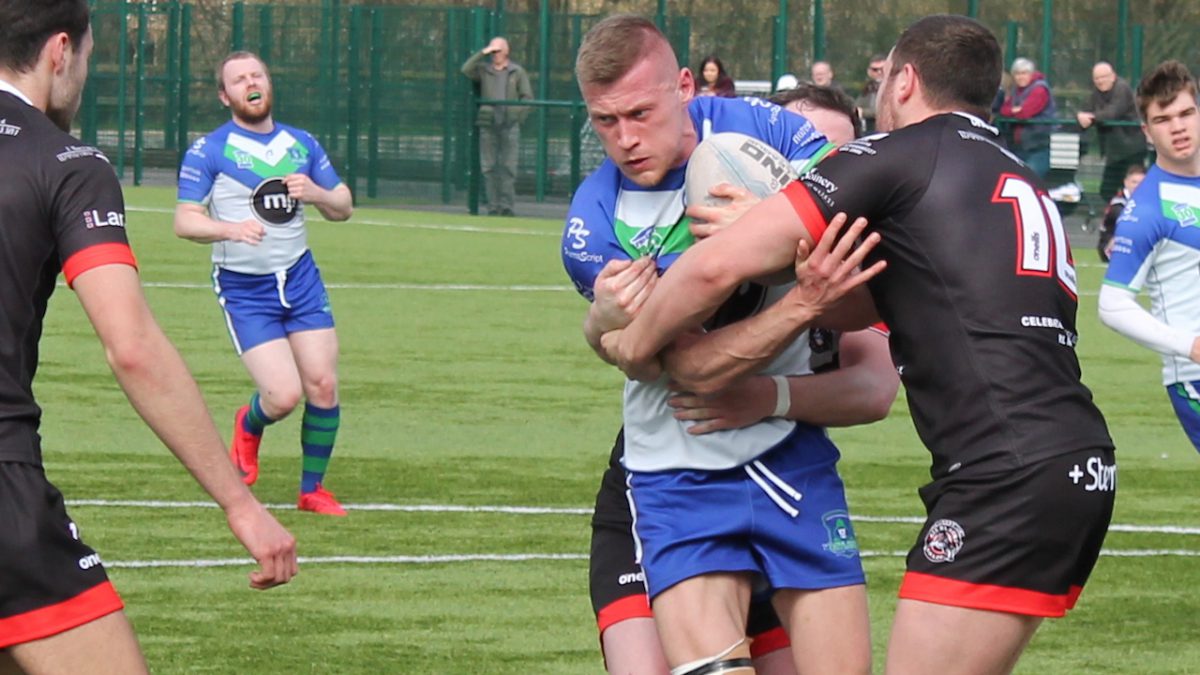 After almost twelve months of defeats Nottingham Outlaws finally had reasons to celebrate when they deservedly secured a 32-26 victory over league newcomers New Earswick All Blacks at York on Saturday.In a tense match the Outlaws had to overcome a poor start before taking the lead mid way through the first half and eventually holding on to record a stunning victory.

The omens for a victory didn’t seem great when the coaching staff were forced to make a number of changes to the team that showed so much promise at Upton the week before. Indeed they had to hand league caps to no fewer than six players as Pete Vickers, Ollie Bos, Padraig Lynch Eddy Daley and Brad Moss all came in for league debuts whilst Tom Sharpe appeared on the bench. Matt Horner and Elliot Lamble came in for their first games of the season as the Outlaws fielded a completely new look backline to the one that missed out so narrowly last week

At one point the game seemed in doubt as the kick off had to be delayed by almost an hour due to travel problems on the A1 and the rushed warm up clearly affected the Outlaws as they dropped the ball from the first pass and Will Holmes swept in for a home try to put the All Blacks 4-0 up with less than thirty seconds on the clock!

Despite the horror start the Outlaws soon settled and the pack began to get on top of their opposite numbers led by some strong work down the middle by skipper Oliver Dale who made good yards every time he latched onto the ball, the busy second rower clearly relishing the task having been elevated to the front row.

Once they settled the Outlaws began to exert more and more pressure on the home line and they eventually made their dominance pay. The try came after a series of back to back sets on the back of two perfect Cunliffe kicks and they were duly rewarded with aq score on the 20th minute when Brad Moss powered over from acting half despite the attention of two defenders. Dean added the extras to put the Outlaws 6-4 ahead.

Buoyed by the Moss try the Outlaws began to take control of the game and they extended their lead when Adam Cunliffe shaped to kick on the last before dummying and scooting over the line for a fine solo effort. Dean again added the extras to put the Outlaws two scores clear at 12-4.

Having built a solid platform the stage was set for more Outlaws scores. However their stranglehold began to lose its grip on the back of a series of penalties indeed five penalties in a row saw them very much on the back foot and Jack Carling went through some poor defence to score and Calham added the conversion peg the Outlaws lead back to 10-12.

As he clock ticked down the Outlaws managed one last attack when the ever-busy Oliver Dale regained possession after a one on one steal and three tackles later Cunliffe doubled his tally with another surging run on the last tackle to extend the lead to 16-10 as the first half drew to a close.

The half time message from the coaching staff was fairly straight forward, The plan was to continue with what had been enthusiastic defence  whilst improving communications amongst the players who were still getting used to each others style of play due in no small part to the number of new faces!

The second half could not have started any better when with five minutes gone Jimmy Goodwin, looking more and more like a natural second rower, trampled over the top of three home defenders to bag a powerful effort. Ciaran Dean banged over the extras to extend the Outlaws lead to 20-10.

The two score lead soon evaporated however as the All Blacks hit back quickly on the back of some loose Outlaws play and Sam Cooper scored for the home side to reduce the Outlaws lead to 14-20.

Despite the set back the Outlaws went back up the field and on the back of more superb Cunliffe grubbers they laid siege to the home line. After consistent pressure Oliver Dale finally got the try his industry deserved when a show and go late in the set saw the prop power over from ten metres out despite the attention of two home forwards. Dean once again did the honours from bang in front

At 26-14 the scene appeared set for a much needed Outlaws victory but the Outlaws once again found themselves, like so many times over the last twelve months, well and truly on the back foot after a series of penalties and controversial decisions saw the Outlaws unable to get out of their own half. The home side eventually capitalised as Danny Bagworth scored to bring the home side back into contention.

At 20-26 the next try was crucial and the visiting supporters hearts where in their mouths as a towering bomb fell invitingly ten metres from the home line. The sighs of relief were audible as winger Matt Horner defused the situation with a superb catch and the sighs immediately turned to cheers as the yoiung winger put his foot on the gas to leave defenders in his wake as he went the full length of the field for a magnificent solo effort!

The Dean conversion from bang in front was a formality and at 32-20 the Outlaws appeared hosed and dry. However a Pete Ritchie try five minutes later put the cat among the pigeons as the lead was cut to 26-32 but some excellent scrambling defence saw the Outlaws hang on for a  much needed and deeply deserved victory.

When the celebrations on final whistle died down there was some discussion as to who would lift the man of the match award. Hooker Nick Tasker had is best game in an Outlaws shirt for many a year but the bubbly deservedly went to Adam Cunliffe with a two try haul and an assured game with both ball in hand and with his tactical kicking.

After the game a much relieved Outlaws coach George Strachan was quick to congratulate his charges adding ” I felt we were the dominant side going forward with the ball, the surface was quick and we looked the fitter side so the penalty count in the game didn’t really help us. We looked a lot more relaxed with the ball this week and didn’t trade errors which I was happy with after last weeks outing. Adam Cunliffe’s short kicking game and control with the ball was really encouraging and he’s building into the halfback role nicely. Nick Tasker also stood out at hooker and led our defence with some driving tackles

Next week the Outlaws are on the road again when they head north into the white rose county, as they take the short trip to Doncaster to face a tough looking Bentley outfit.