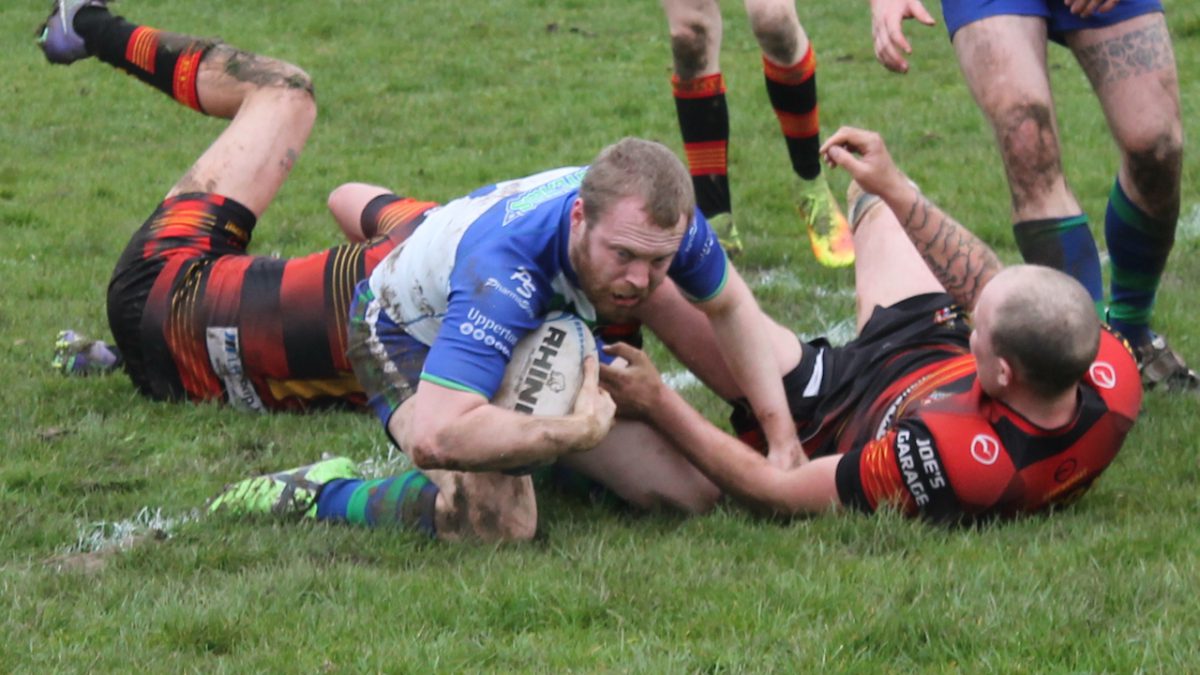 Nottingham Outlaws began their 2018 Yorkshire Premier League campaign with a narrow 16-14 defeat at the hands of newly promoted Upton on Saturday. Despite trailing by twelve points at one stage the Outlaws rallied well and almost snatched it at the death before running out of time.

The Outlaws went into the game with a number of new faces in their line including Oliver McKeag and Tom Kay making their league debut whilst Nick Tasker and Joe Goulty both pulled on a shirt again after missing the whole of the 2017 campaign with injury.

The match started somewhat scrappily as both teams fell foul of the referees whistle in a stop-start opening ten minutes littered with penalties and dropped ball in what were heavy conditions.

After twelve minutes of relative stalemate the match suddenly burst into life when Upton offloaded in the tackle and good hands saw Brendan Roosten go over for a home try, Steven Beale adding the extras to make it 6-0 to the home side.

The score seemed to unsettle the Outlaws and the home side doubled their lead two minutes later when the Outlaws defence missed a relatively straight forward one on one tackle and Ellis Bainbridge waltzed through the Nottingham defence for a try under the sticks for another six pointer.

In the space of two devastating minutes the Outlaws had leaked two quick-fire try’s to leave themselves twelve points in arrears and from this point on they were always chasing the game.

With the home side in the ascendancy there was a danger that the game might run away from them but to their credit the Outlaws defence held firm with forwards Tom Kay, Oliver Dale and Ali Waring in particular all putting in some great shots to blunt the eager home attack.

Having weathered the onslaught the Outlaws at last began to gain some field position of their own and the last fifteen minutes of the half saw them launch a series of raids but they lacked the killer pass and it looked likely that they would go into the sheds scoreless at half time.

As the clock ticked down the Outlaws launched one last attack as a strong surge from Andy Musvaburi drove them deep into the Upton red zone. A quick play saw the ball move down the line to Adam Cunliffe who spotted a gap, twisting in the tackle to plant the ball over the line for a well deserved try. The Dean conversion attempt just went wide but at 12-4 the Outlaws went into the break back in touch with the home team.

The Outlaws used the interval to breathe new life into the pack as Foulkes, Goulty, Scott-Nelson and player-coach Strachan all entered the fray to re-vitalise a pack that had worked so hard to get them back into the game.

On the resumption of play it was essential that the Outlaws continued from where they left off in the first half. However they suffered the opposite, conceding a soft penalty on the halfway line to piggyback the home team into the Outlaws forty and two tackles later Brendan Roosten bagged his second of the game as the home attack capitalised on the visitors generosity!

At 16-4 the Outlaws once more found themselves two scores down but again they rallied with a series of attacks but they failed to find the killer pass and some poor handling saw the Outlaws unable to cross the whitewash despite holding the upper hand.

With the second stanza reaching the halfway stage the Outlaws had failed to carve out an opening but they stunned the home crowd with the best try of the game from deep in their own half.

There seemed little threat when Nick Tasker scooted from acting half inside the Outlaws forty but he showed good speed to break the home line. With some excellent inter passing between Adam Cunliffe and Ciaran Dean the Outlaws raced sixty meters down the field before the final pass saw Ali Waring in the clear and the pacey second rower charged over for a superb team effort. Dean added the extras and at 16-10 the Outlaws were back in the game!

With fifteen minutes to play the Outlaws piled on the pressure and five minutes later they cut the deficit further when a superbly weighted kick over the top by Adam Simm saw the ball bounce up nicely for Ciaran Dean and the elusive full back dived over for a well worked effort. Crucially he just failed to add the extras and at 16-14 the Outlaws still trailed.

With ten minutes to go it was all Outlaws as they threw caution to the wind. Impressive debutant Oliver McKeag almost broke clear but was hauled down by a last ditch effort and they almost snatched it at the death as  centre Andrew Jackson went on a powerful charge down the left channel but he was adjudged to have made a double movement in the tackle as he went over and the chance for a win was gone.

When the final whistle went the travelling supporters were once again left mulling over a narrow defeat that so easily could have been an Outlaws victory. However there were plenty of positives ton take from the opening game as coach Strachan was keen to underline, adding “It’s great to be back playing rugby again. With all the exciting off field stuff with our new ground we need to get it right on the rugby field too. We had a very slow start and leaked points that with a bit more time together we can put right”

The coach was keen to praise his players too adding “A number of our players looked a handful especially as their defence tired, I think Olly Mckeag looked particularly difficult to stop once we got him into the game and Cunliffe, when he chose to run, looked strong and a super competitive Ali Waring deservedly won the man of the match award”

The coach now has another seven days to sharpen his teams attacking potential before they once again travel up to Yorkshire to play newly-promoted New Earswick All Blacks on Saturday.