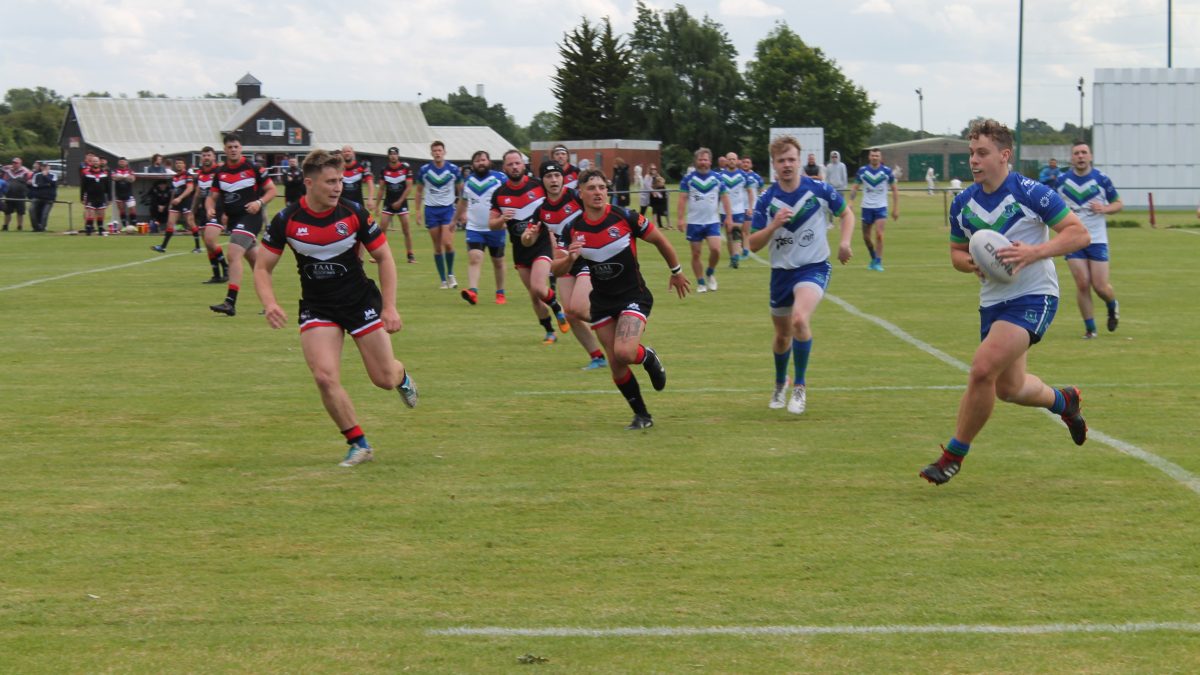 Nottingham Outlaws undertook their longest journey of the season on Saturday when they travelled up to New Earswick in North Yorkshire. In an entertaining game the Outlaws competed well before running out of steam and succumbing to a 30-14 defeat.

Having had a three week break the Outlaws went into the match with a much changed team including a new half back pairing of Gaz Whitfield  and debutant Aiden Foran whilst George Strachan, Albert Paskevic and Alex Whittle made welcome returns to the pack along with a new look bench including Ed Deeks, Ben Smith  and Alessio Cauteruccio.
The team reshuffle and the general Outlaws rustiness meant they lacked cohesion in the opening quarter. Playing into a stiff breeze they struggled to get out of their own forty and when they did manage to get into their opponents half they somehow managed to turn the ball over early in the tackle count.
The result of this was a first half that was played almost exclusively in the Outlaws half and they did well to minimise the damage to 14-0 deficit as half time approached.
Finally as the half time whistle loomed they managed to get a repeat set in the New Earswick red zone and showed what they could do with ball in hand when the ball went left through three pairs of hands as Josh Burgin swept in at the corner to reduce the deficit to 14-4 as the first stanza came to a close.
Despite being under the cosh for much of the first half the travelling Outlaws faithful felt their team were in with a good chance as the second half kicked off. Playing with the breeze at their back the Outlaws began to pepper the New Earswick defence with a series of attacks.
Despite some good early pressure it seemed like the Outlaws might go unrewarded but they snatched a try out of nothing when Luke Wadding made an excellent interception on his own try line before sprinting the full length of the pitch for a great solo effort and when Gaz Whitfield converted the Outlaws were within touching distance at 14-10.
Buoyed by the Wadding try the Outlaws went in search of more points but over-eagerness spoiled a number of good field positions and the Outlaws could not add to their scores.
Having had a good twenty minute spell the Outlaws failed to add to their score and two quick trys by the home side on the sixty  minute mark left the Outlaws well adrift at 26-10 with ten minutes to play.
To their credit the Outlaws hit back with a powerful try from Ronan Treble  who crashed over from short range despite plenty of attention from the home defence to peg the lead back to 26-14.
As the game came to a close New Earswick hit the thirty point mark to end the scoring at 30-14 but in reality the game was a lot closer than the scoreline showed.
After the game there were a number of players in with a shout for the man of the match award. Sam Andrews had another stormer at prop and Freddie Fearnley had his best game yet in an Outlaws shirt. However It was George Strachan that took the bubbly with 80 minutes hard graft in the front row both on attack and especially in defence.