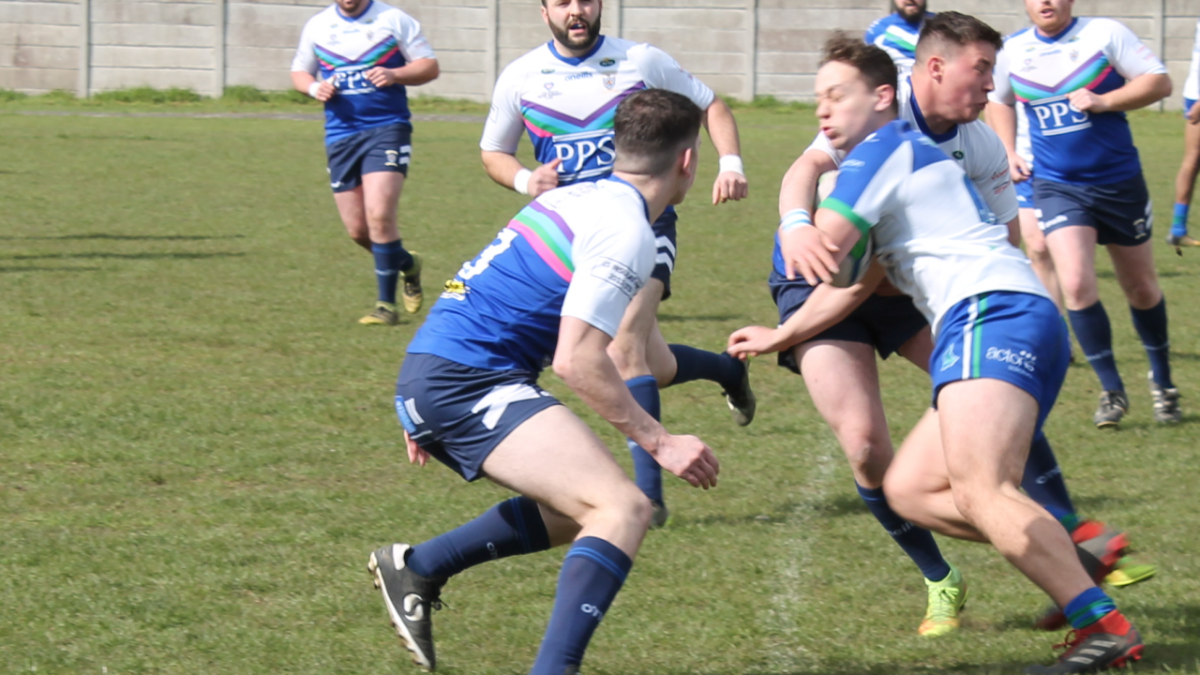 Nottingham Outlaws posted their highest ever score and winning margin in the Yorkshire Premier League at at Lenton Lane on Saturday when they cruised pat an outgunned Queensbury side, recording an emphatic 54-16 victory and their second win on the bounce.

The Outlaws went into the game with a few tweaks to the team that had beaten East Hull the weekend before. Gaz Whitfield teamed up with the returning Clarke Squires in the halves whilst Malachi Goldson came back into the three quarters on the right wing. There were a couple of changes on the bench too with Edward Deeks and Luke Moran making their first appearances of the season.

In the opening exchanges there was little sign of what was to come with the two sides appearing evenly matched as both defences remained on top but already is was developing into an interesting clash of styles with Queensbury outfit prefering to take route one down the centre of the pitch whilst a smaller Outlaws unit were constantly looking to move the ball around in an attempt to find the gap.

After ten minutes of relatively even play the match suddenly burst into life. There seemed danger when Malachi Goldson picked up the ball deep in his own half but the young speedster outfoxed his opposite number then put on the afterburners to scorch fully eighty metres down the pitch, beating two tacklers along the way to plant the ball down under the sticks and the Outlaws led 6-0.

It was a lead they were destined to keep for the remainder of the match.

The Outlaws were now starting to play with growing confidence, Strachan nearly went over from short range but after a period of dominance they couldn’t get over the whitewash and it looked like their dominance was going to go unrewarded. However their efforts finally paid dividends when a loose ball was picked up by Cunliffe who made a short dart before feeding Harry Masini who scored in the corner . Gaz Whitfield curled the conversion between the posts and the Outlaws held a well deserved 12-0 lead.

Stung by this reversal the visitors hit back, helped by some Outlaws indiscipline as they conceded a string of penalties and six again calls that kept the home team well and truly on the back foot and despite some excellent defending they finally conceded as the visitors cut the Outlaws lead to 12-4.with twenty minutes played.

The Outlaws remained under the cosh as the game entered the last ten minutes of the first stanza but a sudden flurry of attacking play saw the Outlaws stretch their lead with two excellent trys. The first came after a Whittle show and go opened up the visitors defence before passing to James Amachree who opened his account for the afternoon and this was followed two minutes later by another long range effort by Malachi Goldsmith who once again set off from fully sixty metres out and was simply too strong and too fast for the Queensbury defence to hold!

When the whistle went for the end of the first stanza the Outlaws went into the changing rooms with a healthy 24-4 lead and the game looked well and truly there for the taking!

The coaching staff used the interval to freshen up the pack with Joe Moran taking over the number nine duties and Tyler Beardsley, Edward Deeks and Luke Wadding all coming into the fray to take on a big Queensbury pack that was already starting to struggle with the pace of the game.

Despite now playing into the wind the Outlaws carried on from where they finished the first half, playing high tempo rugby league and they soon got the scoreboard ticking over when a loose ball was picked up on the halfway line by Cunliffe who steered the ball out to Malachi Goldsmith who scooted over the line to notch a fine hatrick and then with less than ten minutes of the second stanza played James Amachree got on the end of another Cunliffe break to double his tally to two trys as the Outlaws opened up a commanding 36-4 lead.

By now the Outlaws were playing with a level of confidence not seen in recent years and they underlined their dominance with two of the best trys seen at Lenton Lane in recent years.

The first came from deep when Goldson broke down the right wing and whilst getting clattered into touch he released the ball to Harry Massini and the ball swept through three more pairs of hands before James Amachree touched down in the left hand corner.to complete an excellent hatrick.

The next try was arguably as good if not better!

There seemed little on when Massini started a run from deep, but rather than die with the ball the Outlaws kept it alive basketball style and this time there were no fewer than six passes in a sweeping move before Aex Whittle slipped the ball out of the tackle to Sam Andrews who went over for his first of the season as the Outlaws lead stretched out to 48-4.

For the remaining twenty minutes of the game the Outlaws found themselves once again under the cosh as another string of penalties and six again calls starved them of possession and to their credit Queensbury upped their game to reduce the deficit to 48-16 with two well taken trys.

As the clock ticked down there was just enough time for one more Outlaws try and once again it was another Malachi Goldson solo effort that had the crowd on its feet as the young speedster showed pace and strength to notch try number four and close out the scoring with the Outlaws holding a record 54-16 winning margin.

As the players celebrated there was much debate about the man of the match prize. and there were plenty of players with a good shout. Adam Cunliffe had a fine game with ball in hand, setting up a lot of the counterattacking scores and young sharpshooter Gaz Whitfield had demonstrated impeccable kicking prowess with nine conversions from nine attempts. However the bubbly went to Malachi Goldson who notched four superb trys that had the home crowd buzzing!

Next week the Outlaws recent resurgence will be put well and truly to the test as they travel to Wakefield to face lead leaders Westgate.