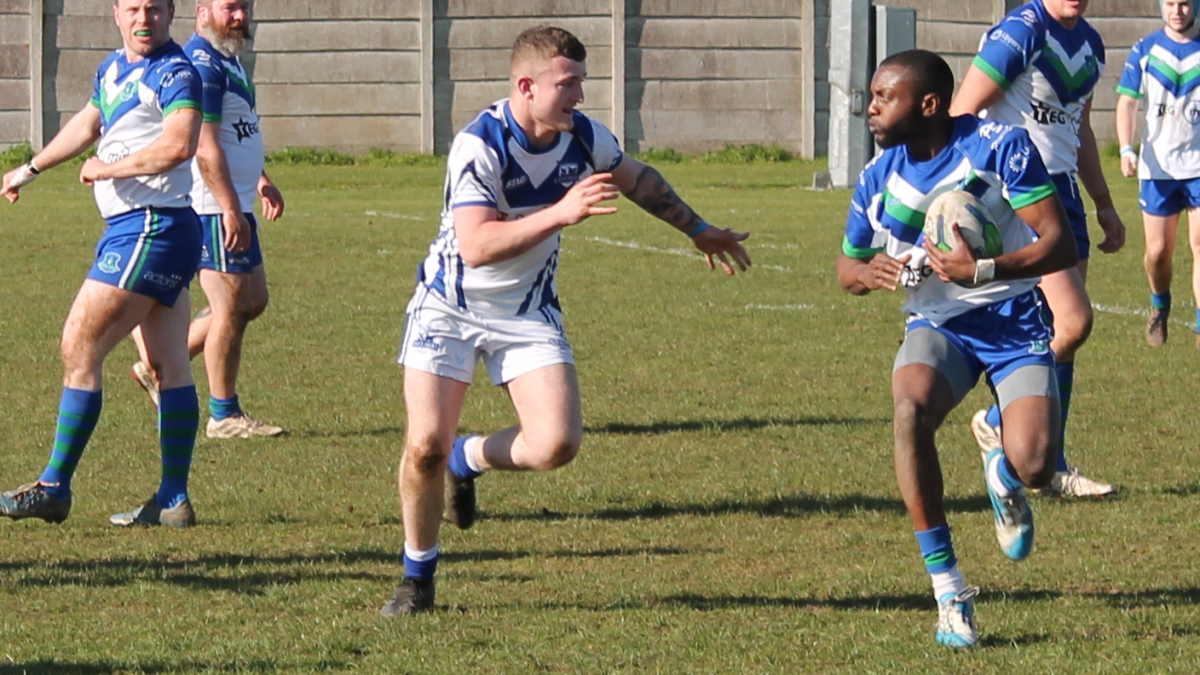 It was a case of third time lucky for Nottingham Outlaws as they notched their first victory of the season in round three of their 2022 Yorkshire Premier League campaign. Indeed they did it in style, running in six tries to post an excellent 34-10 victory over an outgunned East Hull side at Lenton Lane on Saturday.

The Outlaws went into the game with their third half back pairing in as many matches with Gaz Whitfield taking over the scrum half role after Clarke Squires failed a late fitness test and he was joined in the halves by Joe Moran who stepped up from the wing to take over at number six. There were changes on the bench too as Luke Wadding, Alessio Cauteruccio and Josh Adebayo all came back into the side.

The match kicked off in lovely, sunny conditions and the Outlaws immediately went looking for the early score. Indeed they spent the first five minutes camped in the East Hull red zone but they failed to open their account and their early dominance came to nothing.

Despite the setback there was a strong feeling amongst the crowd that this was a game that was there for the taking and two minutes later the Outlaws were back on level terms when Alex Whittle carved open the East Hull defence with a classic show and go from twenty metres out to post a fine try. Gaz Whitfield added the extras from bang in front to put the Outlaws ahead at 6-4 with twelve minutes on the clock.

It was a lead they were destined to hold for the remainder of the game.

Buoyed by their score the Outlaws stepped on the gas and began to dominate possession and field position. However once again they failed to capitalise as they made a series of errors in a frustrating twenty minute period that they were by far the better side but could not grab the points that they deserved.

As the clock ticked down the match suddenly swung in the Outlaws favour with two tries in the last five minutes of the first half. The first came on the back of a well timed Cunliffe pass that saw captain Coryn Ward power over the line for a well taken try and then Alex Whittle once again outfoxed the East Hull defence with a dummy pass. The long striding number thirteen was hauled down just short but on the next play Adam Cunliffe shot through a hole in the East Hull defence for a much deserved Outlaws score.

Gaz Whitfield converted both scores as the Outlaws powered into a three score lead at 18-4 as the halftime hooter sounded.

All talk at half time was of the need to control possession and avoid unnecessary errors but they did just the opposite on the restart, losing the ball when trying to unload in heavy traffic and two tackles later the Outlaws lead was cut to 18-10 and the game once again appeared to be in the balance.

As in the first half, the East Hull score seemed to act as a wake up call to the Outlaws attack and they stormed forward with Alex Whittle once again carving open the East Hull defence only to have the ball pulled out of his grasp with the line at his mercy but the Outlaws were not to be denied and two minutes later George Strachan powered over with a trademark short range effort.

Having got back on the front foot the Outlaws continued to dominate the game, and as the East Hull pack began to tire the match was played more and more in and around the visitors forty metre zone with forwards Jake Hall and Alessio Cauteruccio making plenty of yards down the middle. With the Outlaws dominating the collision the gaps began to appear and Gaz Whitfield opened up the East Hull defence with an outrageous dummy to post a superb solo effort as the Outlaws extended their lead to 28-10.

As the clock ticked down there was still time for one more Outlaws score as Alex Whittle put in a superbly weighted grubber kick into the in-goal area and Albert Paskevic won the race to the ball for a well deserved try to wrap up the game with the Outlaws posting a well deserved at 34-10 victory and their first league points of the season.

As the team celebrated a well earned victory there was a brief pause as the players waited for the man of the match announcement. There were plenty of players in with shout with Gaz Whitfield, Coryn Ward and Alex Whittle all having their best games of the season so far. However it was Albert Paskevic who took the bubbly with an excellent performance on his first stint at prop forward as well as a well taken try to open up his account for the season.