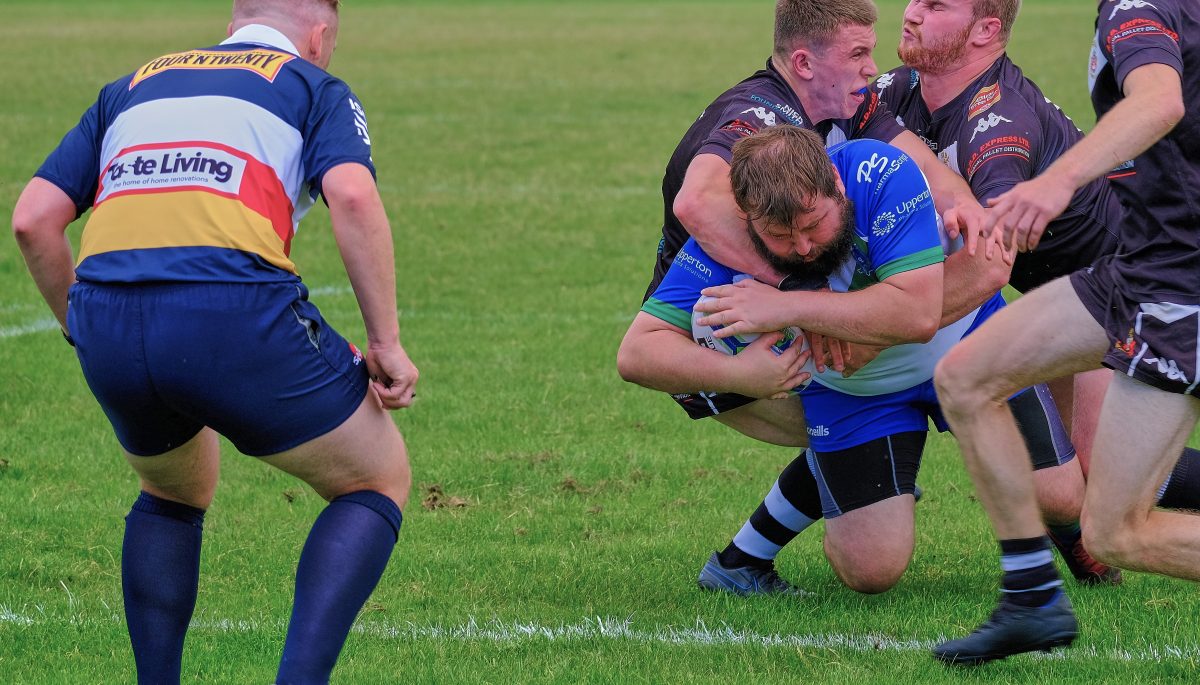 Nottingham Outlaws entertained league leaders Siddal at Lenton Lane on Saturday hoping to end a four match losing sequence. However, despite battling hard they were no match for their unbeaten visitors and the outgunned Outlaws ended up on the wrong end of a 46-6 scoreline.

The Outlaws were forced into additional changes on the morning of the game when James Amachree failed a fitness test on the morning of the match. The loss of Amachree meant player coach Adam Cunliffe teamed up with Charlie Clarke in the half back roles with Jimmy Goodwin coming back into the side forming a new-look center partnership with Gaz Whitfield.

In the forwards Tyler Beardsley came back into the front row alongside youngster Joe Moran who pulled on the all-important number nine shirt. The back three of Ward, Treble and Whittle remained unchanged from last weekend. There was plenty of size on the bench with James Hood returning from injury joining James Gisborne and Steve Page as forward replacements with utility back Sailosi Wakawaka completing the seventeen.

If the Outlaws were to stand any chance of getting something out of the game they needed to make a good start, but they did the exact opposite, struggling to advance the ball out of their red zone from the kick off and when the visitors took possession they quickly posted their intent when they burst through some weak home defending to open up a 6-0 lead with two minutes on the clock.

Stung by this reversal the Outlaws stormed back up the pitch and within a minute of the Siddal score they scored a try themselves; a short pass from acting half caught the visitors napping as prop Sam Andrews latched onto the ball to crash over for a well taken effort. Gaz Whitfield added the extras to level the scores at 6-6.

Unfortunately for the Outlaws it was to prove the only time they were destined to get over the try line.

In recent weeks the Outlaws have found themselves leaking trys at alarming rates in certain stages of the game and in the remaining minutes of the first half it happened again. With ten minutes left on the clock the home defence melted away as the rampant visitors ran riot, posting no fewer than four unanswered trys in a devastating spell that put the game well and  truly beyond reach of a shell-shocked Outlaws side.

Mercifully the referee drew the first half to a close but with the scoreboard registering a 30-6 deficit there was little the coaching staff could do other than throw all of their substitutes into the fray in an attempt to get something out of the game.

The pace of the game slowed visibly in the second half as the heat and humidity began to take its toll and to be fair to the Outlaws they began to get to grips with the visitors attacks as Gaz Whitfield and Charlie Clarke shored up the edge defence with some good communication and tackling holding the Outlaws line intact. However on attack the Outlaws could make little or no impression on the Siddal line and the chances of an Outlaws score always looked remote.

After spending so long encamped in their own half the Outlaws defence finally began out of steam and the visitors’ superior fitness began to make its mark. Once again the score board began to tick over as an unforgiving Siddal team ran in another three trys to close out the game with a commanding 46-6 victory.

After the game the players gathered to hear who was going to take home the man of the match award. There were a few players in the mix with Adam Cunliffe getting a mention on attack and Coryn ward and Charlie Clarke showing up on defence. However the bubbly deservedly went to centre Gaz Whitfield for some great work in defence and with ball in hand

Next weekend the Outlaws travel up the M1 to face Brighouse and will be looking to avenge a 34-12 home defeat by the newly promoted outfit.