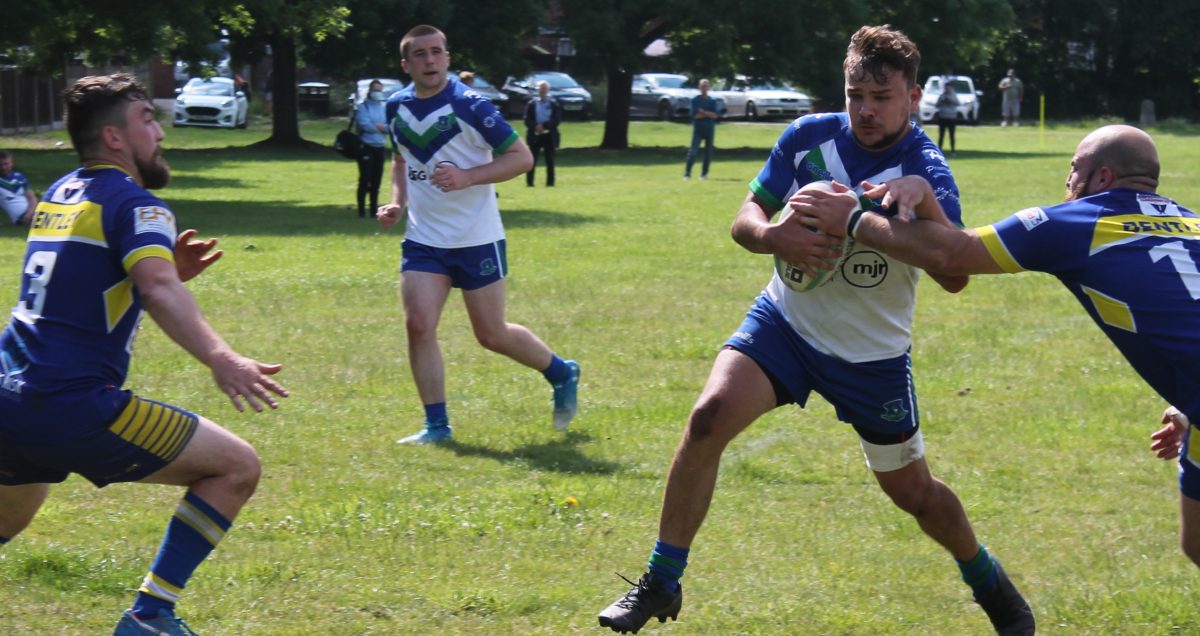 Nottingham Outlaws travelled up the A1 on Saturday to face Doncaster outfit Bentley on the back of three successive Yorkshire Premier defeats. Despite a much improved performance they could not overcome a physically dominant opposition and that elusive win still evaded them as they crashed to a 30-4 defeat.

After last week’s postponement the coaching staff made a number of changes to the team that lost heavily at Queensbury last time out. There were a couple of debutants on show with Andrew Prosser and Malachi Goldson making their first bow in the senior squad after impressing in the Development team in recent weeks. There were a few positional changes too with James Amachree having a first run out in the all important number nine position.

The match couldn’t have got off to a worse start when straight from the kick off the big Bentley pack stormed into the Outlaws red zone. Twice in succession the Outlaws failed to deal with the last tackle play and after two repeat sets they leaked the inevitable try and it was 4-0 to the home team with the Outlaws yet to lay a hand on the ball.

Despite the shaky start the Outlaws hit straight back and nearly equalised with Harry Masini held up over the line and Andrew Prosser coming close as the match developed into an interesting clash of styles between a big Bentley unit playing through the middle and a more mobile Outlaws team that were looking to make inroads out wide. Indeed the match was very even for the opening quarter with neither side gaining the ascendancy in what was developing into an absorbing encounter.

After twenty minutes of stalemate the home side suddenly gained the ascendancy with two trys in a ten minute spell. Both trys were from short range, with the big home forwards crashing over despite the attention of several defenders as the Outlaws defensive line ran out of steam and started to struggle against their larger counterparts.

When the half time whistle went the Outlaws were clearly up against it. Not only were they now 16-0 in arrears but they were facing a mounting injury toll. Stand off Sam Dennison had left the field with five minutes on the clock and could take no further part in the game and he was joined by prop Will Gray, leaving the Outlaws with only two interchange options from the twenty minute mark.

With limited options the Outlaws coaching staff did their best to breath new life into their charges with Josh Fearnley and Josh Adebayo coming on to add some pace but really they could have done with a couple of big forwards to add some beef to a pack that was being outgunned down the middle.

With the Outlaws sixteen points in arrears it was vital that they got the first score in the second stanza if they were to stand any chance of getting something out of the game. They did come close with Freddie Fearnley and Andrew Prosser both making inroads in the red zone but they once again succumbed to the killer blow that effectively sealed the match for the home team.

The problems started when Steve Page saved a certain try with a high shot on his opposite number and with the Outlaws a man down the home side took advantage to score two trys and edge out to an unassailable 26-0 lead.

Despite the match having slipped away from them the Outlaws did not throw in the towel. They threw everything they could at the home side with Freddie Fearnley and Malachi Goldson in particular standing out in another strong period for the Outlaws.

As with the first half, the strong showing from the Outlaws failed to produce a try and they were hit on the break again as the home lead stretched out to 30-0 despite another period of consistent Outlaws pressure.

As the game entered the closing stages the Outlaws once again went looking for the elusive try that their efforts deserved and finally got it!

The score came after some consistent field position in and around the Bentley twenty saw the Outlaws win a penalty and from it they finally managed to get on the scoreboard. The move started on the second play and a superbly weighted pass from James Amachree saw Andrew Prosser latch onto the ball at pace and scorch over for a well taken try on his first team debut.

The final whistle went soon afterwards and whilst the scoreboard registered a 30-4 scoreline it didn’t do justice to what was a gritty performance from an improving Outlaws side.

After the game the players waited eagerly for the man of the match award. Both Harry Masini and Andrew Prosser were in the mix with both having fine performances but prop Sam Andrews took home the bubbly with yet another fine performance against a no-nonsense Bentley front six.

After the game Outlaws player coach Adam Cunliffe was far from disappointed with his team’s efforts commenting ” I thought today was a much improved performance, both with our hard work and by controlling the ruck better than previously. The effort from the squad was really pleasing with two injuries leaving us with a depleted team for most of the game. I believe we are definitely on an upwards trajectory if we keep working hard!”

Next Saturday the Outlaws return to Lenton Lane and they will be looking to break their losing sequence against a Siddal team that currently sits at the top of the division.