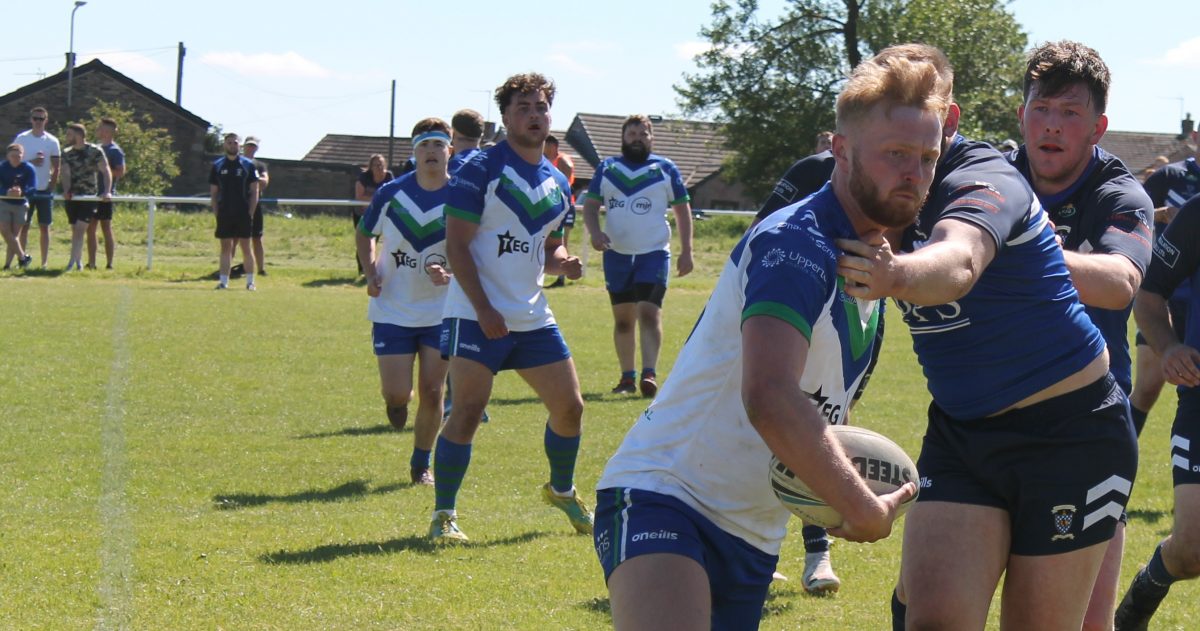 Nottingham Outlaws suffered a third successive defeat in the Yorkshire Premier League on Saturday when they proved to be no match for a powerful Queensbury outfit. Despite plenty of effort the home team were just too big and too fast for the Outlaws to contain and they succumbed to a 64-10 reversal, their heaviest defeat of the season.

The Outlaws went into the game with a number of enforced changes as a mini injury crises hit the squad. Connor Melia came into the centres on debut after showing up well in the Development squad in recent weeks alongside fellow debutant Paddy Ziegler. This freed up Coryn Ward to move into the second row with Ronan Treble.

There were changes on the bench too as Freddie Fearnley continued his development with a spot on the bench alongside debutant Will Gray who signed from Dodworth this week and was pressed into immediate action.

The match kicked off with the Outlaws playing down the slope but even in the early exchanges it was clear that the Outlaws were in for a tough day at the office. In almost every position the Queensbury side were much bigger and much faster than their Nottingham counterparts and they made huge inroads into the Outlaws defence with every carry.

With a monopoly on possession and field position it was only a matter of time before the scoring started and with only five minutes on the clock the home side opened their account with a powerful surge over the line from short range.

There was no respite for the Outlaws in the opening quarter as the home side continued to dominate proceedings, forcing several back to back sets and with it more scores soon followed. Indeed within three minutes of the opening score the home team doubled their lead and they piled on the pressure scoring another three quick-fire trys. With twenty five minutes played the scoreline stood at 28-0 to the rampaging home team and there seemed little the Outlaws could do to stop the rout.

With the temperatures rising the Outlaws began to ring the changes form the bench with Abe Sua and Wil Gray coming off the bench to add some size to an outgunned Outlaws pack.

The entry of Sua and Gray seemed to do the trick for a while. Some excellent shots from Gray in particular steadied the Outlaws defence and at last they began to get the measure of the home side.

Indeed the play began to even up for a while as the Outlaws probed for an opening. Twice the Outlaws were held up over the line and their efforts were finally rewarded on the stroke of half time. A superb drive by Charlie Clarke put the Outlaws in great position and after a few close efforts player-coach Adam Cunliffe put in a neat grubber from close range that he collected himself to dive over the line. He then added the extras from bang in front to reduce the deficit to 28-6 as the first stanza drew to a close.

The improved performance at the end of the first forty carried on into the start of the second stanza. The Outlaws were doing all of the pressing at the start of the second stanza, coming close on several occasions before a show and go by Alex Whittle saw the long-striding loose forward cut through the Queensbury defence to crash over. to reduce the deficit further to 28-10.

After clawing their way back into the game the visiting fans were hoping that their favourites would continue to make inroads into the deficit but unfortunately it was not to be.

The home side, stung by the reversal, roared back up the pitch. Using the slope in their favour and their superior size and speed they simply blew the Outlaws away in a devastating twenty minute spell.

As the temperature climbed the Outlaws defence wilted in the face of a non-stop onslaught. Indeed there was little they could do to stop the home side from scoring as put the Outlaws to the sword, running in no fewer than seven unanswered trys to close out the game as the scoreboard registered a 64-10 scoreline in the home teams favour.

Despite the defeat there were still some stand out performances in the face of the home barrage. Freddie Fearnley continued to show great promise after only a handful game of rugby league games whilst Charlie Clarke worked tirelessly on attack and defence all afternoon. However the man of the match bubbly went to Will Gray who stood out whilst making a fine debut and will no doubt make a big impact when he settles into the side.

The Outlaws now have a week to lick their wounds before another stern test when the entertain East Hull at Lenton Lane next Saturday (2.30pm).