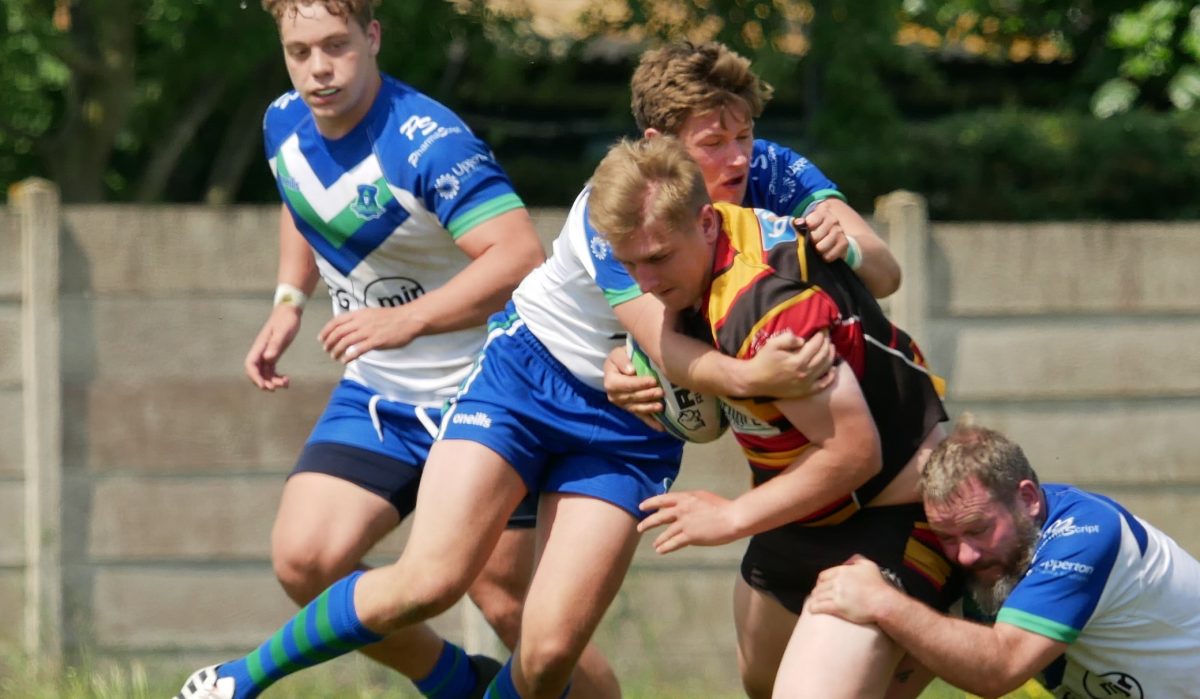 After almost two years in waiting the local rugby league supporters were finally able to attend a live game at Lenton Lane on Saturday as Nottingham Outlaws entertained high-flying Brighouse Rangers in a Yorkshire Premier League Fixture. Despite the hot weather, both teams put on an excellent display of rugby league football but the Outlaws eventually finished second best to an extremely well drilled Rangers outfit who inflicted a 34-12 defeat on the hardworking home side.

After a three week gap in the fixture list the Outlaws went into the game sporting a number of changes to the squad that lost at Siddal last time out, including no fewer than four players on debut in the 17 man match day squad. In the backs both wingers were pulling on an Outlaws shirt for the first time, with Will White on the right hand side and Aiden Porter-Holborn on the left. The other pair of debutants were Louis Wilson and Harry Masini who both were making their Outlaws bow from the bench.

Other changes saw Jimmy Goodwin come into the centres for the first time this season whilst player-coach Adam Cunliffe continued at number seven pairing up with Sam Dennison in the all-important half back roles. There were a few changes in the forwards too with George Strachan coming back in at number nine and Ronan Treble pairing up with James Hood in the second row.

The home faithful probably knew it wasn’t going to be their day when James Hood tweaked a hamstring in the pre-match warm up which meant Abe Sua was rapidly elevated into the starting line up and right from the off the Outlaws were up against, spending most of the opening exchanges in and around the home red zone but some good defence kept the home line intact.

In a match played in four quarters and sweltering heat both sides put on some excellent defensive work and it was the Outlaws who came closest to opening the scoring when Adam Cunliffe just failed to collect a chip over the top with the line at his mercy and then the elusic=ve player-coach broke through the line but couldn’t find anyone in support as another chance went begging.The first quarter finished with the two teams scoreless as defences remained on top.

The second quarter was almost the complete opposite to the first and it proved to be the defining sector of the game. The problems started as the Outlaws tried to offload in their twenty metre zone but lost the ball in the process and with it an opening try for the visitors. Buoyed by this success the visitors began to pile on the pressure allowing full back Lucas Birch to cut loose. Indeed the elusive number one was clearly too hot for the Outlaws to handle as he extended their lead to 10-0 on the back of another penalty.

The two Rangers trys seemed to knock the stuffing out of the home defence and their tackling in the second quarter could only be described as woeful as the visitors scored two more trys to stretch the lead out to 20-0 and the game was effectively over after this twenty minute horror show!

The half time break allowed the home coaches a chance to bring some fresh faces off the bench with Abe Sua and Tyler Beardsley coming on to relieve the forwards who were beginning to suffer in the heat.

The Outlaws finally managed to put in some attacking plays as the third quarter unfolded and they opened their account when Adam Cunliffe grabbed a well deserved try after coming close in the first quarter but two more Rangers trys of the back of yet more sloppy defending soon snuffed out any hopes of a home revival as the third quarter came to a close with the Outlaws now trailing 30-6.

As the game entered the final quarter the result was no longer in doubt and the pace visibly dropped as the players , not unsurprisingly, began to run out of steam in the sweltering heat. However there was still time for both teams to add one more score eech, with Harry Masini capping his debut with a fine try to take the Outlaws into double figures and wrap up the scoring at 34-12 in the visitors favour

After the game the players waited eagerly to learn who was going to pick up the man of the match bubbly. There were a few players in the mix but the award deservedly went to rookie forward Tyler Beardsley who came off the bench and put in an excellent stint on attack and defence.

Next week the Outlaws will be looking to reverse two match losing streak as they head up the M1 to play Queensbury.