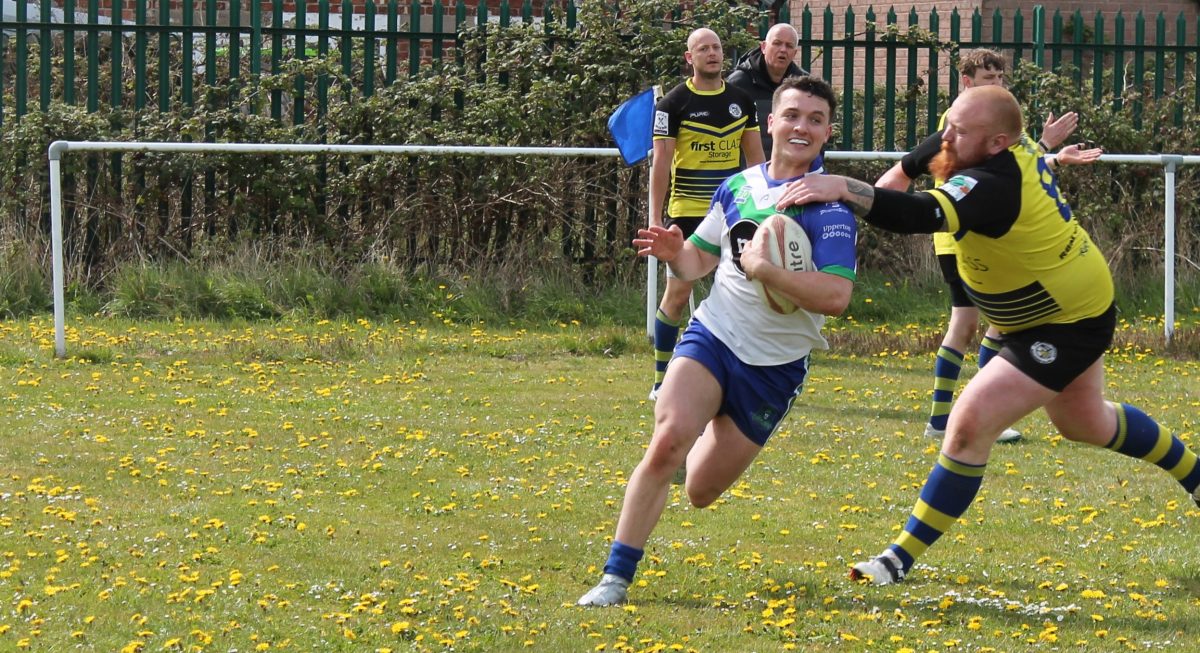 Nottingham Outlaws made it two wins from two in their pre-season fixtures with a hard earned 34-12 victory over Moorends on Saturday leaving coach Adam Cunliffe confirming his team were “ready and can’t wait to return to action” after a break of almost two years since they last played a Yorkshire League Premier game in Nottingham.

Coach Cunliffe has assembled a new-look squad with almost fifty players to pick from and he decided to limit his matchday squad to twenty as the team headed up to West Yorkshire. There was a new centre pairing of Ward and Radegonde whilst Joe Moran stepped into the all-important number nine slot after the young gun made such a good impact on his Outlaws debut last weekend.

Pre-match preparations were not the best with several squad members getting caught in traffic which meant that the kick off was delayed and when they did finally start the game the Outlaws were immediately under the cosh.

Right from the get-go it was evident that the big but mobile Moorends team were going to prove much more of a handful than last weeks opponents.Indeed with only five minutes on the clock the Outlaws found themselves 6-0 down when a strong carry from the home side saw them breach the Outlaws defence which was clearly not yet focussed on proceedings!

The early reversal seemed to provide something of a wake-up call to the Outlaws. They immediately responded with some nice free flowing rugby finished off by Gaz Whitfield who put in a lovely crossfield kick that Adam Cunliffe latched onto to level up the scores and then two minutes later Ronan Treble pushed the Outlaws in front with a hit and spin from short range that ended with him crashing over the line despite plenty of attention from the home defence. Whitfield added the extras to make it 12-6 to the Outlaws who were now in front for the first time.

It was a lead that the Outlaws were destined to hold for the remainder of the match.

The match was played in four twenty minute “quarters” and the second quarter continued in similar vein to the first, with Moorends putting in lots of big drives down the middle to pressure the Outlaws who, in response, launched a series of attacks from deep using their superior speed and handling skills.

Indeed it was the speed and quick play the balls by the Outlaws that were starting to get the upper hand on the less mobile home side and as they tired the Outlaws began to cut free and two quick tries, one a short range effort from Steve Page and the second a great take from Coryn Ward after a steep up and under saw the Outlaws well in control at half time with a 22-6 lead.

The third quarter was something of a mixed bag as a series of penalties and some lost ball resulted in the Outlaws spending most of the period in and around their red zone. However it was a chance for the coaching staff to see how well their defensive formations were working and by and large they did well, limiting the home side to one try and after some heavy pressure the Outlaws finished the quarter 12-22 in front despite rarely threatening the home line.

The final quarter belonged very much to the Outlaws as their speed and fitness saw them finish the game on top as the home side ran out of gas. Plenty of forays, led by the elusive Joe Moran straight from acting half, saw them cut loose with big Abraham Sua crashing through some tiring home defence to open his account for the afternoon and then winger Charlie Clarke finished off a lovely flowing move down the right with a well taken try, rounding his opposite number with some great footwork.

Gaz Whitfield added the extras to make it five from six conversions and round off an excellent day at the office for the young sharpshooter.

The final hooter sounded with the Outlaws registering a much deserved victory at 34-12 and full of confidence with the new Yorkshire Premier Season now less than a week away.

During the post-match press conference coach Adam Cunliffe announced his satisfaction with how the game had gone, commenting “It was a pretty comprehensive performance today and I thought we built nicely on last week. We had a bit of adversity to deal with both pre-match and in the game itself, and we dealt with that really well. I thought our flat and fast footy was strong again and our intent to get down and play the ball was really good. I also thought our defensive structure was better than last week, with improved awareness of width from our edges”

Commenting on the In terms of individual performances he added “I thought Gaz and Charlie got our sets going really well and our middles worked strongly as a unit. Man of the Match was Abe, he had to play bigger minutes than first planned but he did really well and was very hard to stop with the ball”

When finally pressed on his thoughts for the coming season and what his first choice squad might look like, the young coach was clearly not giving much away, adding with a wry smile “We have had a nice start to the year and we can’t wait to make our return to Lenton Lane next week. With 45 players to choose from next week there’s going to be lots of selection headaches but it’s awesome to have that buzz about the cub”

Next week the Outlaws kick off the new campaign with a home match against New Earswick All Blacks.