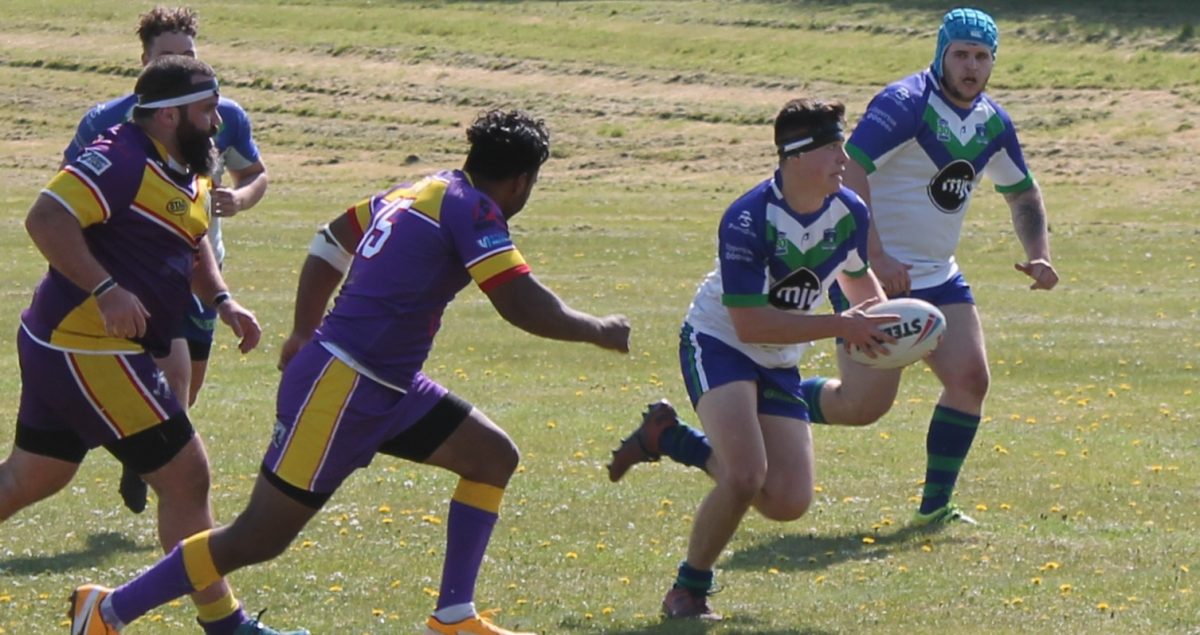 The local rugby league scene returned to action on Saturday after a break of almost two years as a new look Outlaws team travelled up the M1 for a pre-season friendly against Sheffield Forgers. In perfect playing conditions and with plenty of new prospects on show, the Outlaws soon hit top gear and celebrated their return to action with an excellent 56-4 victory against their Yorkshire opponents.

Newly appointed player-coach Adam Cunliffe had patiently waited since August 2019 to lead his charges into action and his first task was a selection headache, limiting his matchday squad to 26 players from the large number of new recruits that have swelled the ranks in recent weeks. Indeed the squad that headed north on Saturday morning contained no fewer than 12 players on debut!

Despite the new faces on show it was the ”old heads” that hit the ground running. Leading the way was George Strachan who picked up from where he left off in 2019, orchestrating things superbly from acting half and with the rangy Alex Whittle in tow the pair soon got the scoreboard rolling when an inside pass from Strachan gave Oliver Dale the privilege of scoring the first Outlaws try since their long hibernation to make it 6-0 with less than 5 minutes on the clock.

Straight from the restart the Outlaws doubled their lead when trademark ‘show and go’ from Whittle saw the number six ghost through the home defence to double the lead and when Mike Stewart crashed over from short range the Outlaws lead had stretched to 18-0 with the home team hardly laying a hand on the ball!

A mix up on the re-start saw the Chargers reduce the deficit to 4-18 but it was a rare respite for the home side and the first quarter finished with the Outlaws fully in control of the game and 18-4 ahead.

The second quarter was a more even affair as the Chargers began to even up possession and they were helped by some sloppy play. Indeed the Outlaws turned over the ball early in the tackle count on three successive occasions and with a couple of penalties to boot they spent long periods without the ball. However it was a good chance to test their defensive formations and they tackled well to keep the home side out and then hit back on the stroke of half time when Brandon Whittaker offloaded to Ronan Treble to mark his debut with a fine try to register a half time score of 24-4 in the Outlaws favour.

The half time break gave Cunliffe his first opportunity to test his squad in depth, bringing on no fewer than 10 fresh faces onto the pitch.

Despite the changes the Outlaws continued to dominate proceedings and Sam Andrews celebrated his return to the Outlaws fold after a few years away with an excellent short range effort. The Outlaws then showed that they could also move the ball across the pitch and they did just that with winger James Amachree opening his Outlaws account with a superb finish to make it 32-4 to the Outlaws.

Try as they might the Chargers could not get over the Outlaws line despite plenty of home pressure, with eager tackling by the Outlaws once again nullifying the home attack.

Having weathered plenty of home attacks the Outlaws cut free from their own half and debutant Joe Hunter superbly carved open the Chargers defence with two dummies to open up a huge hole in the defence before sprinting fifty metres to score an excellent solo effort.

As the match entered the closing stages the young guns in the Outlaws team began to cut loose against the rapidly tiring home side with rookie half back Joe Moran terrorising the home defence with his elusive running in and around the ruck and on the back of one of these forays when James Amachree used his pace bring to make it 44-4 to the Outlaws and then they hit the half century as Sailosi Wakawaka scored unopposed as he sprinted fifty metres.

As the clock ticked down there was just enough time left for one more score and what a superb effort it was, with debutant Brandon Whittaker throwing an outrageous ”no look’ reverse pass out of the back of the hand to free up James Amachree in support and the young winger marked an excellent day at the office by completing a hat trick.

The full time hooter sounded with the scoreboard registering a highly satisfying 56-4 score in the Outlaws favour.

As the smiling players left the pitch coach Cunliffe knows he will have tougher assignments to come in the fast looming Premier league campaign but he looked more than satisfied with events on the day and the young tactician was already focusing his attention to next weeks friendly at Thorne.