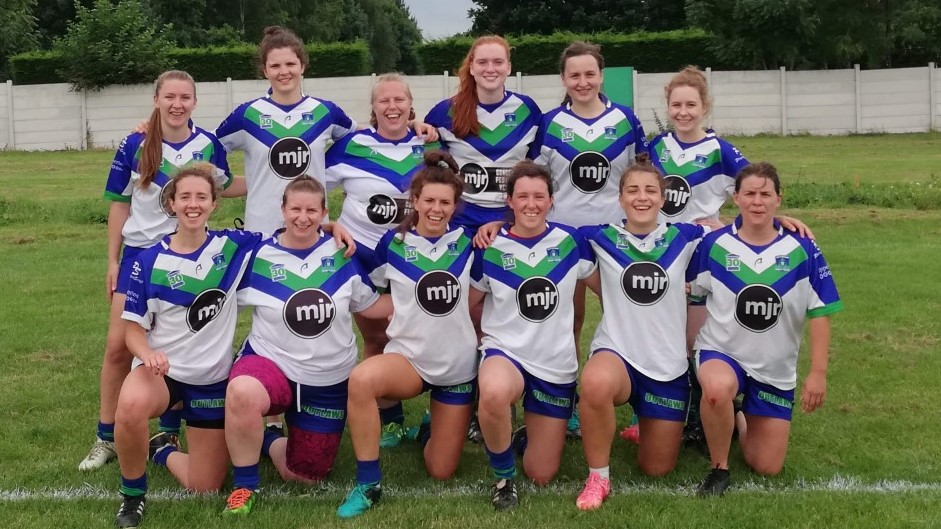 The Nottingham Outlaws Women’s team hosted the Royal Navy on Saturday in what turned out to be a free-flowing display of superb attacking rugby from both sides. The Outlaws team was subject to a few changes following their win against Dearne Valley. Josie Tokarski and Alina Ludviga, who are new to rugby this season, were handed their debuts. Whilst Hannah Prescott, Ellie Readman, and Kerri Bright, who have experience playing for local rugby union teams, were handed their rugby league debuts.

Both teams exchanged possession in the opening minutes, with the Navy striking first. Some hard carries up the middle allowed an overlap, which was then fully exploited, giving the away side a four point lead. However, the Outlaws were quick to regain possession, and it didn’t take long for them to respond, which became characteristic of the game. Following some very strong carries from the Outlaws Gina Watson and Zoe Rose- Higgins, similar to the oppositions early score, an overlap was created. An early attacking kick from Juliet Porter was chased hard by Jodie Dimmock, who scored her first try of the afternoon.

It didn’t take long for Dimmock to double her try scoring account, as quick hands down to right edge put Rebecca Humphreys into some space, finishing her run with a neat offload back inside to the supporting full back, allowing Dimmock to race away for her second try.

However the Navy were always threatening with possession and it didn’t take them long to reduce the deficit, with a converted try keeping them within reach of the visitors.

Both teams brought forward packs who were able to gift the halves good field position, but again it was the Outlaws fullback who found herself on the score sheet. The Outlaws earnt a drop out following a determined chase by Watson. With good field position for the following set,  quick hands from Hannah Prescott saw Dimmock walk in untouched, registering her hatrick. A change in goal kickers saw Ellie Readman register the home sides first conversion, giving a more comfortable lead.

The Navy again, didn’t give in and responded with another converted try.

With the markers unorganised, a 60 metre run from dummy half Violet Coppin saw the home side just 10 metres out from the oppositions try line once more, allowing Watson to crash over under the sticks.

There was another try apiece before the half time whistle, with the Navy carrying strong up the middle. Following their score and a few exchanged sets, the Outlaws saw themselves with a scrum on their own try line. A dummy from halfback Porter took some pressure off the home side, with the next tackle taking place over half way. The ball was subsequently spread wide to winger Readman who beat the sliding defenders to score. Converting her own try saw the home side go into half time with a six point lead (26-20).

The second half followed a similar pattern to the first, with both teams having strong runners and well organised attacking plays. For the home side Dimmock wasn’t finished scoring points. From a scrum a superbly timed pass from Prescott put Dimmock through the defensive line, whose pace was too much for the visitors allowing her to dot down under the sticks.

Despite Dimmock’s name dominating the score sheet, her final try of the afternoon came following some great hands from the home team. A strong carry and offload from Humphreys put the visitors on the back foot, then a quick inside ball from Prescott found the ever present fullback, who danced her way to the try line for her fifth try of the afternoon.

The final points of the afternoon were registered by the Navy, following multiple repeat sets on the home teams try line, putting them withing two points of the home side (38-36). However some strong defensive effort, notably from debutants Ludviga and Tokarsi, kept the home team from conceding in the final minutes.

The Outlaws player of the match had to go to fullback Jodie Dimmock, who was not only a huge threat when attacking, but she also stood up defensivly making multiple tackles once the defensive line was broken, allowing the home side to retain their lead. Special mentions also went to Ellie Readman with a 5/5 conversion success rate, as well as to Josia and Alina, for not taking a backwards step, and getting stuck into their first rugby match.