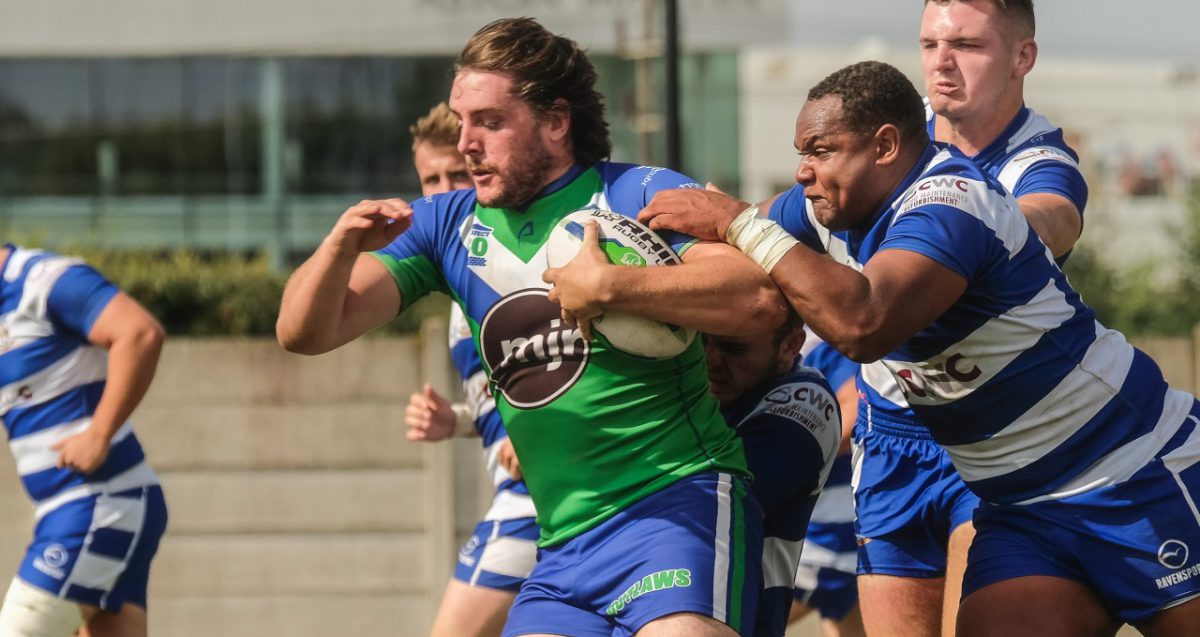 Nottingham Outlaws search for an elusive victory is finally over after they ended a four match losing streak with a narrow 26-24 victory over Siddal at Lenton Lane on Saturday. In a hugely entertaining game the Outlaws came from behind on two occasions to finally edge ahead of their Yorkshire rivals before surviving a late onslaught to record a well deserved victory by the narrowest of margins.

The Outlaws went into the game with yet more changes to the line up including Gareth Whitfield on debut and the return of Matt Horner and Jon Christie for their first games of the season.  Other changes saw Blake Turner and George Strachan team up in the halves for the first time and Jack Mcleish move into the centres to pair up with Joe Goulty.

In recent weeks the Outlaws supporters had become somewhat accustomed to poor starts so they could be forgiven for choking into their cups of tea when the Outlaws scored straight from the kick off. A turnover saw Matt Horner receive the ball and with his first touch of the season he scored a fine try converted by Turner to put the Outlaws 6-0 ahead with many of their supporters still taking their seats!

Whilst the good start was something the Outlaws supporters were not accustomed to, the loss of the ball from the re-start is now more than familiar to the long suffering fans and within a minute of scoring the Outlaws knocked on from the kick off and from the resulting scrum  James Dodd waltzed over the line for a leveller at 6-6 with five minutes played.

Stung by this reversal the Outlaws roared back up the pitch and looked like they might score when Oliver Dale ran into space but the ball went to ground when a try looked certain.

Having failed to make the most of some great field position the Outlaws were duly punished when Siddal crept into the lead with only their second attack of the game when James Dodd again used his pace to open up the Outlaws defence as the visitors went 10-6 ahead.

Despite falling behind the Outlaws were starting to dominate the collisions in the forwards and began to make some serious inroads into the visitors defence. Following a great charge by the long-striding Kyle Widnall the Outlaws levelled when fullback Adam Cunliffe used great vision, seeing  his opposite number  number was out the line he chipped over the top into the in goal area and Oliver Dale won the footrace to touch down and level the scores at 10-10 with thirty minutes to play.

Having got back on terms the Outlaws could not build on their period of dominance and once again they put themselves under more and more pressure, losing the ball and also gifting some soft penalties. Indeed in the final ten minutes of the half they hardly touched the ball and it came as no surprise when James Dodd again used his pace to yet again open up the Outlaws defence and restore the Siddal lead at 16-10 as the first half ended.

With the game evenly balanced the coaching staff made a few key changes to the line up with Strachan switching to hooker following an injury to Jamie Muggleton whilst Jon Christie and Mike Hyatt slotted into the pack to add some fresh pace and power.

The changes to the line up had an immediate impact on the restart. With Christie and  Hyatt both making great yard up the middle the Outlaws started to take control and after eight minutes of the second stanza the Outlaws reduced the deficit to 14-16 when long pass from Strachan went to ground and youngster Josh Burgin was on hand to pounce for his first senior try in an Outlaws shirt.

Having taken the early initiative the Outlaws began to turn the screw and three minutes later they crept into the lead for the second time in the game when Mike Hyatt showed his power and footwork, latching onto a ball fifteen metres out and simply charging over the line despite the attention of two defenders. Turner converted from bang in front and the Outlaws found themselves 20-16 in front.

Despite falling behind the visitors were not going to surrender without a fight and yet more loose play from the Outlaws saw them well and truly defending for their lives. A wonder tackle by Jack Mcleish managed to stop a certain Siddal try but they could not hold out forever and back to back penalties saw them yet again defending repeat sets and this time Lewis Hirst made no mistake as Siddal levelled the scores at 20-20 with twenty five minutes left on the clock.

Despite surrendering the lead for the second time the Outlaws always looked like scoring if they could only have some possession and when they at last got the ball in their opponents half they did just that as Jon Christie celebrated his return with virtually an identical try to the one scored by Mike Hyatt, driving straight to the line and getting the ball down despite some heavy traffic. Blake Turner crucially converted and at 26-20 the Outlaws were back in the lead for the third time.

It was a lead they were destined to keep for the remainder of the match!

As the game entered the closing stages it was all Siddal as they threw the proverbial kitchen sink at the Outlaws. They were helped by some poor handling by the home team and a string of penalties saw the remainder of the match played out in and around the Outlaws forty.

Under such pressure the Outlaws could not hold out forever and with seven minutes remaining Pete Howard went over in the corner for the visitors but the kick went wide and the Outlaws were still in front at 26-24.

The closing stages were continued to be played almost exclusively in the Outlaws  red zone but frantic defence somehow kept the home line intact and despite some late scares the Outlaws held on for a deserved win.

After the game their tired but relieved coach George Strachan was quick to register his satisfaction with proceedings commenting ” Everyone worked hard and that’s a given for an Outlaws team but hopefully we can start cutting out the early errors so we don’t have to work quite as hard as we did today! The injury to Muggo meant we had to change things positionally with Judo taking over at halfback. I think that allowed us to simplify things a bit with me prodding the team round from hooker. Man of the match today was Oliver Dale who was outstanding. Matt Horner, Jon Christie and Mike Hyatt especially caused them problems and got the whole team going forward. I was also really impressed with Kyle Widnall who probably had his best game in an Outlaw shirt.

Next weekend the Outlaws go back on their travels and with it the chance to avenge last weeks home defeat at Queensbury.