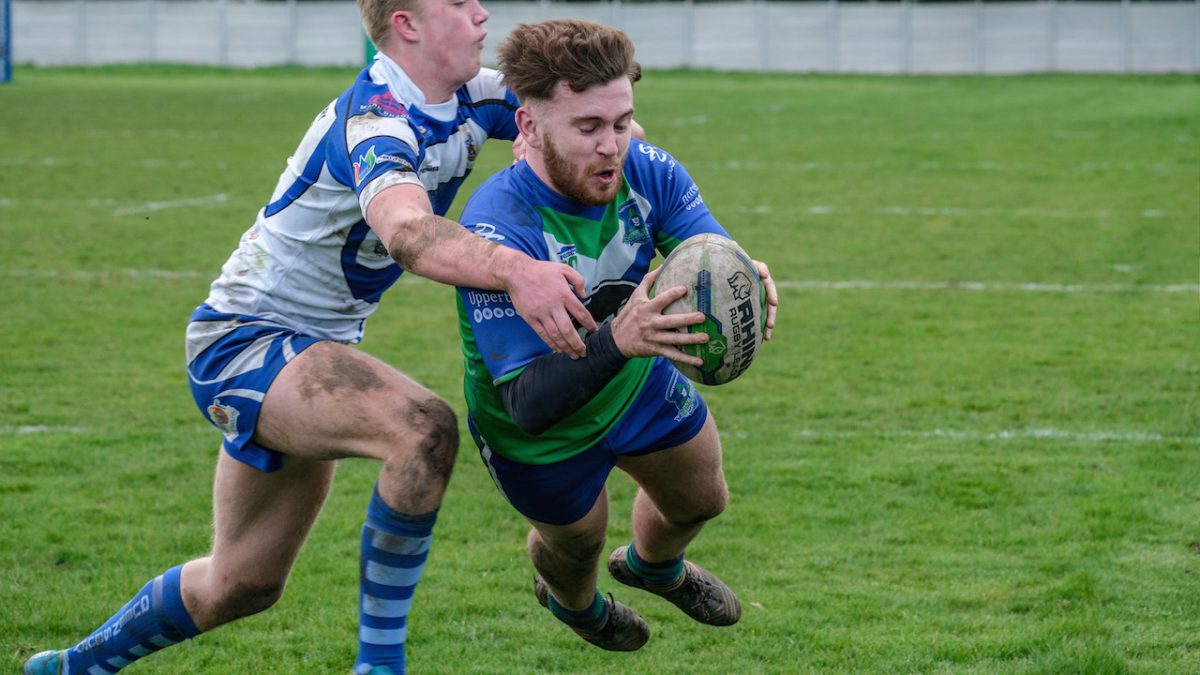 Nottingham Outlaws gave a hugely improved performance on last weeks Forty20 Cup outing, when they comprehensively outplayed fellow Premier Division rivals Queensbury at Lenton Lane on Saturday. Despite a much changed squad the Outlaws team added another win to last week’s victory over Goole, powering to an 18-6 victory and putting themselves in the driving seat to reach the knock-out stages of the pre-season cup competition.

The Outlaws took to the field with a much changed team to the one that stuttered to a 10-8 victory last weekend. However. the crucial playmaking spine of the side remained intact with Cunliffe, at  fullback, Whittle and Squires in the halves, Strachan at hooker and Charlie Clarke at loose forward giving continuity to the side despite having to contend with a whole new threequarter line up!

The Outlaws started the game with the wind in their favour and they immediately began to play with a much faster tempo than was apparent in last weeks sluggish opening against Goole. Indeed most of the opening play was in and around the Queensbury forty as the Outlaws defence quickly got on top whilst the front six used their pace and footwork to punch holes in the Queensbury defensive line. Indeed they were twice held up over the line but on both occasions they just could not get the ball down.

Despite the early dominance the Outlaws had failed to open their account and it looked like much of their early good play would go unrewarded. However with midway stage of the half approaching player-coach George Strachan went on irresistible surge from acting half, cutting through the Queensbury defence before unloading the the fleet-footed Cunliffe in support and the Outlaws full back duly sped over to open the outlaws account. Clarke Squires added the extras from bang in front as the Outlaws went into a 6-0 lead.

Stung by this reversal the visitors began to up the ante on attack, offloading the ball in the tackle and in doing so they began to ask more and more questions of the Outlaws defence. Indeed they had no fewer than four back to back sets in the Outlaws red zone but some great scrambling defence managed to keep them out when a try looked imminent!

Having weathered the storm the Outlaws finally broke the siege when Clarke and Whittle made excellent yards down the middle before the ball went wide down the left channel. Great hands by Toby Cornish saw the utility player set Harry Binnion clear and the young winger went over in the corner to stretch the Outlaws lead to 10-0 which became 12-0 with a fantastic touchline conversion by Blake Turner.

The Binnion try turned out to be the last major play of the half and the Outlaws went into the half time break buoyed by their half time lead but knowing they would be playing into a stiff breeze in the second stanza.

Both coaches used the interlude as a chance to make changes to their starting thirteen. The Outlaws coaching staff didn’t waste the opportunity bringing all four players off the bench to freshen things up on attack. The changes in the Outlaws line-up made an immediate impact with an notable increase in tempo from the Outlaws, with Connor Foulkes leading the way. Straight from the re-start he long-striding second rower began to cause all sorts of panic in the visiting defence with some excellent carries into the Queensbury line.

With the Outlaws dominating field position they looked odds-on to increase their lead and Harry Binnion looked like he might have grabbed his second but the ball squirmed free in the act of scoring and the referee chalked off what looked like a decent touchdown, despite some strong protests from the enthusiastic winger!

After twenty minutes of scoreless action neither side could get the clean break needed to trouble the scoreboard but finally a try came and it went to the Outlaws. Indeed it was a carbon copy of the first try with Strachan once again surging from acting half, breaking clear before offloading to the supporting Cunliffe who swooped in for his second and in doing so pushed the Outlaws out to a three score lead at 18-0

As the game went into the final minutes Queensbury finally got on the board when Aaron Moore went over after a rampaging run, Greenwood converted to set up a few nervous minutes in the closing stages but in reality it was too late for the visitors to claw their way back into the game as the Outlaws deservedly held on to record a well-earned 18-6 victory

After the game coach Strachan expressed his satisfaction with proceedings commenting “I am very happy with where we are after these first two games. Today was another step up in developing how we can play. We were disappointed with our ball control last week and we made improvements in that regard, in the first half we had only a few errors and that obviously had an effect on Queensbury’s energy levels as the game went on. Standouts for me were Charlie Clarke at thirteen who can really make that position his own whilst my man of the match was my assistant coach Adam Cunliffe. He’s back to fullback this year and his support play and reading of a game makes a massive difference to our ability to turn chances into points.  In many ways that was the difference between the two teams”

Next week the Outlaws travel to Dewsbury Moor to finish of their Forty20 group stage fixtures knowing that a win will see them progress into the quarter final draw and give their looming league campaign a much needed boost ahead of the first fixture in April.