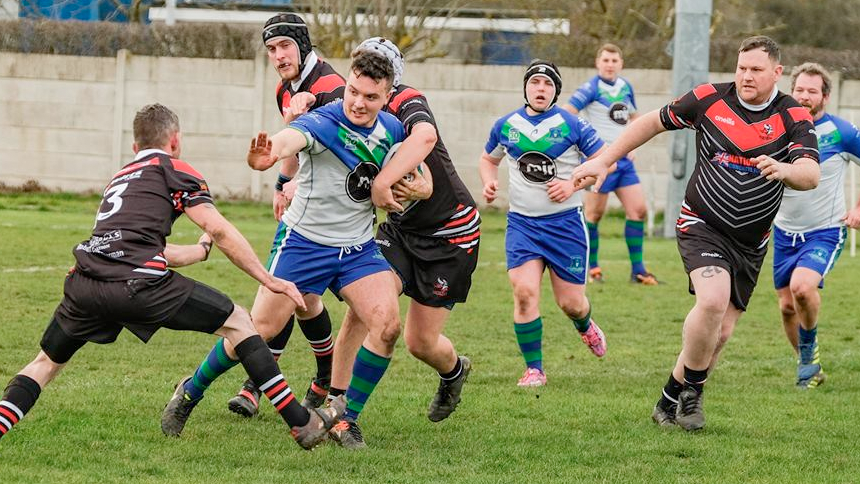 Nottingham Outlaws launched their 2019 campaign with a hard earned 10-8 victory over Goole Vikings in their opening Forty20 Cup fixture. There was never more than one score between the two sides with both teams enjoying periods of dominance but it was the Outlaws who held on for a narrow victory thanks to a single conversion.

The Outlaws took to the field with a much changed team that included four players on debut so it was to no ones surprise that they looked somewhat disjointed in their first hit out in almost six months. Indeed after fifteen minutes of scrappy opening play neither side appeared capable of completing their sets  as the ball went to ground with alarming regularity, due mainly to some poorly directed passing.

It was from one of these dropped passes that the Outlaws found themselves on the defensive and they were duly punished as the visitors finally opened their account. Deciding to run it on the last good hands saw Luke Nicholls touch down in the corner to nudge the Vikings into a 4-0 lead.

Stung by this reversal the Outlaws upped the pace and within ten minutes they drew level as skipper Oliver Dale latched onto the ball at pace and powered through a gap to level the scores at 4-4.

Having got on the scoreboard the Outlaws began to dominate possession and with more and more of the game being played in the Vikings forty there were plenty of opportunities for the Outlaws to add to their score. However they squandered a number of good opportunities with a combination of poor passing and poor options on attack.

Both sides made a number of changes at halftime in an attempt to freshen up their attacks but the second stanza carried on in pretty much the same way as the first as neither side could engineer an opening with defences well and truly on top.

After thirty minutes of second half stalemate the Outlaws launched yet another attack but as a loose pass went to ground James Donahue swooped on the lost ball and the Vikings centre swept up the pitch to score under the sticks to reduce the Outlaws lead to 10-8. Crucially the conversion was missed and this was to be the deciding factor in the game.

As the clock ticked down the Outlaws found themselves under concerted pressure from the eager Vikings but good defence kept them at bay as they finally held on for a win by the narrowest of margins.

After the opening match the Outlaws coaching staff clearly have plenty to work on before next weeks game at home to Queensbury. However there were also plenty of positives coming out of the game not least a good defensive stint that will hold them in good stead in coming weeks and the welcome return of Coryn Ward to the side. After more than a year out following knee surgery the pacey second rower picked up from where he left off in his last run out and will no doubt be an asset to the side in the coming weeks and months.