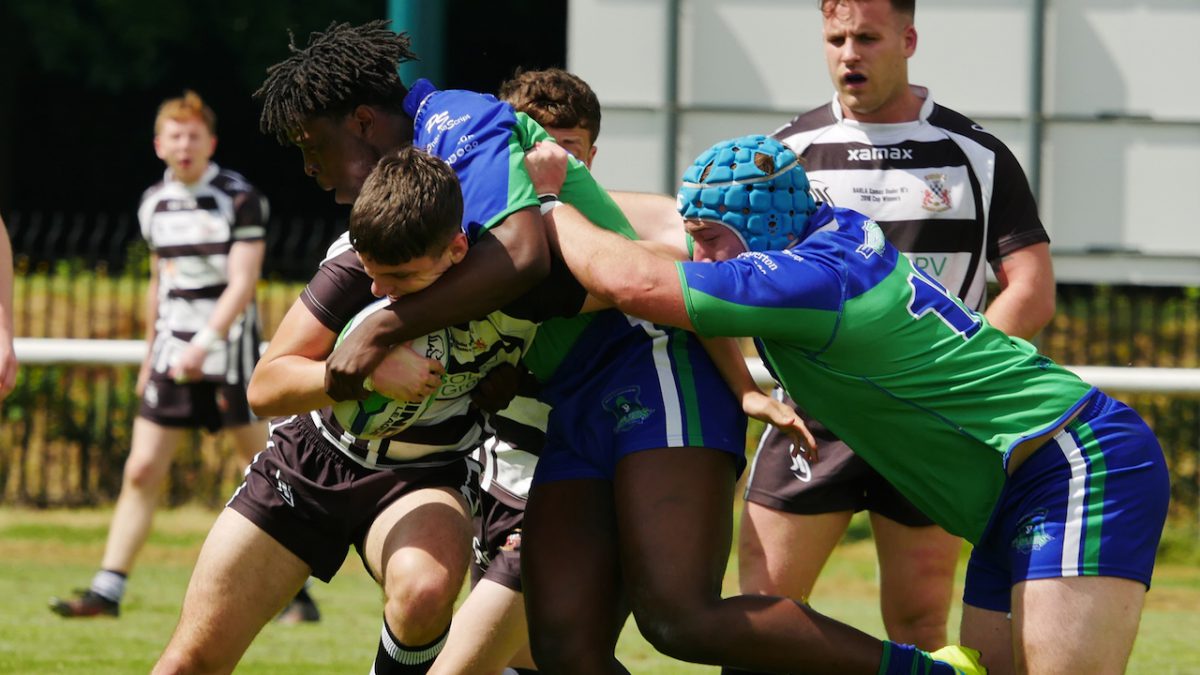 Nottingham Outlaws search for an elusive victory continues after they came out second best to second placed Siddal Academy at Highfields on Saturday. However they could and probably should have won the game but a lack of composure saw them surrender a 24-8 lead to eventually lose the game 28-32.

The Outlaws went into the game with six straight defeats under their belts so they were desperate for a reversal in fortunes. However they were helped by the return of a number of injured players with Joe Barton, Ali Waring, Chris Prime, Nathan Hill and Conor Foulkes all coming back into the side after missing the last game

The match started with the Outlaws playing into a strong breeze but they made light of the elements and in their first real attack they opened their account when Ciaran Dean dropped the ball off to Oliver Dale with an inside pass and the second rower jinked over to put the Outlaws 6-0 up with three minutes on the clock.

Composure from the re-start is something the Outlaws have lacked this season and they demonstrated this feature once again. They collected the ball from the kick off only to attempt a difficult pass on their twenty metre line. The ball went to ground and from the resultant scrum Siddal swept in at the corner with an Elliot Jewitt try that cut the lead to 6-4.

Despite the reversal the Outlaws continued to dominate the opening exchanges and they extended their lead on the tenth minute Ali Waring latched onto the end of another inside ball and he powered over for a try. Dean added the extras and at 12-4 the Outlaws appeared in control of the game.

The visitors currently sit in second place in the league and they showed their class on the twenty minute mark. There seemed little danger when the tackle count reached five on the edge of their forty metre zone but with the Outlaws defence waiting for the kick they ran the ball and Finley Hickey dived in at the corner to cut the Outlaws lead to 12-8.

Stung by this reversal the Outlaws hit back with a great chase and ball steal by Nathan Hill setting the Outlaws up for an attack and chip over the top by Cunliffe was picked up by Chris Prime who unloaded for Andy Musvaburi to score close to the sticks. Dean slotted over to make it 18-8.

Six minutes later the Outlaws were in again when Strachan offloaded in the tackle and Oliver Dale scampered over for his second of the match and with it he sealed the bubbly for the man of the match award!

Dean converted to make it four out of four for the sharpshooter and at 24-8 the Outlaws appeared to be well on the road to victory.

With the clock ticking down the Outlaws fell to another long range try on the last tackle in what was to turn out to be a crucial score.

Once again their appeared little danger with the visitors deep in their own half but the Outlaws defence was slow to move across as the ball zipped through the visitors hands and Elliot Jewitt bagged his second of the game to reduce the Outlaws lead to 24-14.

Despite the setback the Outlaws appeared well in control and with Barton and Foulkes coming off the bench the coaching staff refreshed the forwards ready for a repeat performance in the second half.

After the late try at the end of the first half a good start to the second stanza was vital if the Outlaws were to take the spoils. However they suffered the exact office!

Buoyed by the late score the Siddal attack began to make inroads into the home defence from the restart and the Outlaws  lack of confidence under pressure began to show.

The Outlaws lead soon began to melt away and with the second half only six minutes old Connor McCallum went in for a converted try to make it 24-20 and five minutes later they grabbed another long range effort as Dom Patrice opened his account. Dow converted to put Siddal ahead for the first time in the game at 24-26.

The opening third quarter could only be described as miserable from an Outlaws perspective as they lost control of the game and with it the chance of ending their painful losing streak.

A combination of poor defence and soft penalties saw them pinned in their own half, unable to make any headway against a Siddal attack that moved the ball with confidence and speed. Indeed, the Outlaws had hardly been in the Siddal half with twenty second half minutes played.

With a monopoly on possession and field position it came as no surprise when Siddal scored again. Yet another silly penalty gifted the visitors back to back sets and Henry Turner scored his first of the game.

At 32-24 the Outlaws had leaked twenty four points in twenty five minutes of play without reply.

Despite the game slipping away the Outlaws managed a final rally, a well-weighted kick by Calland saw Cunliffe pounce to reduce the deficit to 28-32 with five minutes to play.

Indeed a late break by Nathan Hill saw the centre break clear only to be hauled down with thirty metres to go but on the next play the ball was spilled and with it went the chance for victory as the referee drew proceedings to a close.

The Outlaws now have a touch looking run of fixtures, starting with a trip to table-topping Batley Boys on Saturday as the search for that elusive win continues!