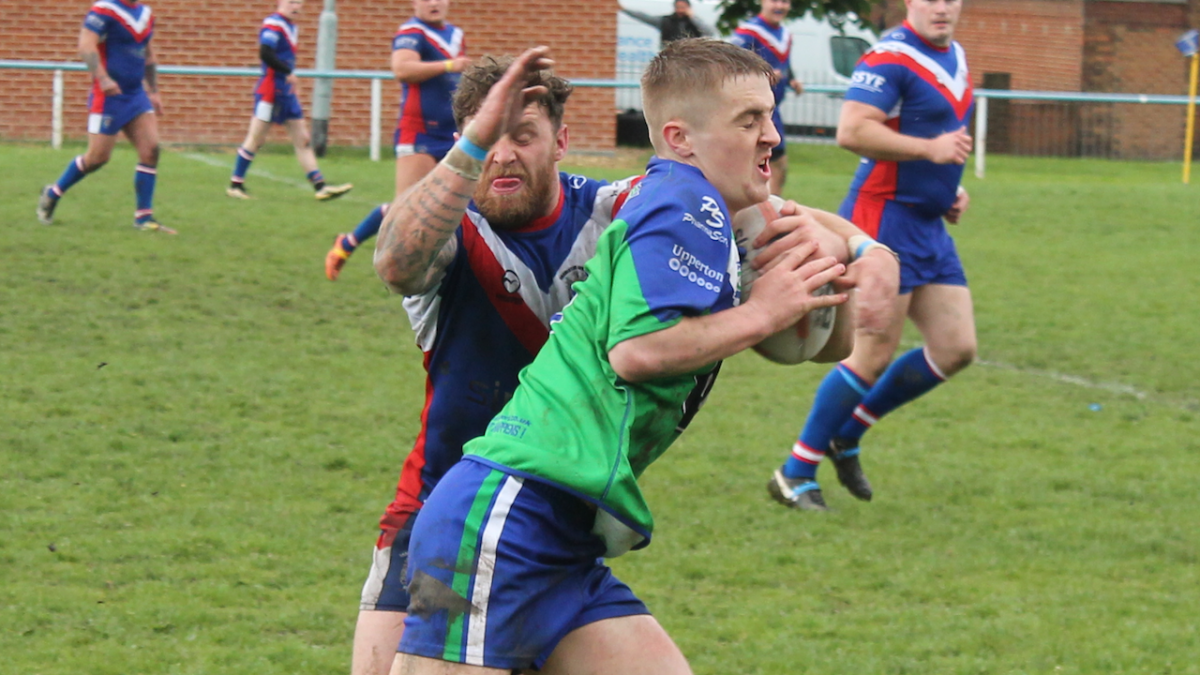 Nottingham Outlaws faced yet another match on the road on Saturday, another tough assignment against one of the most famous names in Rugby League, Sharlston Rovers.  Once again a much changed team was up against a physically larger home outfit but they stuck to their task bravely, twice leading before finally falling to a 26-10 defeat against their illustrious opponents.

The Outlaws went into the game with a slew of changes to the side that lost heavily at Queensbury last time out. The changes included no fewer than four players on debut and yet another half back pairing as this time it was Adam Cunliffe who paired up with Alex Whittle in the all-important play-making roles whilst Ciaran Dean slotted into the vacant full back role.

Other changes saw Strachan and Dale return to the pack whilst Matt Ross came into the front row for his debut . Other players on debut included a string of former Outlaw juniors drafted in with youngsters Harry Walton, Chris Rudkin and Patrick Mulready all pulling on an Outlaws shirt for the first time.

The Outlaws kicked off the game by playing up the slope and instantly they posted their intention to improve on last weeks performance with an excellent opening defensive set of six that restricted the big Sharlston side to less than forty metres gained and more importantly galvanised the pack.

Having got the good start that they wanted the Outlaws then went one better,  taking an early lead which was just reward for their early dominance. The Outlaws try came off the back of a repeat set forced by excellent Outlaws defence and good hands on the last tackle saw Ciaran Dean ghost through a tackle before putting Jimmy Goodwin in for the opening score under the sticks. Dean added the extras and at 6-0 the Outlaws were deservedly ahead after seven minutes of play.

Indeed things almost got better for the Outlaws three minutes later when Chris Prime looked like he was over from short range but was adjudged to be held up in a 50:50 call!

Having done so well the Outlaws then blotted their copy book by giving away back to back penalties in quick succession and on the back of this Sharlston capitalised with a converted score that brought the two teams level at 6-6 after 15 minutes of play.

It was vital that the Outlaws didn’t leak further points on the restart as they had done at Queensbury last week. They managed to avoid doing that, in fact they went one better and scored themselves!

The Outlaws try came straight from the kick off, the home full back allowing the ball to bounce before recovering it only to be met by a wall of eager Outlaws defenders that drove him back over the home line. In the confusion the ball came free and Chris Prime was on hand to dive on the loose ball for the simplest of tries that restored the Outlaws lead at 10-6.

Having done so well in the opening half hour the Outlaws appeared set to take something from the game. However a disastrous five minute spell just before the interval saw the game effectively slip from their grasp.

The problems started when Matt Ross left the field with a shoulder injury and things then went from bad to worse as the home side scored two quick-fire tries to open up a two score lead.

The first of these came off the back of a lost ball in the tackle and the second came off yet another silly penalty. The Outlaws were subsequently made to pay for their profligacy as the home team moved the ball at pace and twice exposed the Outlaws defensive frailties out wide, something of a recurring problem in recent weeks.

The half time whistle could not come soon enough for the Outlaws who had twice led during a much improved first half performance but now found themselves 18-10 down against a resurgent home team.

The half time options were somewhat limited for the coaching staff who found themselves hindered by the mounting injury toll but they threw caution to the wind as Walton, Mulready and Rudkin all came on in an attempt to add some fresh legs to an Outlaws side that was starting to creak towards the end of the first stanza.

The second half started in miserable conditions, with the rain now lashing down. Indeed a greasy ball coupled to the postage-stamp sized pitch meant that the game developed into something of an arm wrestle as neither side could find a way through some determined defence.

Indeed the Outlaws more than held their own for much of the opening exchanges, twice successfully defending back to back sets after getting trapped in goal before mounting a series of raids of their own that threatened the home lead. However they lacked the killer punch needed to add to their lead and after half a dozen forays into the Rovers red zone they came up empty handed and the chance to get back into the game had gone.

After twenty six minutes of second half play the score board had not moved but the Outlaws were finding themselves more and more under the cash. They were not helped by yet more injuries that left them without any substitutes, forcing front rowers like Wil Ephraim to play the full eighty when normally he would have had a couple of breathers!

As the game entered the closing stages the home side made their physical dominance count, adding two further tries as the Outlaws started to tire and the home lead eventually stretched out to 26-10 before the referee finally drew proceedings to a close.

Despite the defeat the Outlaws had given a much improved performance compared to the previous weeks horror show at Queensbury. Indeed, having been without a home match for over a month the Outlaws now have a run of home games in which they will look to get some much needed league points under their belts. The first of these is against Beverley at Highfields next Saturday when a home win is something of a must!