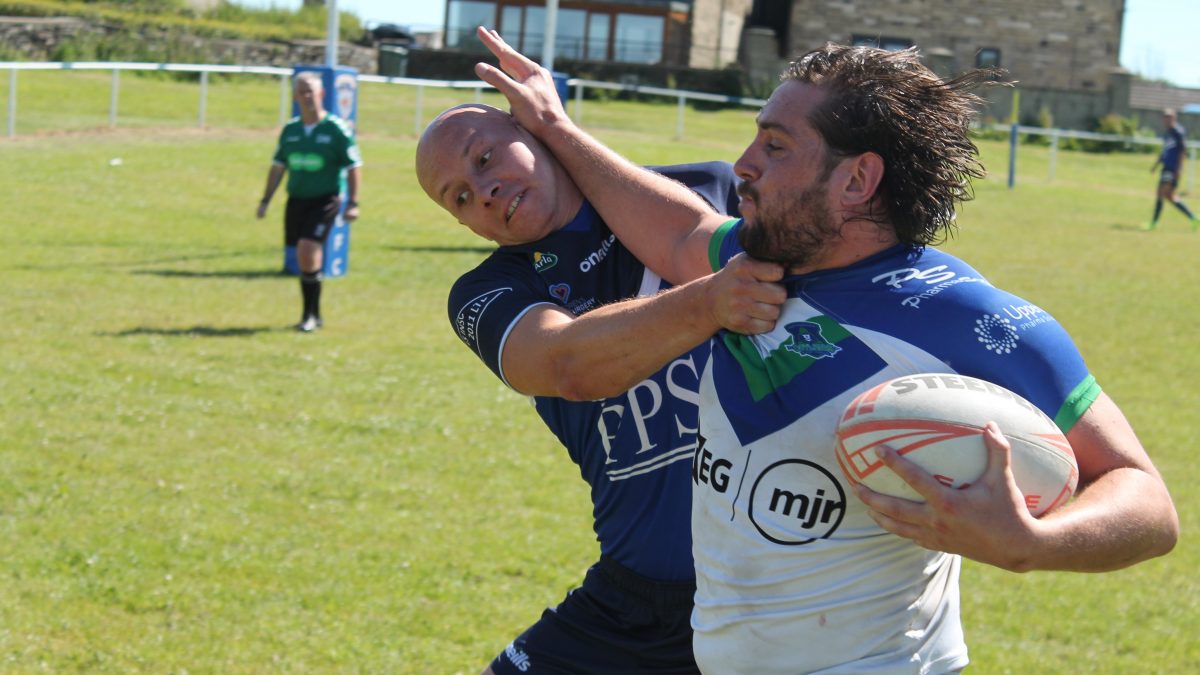 Nottingham Outlaws travelled up to Queensbury on Saturday hoping to achieve another double victory over a side they beat convincingly back in April. However, despite a battling performance, they could never recover from a poor start to the game and ended up on the wrong end of a 40-14 scoreline.
The Outlaws went into the game with no less than eight changes to the team that won last time out at East Hull two weeks ago. There was a new look halfback pairing with Joe Moran teaming up with Haz Ashby  whilst there was a complete new bench including Liam Heaney, James Gisborn, Stew Readhead and Dave Ivemey.
The match kicked off with the Outlaws playing up the steep sloping pitch and straight away it was clear that they were going to have their hands full holding out a big, mobile Queensbury side who moved the ball around at pace.
The Outlaws looked to have weathered the early Queensbury storm having held out for three attacking sets from the home sides in the opening six minutes but there was no denying a rampant home side who continued to attack down the slope at all angles, scoring two quick trys in the opening quarter to lead 12-0.
The Outlaws were on the ropes at this point but they dusted themselves down and managed to exert some pressure on the home line and were rewarded for their efforts on the twenty minute mark when hard working hooker George Strachan powered over from short range to score a fine solo effort and bring the Outlaws back into contention at 12-4.
Stung by this reversal the home side hit back and scored two quick trys and at 24-4 the game looked like it was all over when in the dying minutes of the half Queensbury crossed the whitewash again only to be held up by a magnificent one-on-one tackle by James Hood who saved a certain score that would have seen the game dead and buried.
All eyes were on the slope at half time with plenty of tactical talk on how the incline might be used to their advantage and straight from the er-start the effect was all too apparent as the Outlaws began charging at pace deep into the Queensbury redzone on virtually every drive.
The first Outlaws try of the half came within five minutes of the resumption when Alessio Cauteruccio broke through the home defence on a twenty metre burst before unloading to Adam Cunliffe in support who scampered over for a score that brought it back to 24-10 with James Hood adding the extras.
On the back of multiple repeat sets in the home sides favour the Outlaws found themselves back on the defensive and Queensbury restored the deficit on the sixty minute mark to make it 30-10.
Despite the reversal the Outlaws hit back, good interchange play amongst the forwards saw the Outlaws get close to the line and a sharp pass from Strachan out of acting half went into the hands of Captain Coryn Ward who darted over for a well taken and much deserved score.to peg the lead back to 30-14.
As the game entered the final stages both sides began to feel the heat on what was a very warm day, with the pace dropping noticeably. Once again the Outlaws found themselves on the end of some tough refereeing calls and two quick scores in the last five minutes saw the home side stretch their lead out to 40-14, a scoreline that in no way reflected the difference between the two teams on the day.
When the match ended the Outlaws team remained in good spirits with several players in the frame for the man of the match award. Try scorers Coryn Ward Adam Cunliffe and George Strachan were all in with a shout whilst Haz Ashby had another top notch showing with a great 80 minutes on defence. However the bubbly deservedly went to James Hood for a strong performance, especially with ball in hand.
All eyes are on Lenton Lane next weekend when championship contenders Westgate are the visitors, a team that beat the Outlaws by a record margin when the two sides last met!