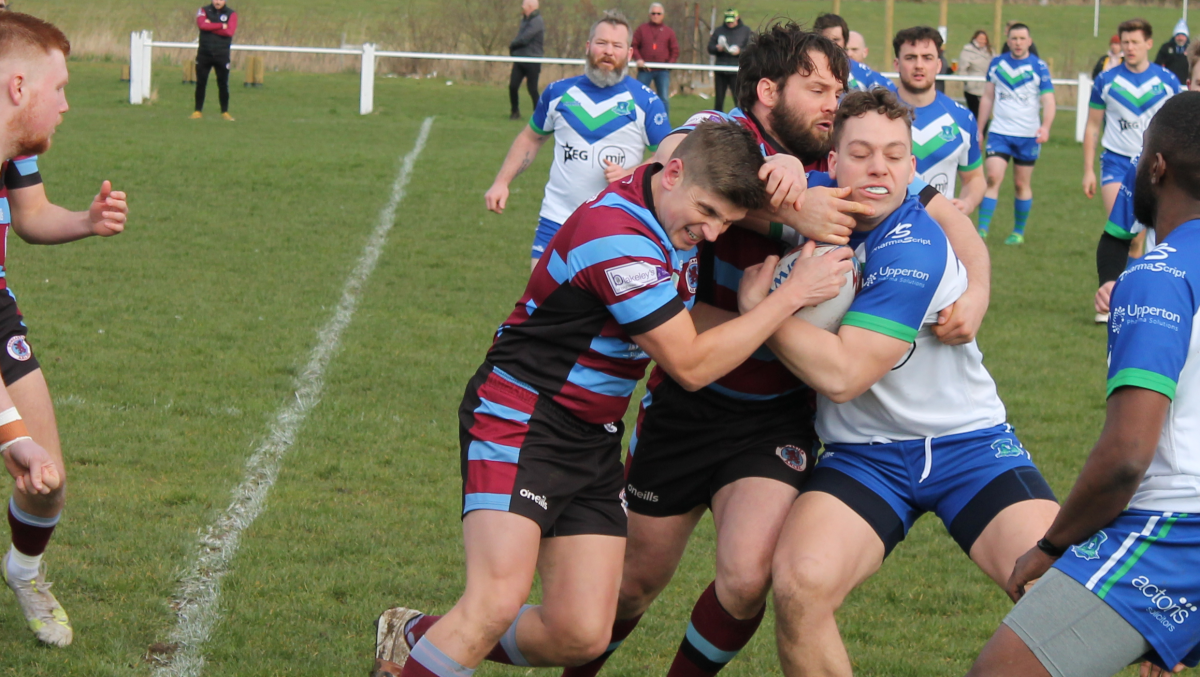 Nottingham Outlaws opened their 2022 Yorkshire Premier League campaign on Saturday with a tough opener at Toll Bar in Doncaster. In cold, windy conditions more akin to winter than summer rugby, a rusty looking Outlaws team succumbed to a 42-10 defeat against the newly-promoted outfit.

The Outlaws went into their first match of the campaign with a few new faces in the ranks including NTU scholarship player Ben Littlewood on debut at stand-off pairing up with Joe Moran in a new look half back combination. In the pack Freddie Fearnley came into the front row with Alessio Cauteruccio coming back into the squad on the bench for his first team debut.

The match kicked off with the Outlaws playing up the slope into a stiff breeze but despite the elements being against them they started brightly, peppering the home line with a series of attacks but it was clear from the get-go that the Outlaws lack of match practice meant they couldn’t find the cutting edge needed to open up a well drilled home defence.

Despite the good start the Outlaws came away from the home line tryless and they were made to pay on the ten minute mark when a soft penalty gifted the home side possession in the Outlaws red zone and Zac Braham powered over in the left hand corner for the home team. Things then went from bad to worse when Toll Bar showed good hands to sweep the ball from left to right, scoring in the opposite corner to double the home lead to 8-0.

Despite the double whammy the Outlaws regathered their composure and piled on the pressure with several sets in the home team red zone. George Strachan came closest to opening the Outlaws account, barging over from short range only to be held up in goal but yet again a good period of Outlaws attacks passed by without reward.

Having failed to capitalise on their best period of the half the Outlaws soon found themselves struggling to get to grips with a fast-moving Toll Bar team that will no doubt prove to be a force in the Premier league. And their task became even harder on the thirty minute mark when captain Coryn Ward had to leave the field with a knee problem.

With their captain off the pitch the Outlaws found themselves under the cosh again and another two quick-fire trys by the home team, led by powerful forward Zac Braham, saw Toll bar pull away to a 20-0 lead and it looked like the game was well and truly slipping away form the Outlaws.

The Outlaws desperately needed some inspiration from somewhere and they found it in the shape of hooker George Strachan. The old war horse had already put in a monumental tackling effort in the opening thirty five minutes but he showed he could score trys as well as save them. Once again he powered over from short range but this time he managed to ground the ball for a well deserved try that reduced the deficit to 20-4 as the first stanza came to a close, providing a glimmer of hope for the travelling Outlaws faithful.

Coaches Shepherd and Cunliffe used the halftime break to breathe new life into the pack bringing on Sam Andrews and Harry Masini to freshen up the front six.

The second stanza found the Outlaws playing with the elements in their favour and it was immediately clear what an advantage it provided when they made plenty of metres off the opening sets. However despite the bright opening their lack of cutting edge meant they could not get over the white wash despite being in and around the home forty metre zone for the opening 15 minutes of the second half.

As with the first half, their failure to capitalise on good field position was soon punished by a fast-moving Toll Bar team that once again cut loose with three quick-fire trys in a devastating eight minute spell that saw the home team power away to an unassailable 32-4 lead with twenty minutes still to play.

Despite the reversals the Outlaws did not throw in the towel and they battled back bravely and were eventually rewarded for their efforts when a loose ball went to ground and was hacked forwards before James Amachree won the foot race to the ball, collecting superbly over the line to reduce the deficit to 32-10.

The remainder of the half saw the Outlaws well and truly on the back foot, having to put in yet another huge tackling stint. They did so bravely but they couldn’t avoid leaking two more trys to give a final score of 42-10 in favour of an impressive home side.

Despite the defeat there were plenty of good performances from the new players in the ranks that offer encouragement for the future. Indeed there were a few candidates for the man of the match bubbly. Alex Whittle and Freddie Fearnley came close to getting the glory but it was club stalwart George Strachan that deservedly took the award for a great tackling stint and a well taken try to cap off a great afternoons work for the hard working number nine.

Next Saturday the Outlaws begin their home campaign with a match up against New Earswick at Lenton Lane; a game in which the Outlaws will be keen to get off the mark!