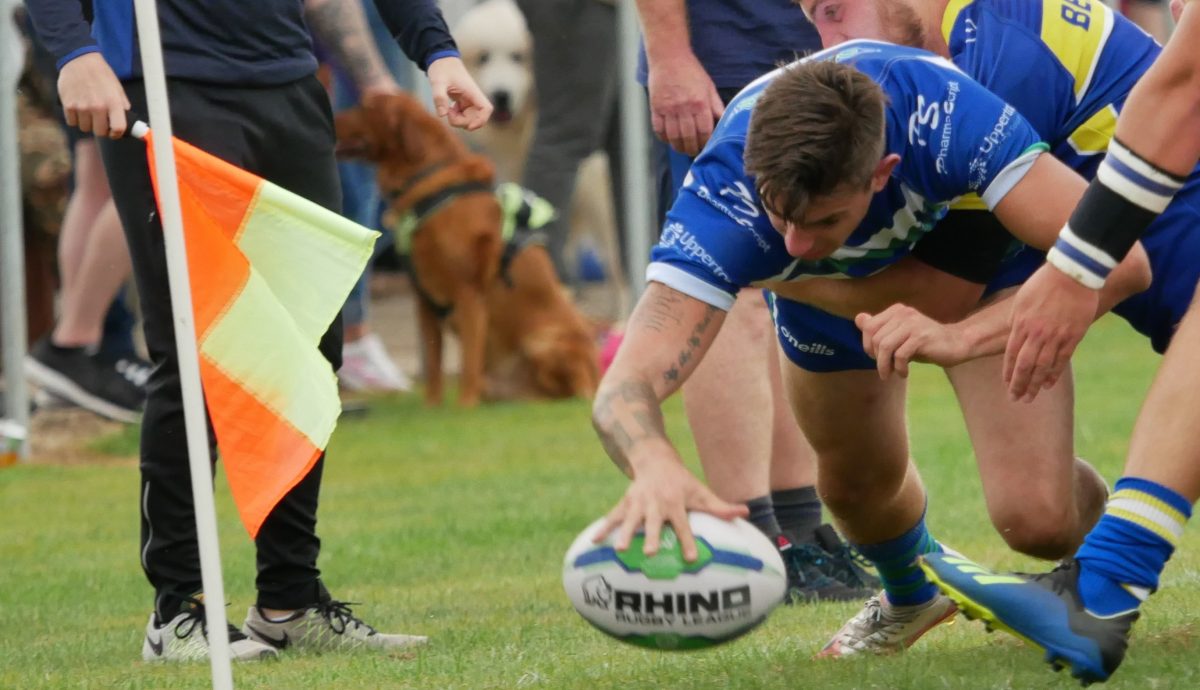 Nottingham Outlaws entertained title-chasing Bentley at Lenton Lane on Saturday looking to build on last week’s victory over East Hull and avenge an earlier heavy defeat at the hands of their Doncaster rivals. However, despite battling bravely and matching their illustrious opponents for long phases of the game they  finally succumbed to a 30-14 defeat in a match that was much closer than the final scoreline indicated
The Outlaws went into the game with six changes to the squad that ended their long losing streak last weekend. Once again there were changes in the spine of the etam with Roddy Jonas coming in at fullback, Cunliffe stayed at seven but Brandon Whitaker came in at stand off to partner him in the halfs with Alex Whittle coming in at number nine.
The rest of the pack was the same as last week although there were extra forward options drafted onto the bench with Stew Readhead and Abe Sua providing some additional firepower in the interchanges.
Unlike in recent weeks, the Outlaws started the match strongly and pressured the Bentley try line in the opening exchanges thanks to a number of penalties. After several sets in the visitor’s red zone numerous chances had gone begging before Coryn Ward latched onto a flat pass from Alex Whittle and the pacey second rower scorched over to put the Outlaws in front 6-0 with the Cunliffe conversion.
Stung by this reversal the visitors hit back and put the Outlaws under constant pressure, helped by back to back penalties, and for the midway stages of the half it was the Outlaws who were on the back foot. To their credit however the defence, which has been a cause for concern for most of this season, held up well. Indeed it looked like they were about to weather the storm but they were finally caught out by a crossfield kick as Bentley levelled at 6-6.
As the match headed towards the interval it looked like both sides might go into the break on level terms. However two quick try’s in the last five minute saw Bentley edge out to a 14-6 lead despite the two teams being pretty evenly matched for most of the half.
During the half time break the coaches tried to breathe new life into the Outlaws pack with Abe Sua, Rory McQueen and Stew Readhead coming onto the park whilst Liam Heaney slotted into acting half.
The Outlaws went looking for the early score at the start of the second stanza, led by some great forward drives by Abe Sua and James Hood and with halfback Brandon Whittaker growing in confidence it seemed likely that the Outlaws would get the next score.
However despite the early pressure the Outlaws couldn’t get the early score and all of the good work was quickly undone as a series of silly penalties and dropped ball early in the tackle count by the Outlaws saw momentum switch back to the visitors. This resulted in the Outlaws having to defend several back  back sets in their red zone and on the back of this the visitors extended their lead to 6-20.
Despite the growing gap the Outlaws refused to throw in the towel and  after some good pressure they swung the ball out wide to winger Kenny Wilson who dived over in the corner for a great try despite the attention of a number of Bentley defenders to reduce the deficit to 10-20. With the deficit narrowing and with twenty minutes still to play the Outlaws were still very much in with a shout of getting something out of the game!
From the kick off the Outlaws tried to launch more attacks but some strong defence from the visitors saw the Outlaws struggle to get out of their own forty Despite their best efforts the home side could not make any headway against a Batley front six that was growing in confidence and with a stranglehold on field position the Outlaws could not gain momentum against their physically larger counterparts.
With  the Outlaws now on the back foot Bentley added two quick fire trys to stretch their lead to 30-10, a twenty point deficit that in no way reflected how closely matches these teams had been so when Ronan Treble grabbed a fine try in the closing stages it was no more than the Outlaws deserved as they reduced the final margin to 14-30 as the final whistle went soon afterwards.
After the game the players waited for the match sponsors Hot Pod Yoga to choose their man of the match. There were certainly a few players in the mix with Coryn Ward, Adam Cunliffe and Brandon Whitaker all showing up well but for the second week in a row it was powerhouse prop forward James Hood that took the bubbly for yet another great performance in the engine room of the front row.
Saturday’s game marked the end of the Outlaws 2021 home campaign. They now have the luxury of a week off before travelling up to East Hull for their final game of the league campaign on the 4th September.
Photo courtesy of John Hendley