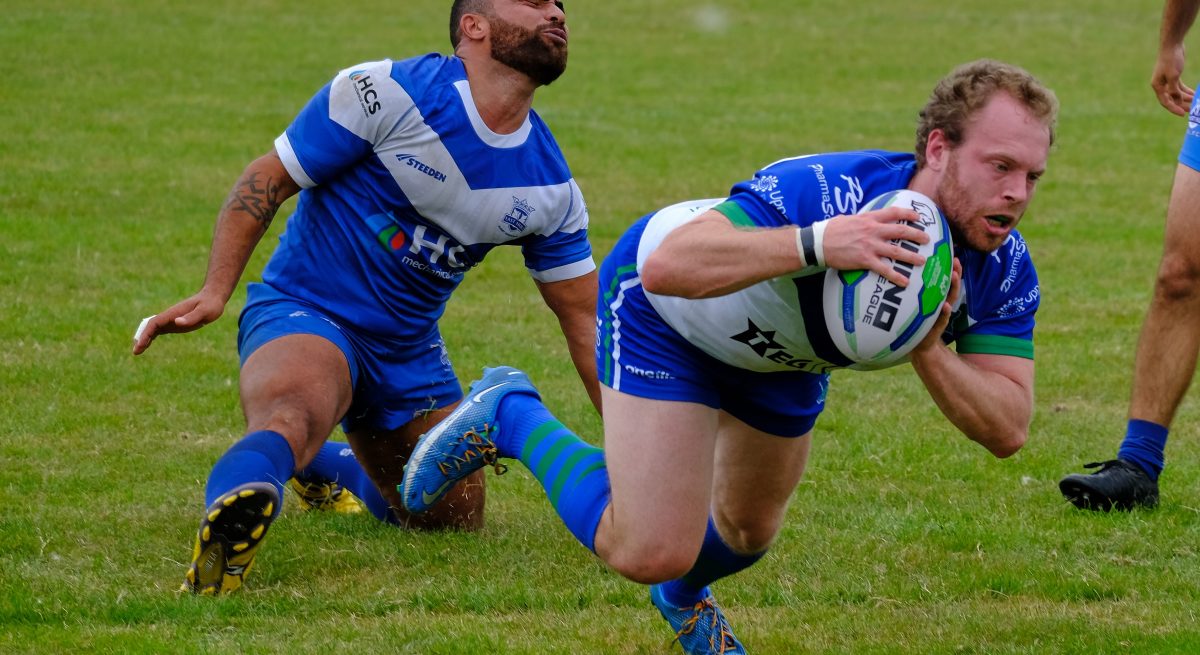 Nottingham Outlaws entertained East Hull at Lenton Lane on Saturday desperate to bring an end to a 9 match losing streak that stretched back to early May. In a fast moving, highly entertaining game the Outlaws finally broke their hoodoo with a well earned 42-20 victory, their first ever win against the East Yorkshire side..

Once again the coaching staff had to make a number of changes to the side that ran out against Queensbury seven days ago. Charlie Clarke and Luke Wadding paired up in the centres for the first time this season and there was a new halfback pairing with Sam Dennison and Player coach Adam Cunliffe teaming up as the key playmakers.

Despite the changes in the backs the pack had a fairly familiar look about it with the same starting six as last week although there were changes on the bench with Rory McQueen having his first run out of the campaign and Liam Heaney joining him in the replacements.

It was a case of deja vu all over again for the watching Outlaws fans as their favourites made their usual poor start to the game, gifting the visitors two soft penalties to piggyback them down into the Outlaws red zone and from their first attack they opened up a 4-0 lead after five minutes following some poor defensive work out wide.

Stung by this reversal the Outlaws piled on the pressure and Adan Cunliffe looked like he had scored only to be held up over the line but then on the fifteen minute mark George Strachan powered over from short range to level and when Gaz Whitfield added the extras the Outlaws nudged into the lead at 6-4.

It was a lead they were destined to keep for the rest of the game!

Buoyed by the Strachan try the Outlaws hit the accelerator and they launched a series of stunning raids that had the visitors reeling and on the back of one of these Coryn Ward ;latched onto a superb flat pass to burst through a gap and then show a fine turn of pace to round the fullback before planting the ball down under the sticks for a superb solo effort as the Outlaws extended their lead to 12-4.

After weeks of being under the cosh the Outlaws were finally playing with confidence and further raids yielded more points as Adam Cunliffe put in a superbly weighted chip which he collected himself to score his first of the game to stretch the home lead to 18-4.

Despite plenty of good field position and a strangle hold on possession the Outlaws could not add to their lead and just on the stroke of half time East Hull hit back with a try on the whistle to cut the Outlaws lead to 18-8 as the referee drew the first stanza to a close.

During the halftime break the coaching staff used took opportunity to bring on some fresh faces in the pack as Rory McQueen made a welcome return to the game and he was joined by JP Roberts, Joe Raine and Liam Heaney who all came into the side in an attempt to keep up the pressure on their tiring opponents

With the Outlaws two scores in front it was vital that they got first try after the break and they went straight on the hunt for it but as with recent weeks they could not turn pressure into points.

After spurning a string of chances the home fans feared the worst as East Hull hit back to launch a series of attacks of their own. However the Outlaws’ defence, working much better as a unit than they have in recent weeks, held out thanks to some good defence by James Hood and Ronan Treble in particular.

Having weathered the mini East Hull revival the Outlaws hit back and George Strachan once again powered over from short range with a carbon copy try to his first and more importantly a three score lead to the Outlaws at 24-8.

Any thoughts that the home faithful had of relaxing during the remainder of the game soon vanished when their favourites failed to gather the kick off and a further dropped ball saw them on the back foot and the visitors capitalise with a try that reduced the deficit to 24-14 and with twenty minutes to play the result was still very much in the balance!

Yet again the next score was critical and thankfully from a home fanse perspective it was the Outlaws who got it when Adam Cunliffe scorched through a hole in the visitors defence to to complete a fine brace and at 30-14 the Outlaws were finally beginning to put some daylight between themselves and an East Hull side that was clearly running out of gas.

The Outlaws were in no mood to take their foot of the gas and Cunliffe went from try scorer to try maker as he set Ronan Treble clear for a well earned score in the corner. Despite the difficult ange Gaz Whitfield stepped up in an attempt to keep up his hundred percent record and the young sharpshooter nailed the conversion from the touchline for a superb two pointer.

The Outlaws were not done yet however and George Strachan scored yet another short range effort, going over with three defenders in tow to complete a fine hat trick for the powerful number nine.

After the match there were a number of players in the mix for the man of the match award. Strachan Ward and Cunliffe were all in with a shout as was Gaz Whitfield with a superb afternoon with ball in hand and a perfect seven out of seven conversions. However there was only ever one winner as prop forward James Hood deservedly took the champagne after easily his best performance this season in the engine room of the front row.

Coach Adam Cunliffe was quick to praise his charges after finally ending their long lean spell commenting “it was a good win and one that we have building nicely for. I thought we were patient with the ball and made good decisions. It’s great that the lads have finally been rewarded for all of their hard work!”

Next week the Outlaws play their final home game of the season when they entertain second placed Bentley from Doncaster at Lenton Lane.