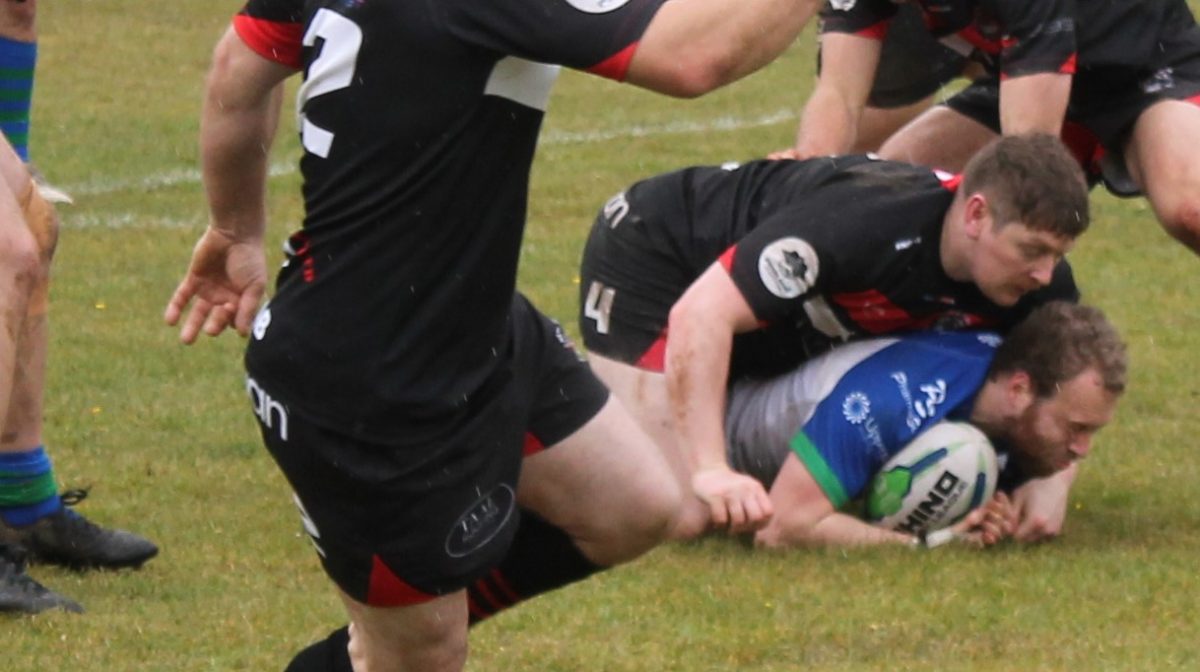 Rugby league returned to Lenton Lane on Saturday for the first time since August 2019 when Nottingham Outlaws entertained New Earswick All Blacks in their opening Yorkshire Premier Division fixture. Despite the wet and windy weather the Outlaws played some excellent attacking rugby, outscoring their dogged visitors to finish with a deserved 28-14 victory.

Head coach Adam Cunliffe had something of a selection conundrum going into the game having used over forty players in the two pre-season friendlies leading up to the match. After much thought the rookie coach went with a mixture of experience and new faces for his first competitive match in charge.

The changes included two players on debut, hooker Joe Moran on the bench with speedster James Amachree on the wing. Other changes included a new look centre partnership of Charlie Clarke and Coryn Ward to increase the attacking options once the forwards had done the hard work down the middle.

The match kicked off in a swirling wind and pouring rain and the difficult conditions seemed to affect the visitors the most. Twice in succession athe All Blacks dropped the ball putting the Outlaws on the front foot from the get-go and they soon capitalised when a free-flowing move from right to left saw Charlie Clarke scorch over with some good footwork to make it 4-0 to the Outlaws with less than five minutes played.

Despite the strong start the Outlaws could make little impression against a well drilled All Blacks defence that was now growing in confidence after a shaky start, putting plenty of men in the tackle and after twenty five minutes of play neither side had carved out a clear chance since the opening score.

With ten minutes of the half remaining the match suddenly sprung to life when a kick through by New Earswick rebounded back into the kickers arms who put winger Dean Smith away as the All Blacks levelled to make it 4-4 with minutes left to the half time hooter.

The visitors try seemed to provide something of a wake up call to the Outlaws who stormed back up the field. A huge run down the middle by prop Mike Stewart finally split open the New Earswick defence and Adam Cunliffe popped up on his shoulder to take the pass out of the tackle and put the Outlaws back in front within a minute of conceding. Gaz Whitfield added the extras from bang in front to make it 10-4 to the Outlaws after 40 minutes of absorbing rugby league football.

The half time break saw the coaching team looking to breathe new life into the team and Joe Moran and Abraham Sua came off the bench to freshen up an Outlaws pack that had worked hard playing into the elements during the first stanza.

The second half started with the Outlaws looking to utilise the stiff breeze that was in their favour but a couple of dropped balls saw them very much on the back foot in the early exchanges. Indeed it came as no surprise when the All Blacks scored after a period of consistent pressure.

Once again the damage was done off the back of a ricochet from the kick through, the deflected ball wrong footing the Outlaws defence and Ben Husband pounced to peg the Outlaws lead back to a slender 10-8 margin.

Things then went from bad to worse when experienced second rower Oliver Dale went down with a bad ankle injury, stopping the game for 15 minutes and when the match re-started the result seemed very much up in the air, with the All Blacks growing in confidence all the time and more and more of the play taking place in and around the Outlaws forty.

After sixty minutes of play Outlaws finally managed to break the siege, having struggled to get into their opponents half for much of the second period, forcing their way into the All Blacks red zone for the first time since the break.

Having set the platform they stretched their lead to two scores when a nicely weighted flat pass saw Charlie Clarke once again use his footwork to grab a much needed try for the Outlaws. Indeed the Clarke try made it a fine brace for the young centre to seal a man of the match performance!

Squires converted to make it 16-8 and two minutes later the Outlaws lead was extended further when George Strachan used his strength and experience at acting half to dummy and go from short range, powering through for a fine short-range effort.

At 22-8 with ten minutes to play the All Blacks were still technically in the game and when Ben Husband bagged his second of the game to male it 22-14 the game was once again in the balance!

Whilst there may have a few furrowed brows amongst the Outlaws coaching staff. any last minute nerves were quickly dispelled when the home side once again powered down the pitch off the back of some fine interplay amongst the forwards. Having gained a foothold in the All Black red zone Adam Cunliffe celebrated his first match in charge with his second try of the game to wrap up the match with the Outlaws posting a hard-earned 28-14 victory against a determined All Blacks side that never threw in the towel.

After the game a tired but happy Outlaws coach, Adam Cunliffe was quick to pay tribute to his charges commenting ” I thought it was a good challenge for us today and a real arm wrestle in difficult conditions. There was probably less space around the ruck than previous weeks but our ball movement is starting to look sharper which is encouraging. Defensively I thought we had a lot of grit, two of their tries came from ricocheted kicks so that stood out for us today. With the ball we generally picked the right options and stayed patient.

In terms of outstanding players, I think we were strong across the board! Our outside backs got us going pretty well and our middles were strong in defence. Mike Stewart looked dangerous and I’m looking forward to seeing how his combination with Clark progresses. Finally I just want to send best wishes to Oliver Dale after his injury today, and to let him know that the whole club wishes him a speedy recovery!”

Next week the Outlaws face a stiff challenge when the travel up to Halifax to take on last years top four outfit Siddal.