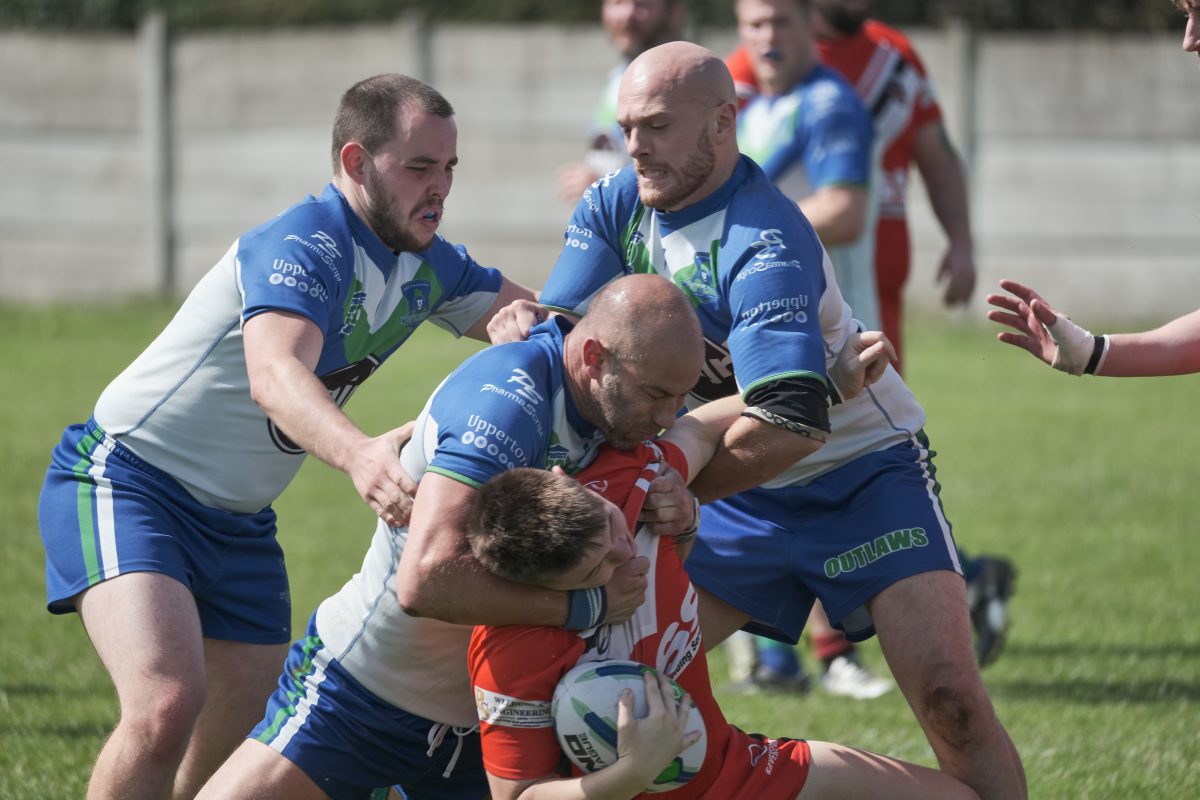 For the second home match running Nottingham Outlaws came within a whisker of registering a win only to lose out by a single score at Lenton Lane on Saturday. This time it was in their final home game of the season against Cutsyke Raiders when they came agonisingly close to inflicting a defeat on the Yorkshire outfit, leading 26-24 into the final minutes, only to suffer an agonising last minute Cutsyke try that saw them end up on the wrong end of a 30-26 defeat.

The Outlaws went into the game with the now customary list of changes to the team that lost out at New Earswick two weeks ago but the most eye-catching name on the team sheet was the return of former Outlaws star and GB international Adam Millward, named as a substitute more than five years since he last pulled on an Outlaws shirt after previously retiring from the game.

In recent weeks the Outlaws have suffered from a series of poor starts that have eventually cost them dearly and unfortunately this match was to be no different. Indeed in their very first set the Outlaws lost the ball on tackle two and three plays later the Raiders waltzed around some statuesque Outlaws defence to open up a 6-0 lead.

Two minutes later they repeated the act with the same end result, dropping the ball after trying to pass their way out of their own twenty and from the re-start the visitors scored another easy try and with less than six minutes played the Outlaws were 10-0 down and facing the prospects of a heavy defeat.

Indeed things could have been decidedly worse had Cutsyke capitalised on some further Outlaws loose play but thankfully Cunliffe was on hand to haul down his opposite number but it seemed only a matter of time before the visitors would score again with the Outlaws struggling to stay in touch with a Cutsyke side that was regularly off-loading in the tackle.

With the game already in danger of slipping away from them the coaching staff threw caution to the wind and brought on Outlaws legend Adam Millward with the match still only ten minutes old, much to the delight of the home crowd.

Almost immediately the Outlaws began to steady the ship as Millward began making inroads into the Cutsyke defence and following a big run  by the powerful forward Strachan picked up at acting half and dropped a neat ball back inside to James Hood who crashed over to reduce the deficit to 6-10.

With Millward adding to the tackling efforts of Dale and Strachan the Outlaws had steadied the ship and began to ask more and more questions of a Cutsyke side that was now under the cosh for the first time in the game having earlier threatening to run away with the match. And their resurgence was rewarded when, with twenty five minutes on the clock, they nudged ahead for the first time when Alex Whittle broke through the Raiders defence, drawing the raiders full back before passing Adam Cunliffe who had spotted the break superbly, taking a text book pass to score under the posts.

Turner converted and the Outlaws had overturned a 10 point deficit to lead 12-10.

With the wind at their backs the Raiders began the second half in similar fashion to the first, off-loading in the tackle and making good yards before scoring within two minutes of the re-start to stretch their lead to two scores at 12-20.

Stung by this reversal the Outlaws roared back into life and back to back sets saw them put the Raiders under terrific pressure and on the third repeat set Coryn Ward burst over from short range following another well timed pass from Strachan at acting half to reduce the Raiders lead to two points at 18-20.

With the second stanza reaching the mid way stage it was the Raiders that were asking all of the questions and they looked likely to score but some great defending on the line saw the Outlaws defence hold firm when a visitors score looked likely.

Having weathered the storm without conceding a try the Outlaws hit back and once again it was great work from Strachan at acting half that did the damage. This time the wily number nine spotted a gap in the marker defence, sprinting from the play the ball into open space before releasing Whittle who in turn released Cunliffe for his second of the game, a carbon copy of his first as the Outlaws crept in front for the second time in the game at 22-20.

With fifteen minutes to play the match was still wide open and Cutsyke again made the best of a half-chance, charging down an Outlaws kick on the last to score in the corner as the lead changed hands for the fifth time in what was turning into an absolute nail biter of a game!

With the clock ticking down the Outlaws thought they had the game won when Adam Millward capped off a superb return to arms with a pass out of the tackle for Jimmy Goodwin to score as the Outlaws led again at 26-24 but a try at the death by the visitors broke the home sides hearts as the lead changed hands for the seventh and final time with the score-line ending at 26-30.

After the match there were a number of players in with a shout for the man of the match award. On any other day Strachan, dale or Cunliffe would all have been more than worthy winners but on this occasion there was only one taker for the bubbly as Adam Millward caped a fantastic comeback performance with a man of the match display.

The Cutsyke match marks the end of the Outlaws home campaign for 2019. They still have one more game left to play, an away match against Bentley in three weeks time, before the coaching staff and players take a well earned break after another tough season in the Yorkshire Premier Division.