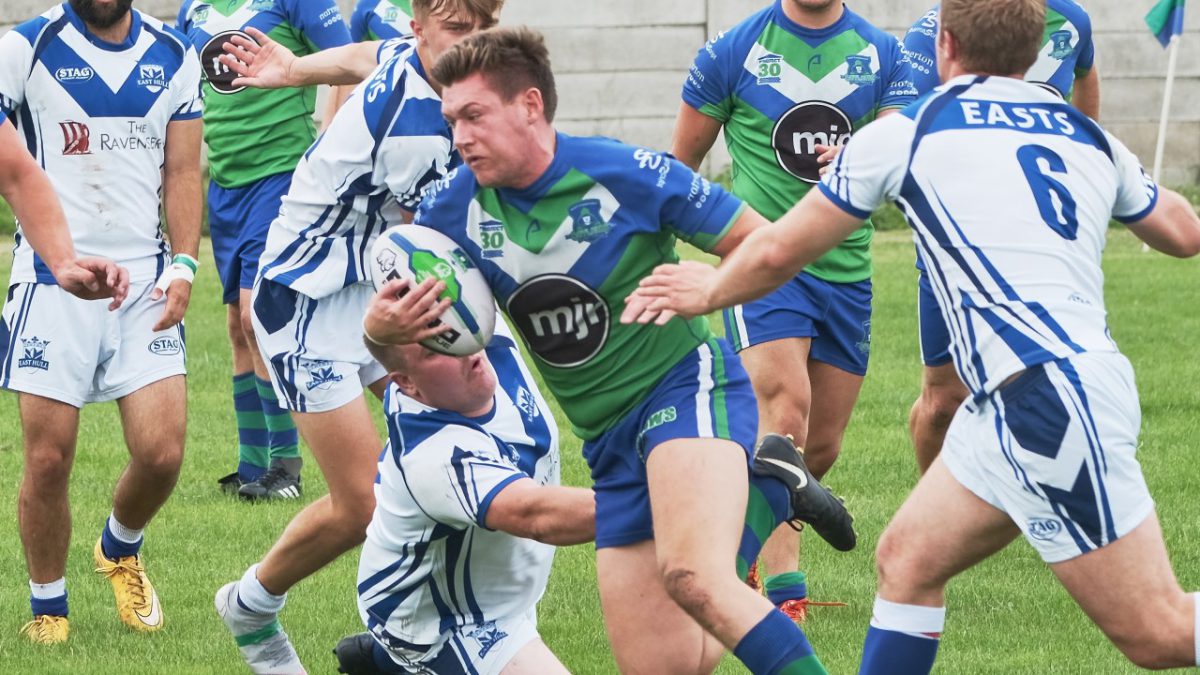 For the second match running Nottingham Outlaws came within a whisker of registering a win only to lose out by a single score at Lenton Lane on Saturday. This time it was in their home game against East Hull when they came agonisingly close to inflicting a defeat on the top four outfit, matching them try for try before ending up on the wrong end of a 38-36 defeat.

There were plenty of changes to the team that nearly brought home the bacon from Queensbury two weeks ago. There were welcome returns for a number of players who hadn’t pulled a shirt on in a while including Paul Calland, Chris Prime and Rory McQueen whilst in the backs James Hood slotted into centre and Rupert Skill came in on the wing.

The team were led around the paddock by Strachan at number nine with Squires at number seven and Alex Whittle at loose forward who was playing his testimonial game,

The Outlaws made what can only be called an appalling start to the game as they found themselves 12-0 down inside three minutes!

The home side received the ball from the kick off, advanced down the field before kicking. The ball was collected by East hull and two tackles later Leon Urry scored out wide as the Outlaws defence was caught flat footed. Then, straight from the re-start, the elusive number four scored again for the visitors, this time down the right hand side of the Outlaws defence as the visitors went 12-0 ahead with the home spectators still arriving on the touch-line!

It was this horror-show of a start that eventually to prove the difference between the two teams.

The match was in real danger of being over in the first quarter and it was imperative that the Outlaw scored next if they were to stay in contention. Thankfully they did that when the Outlaws ran on the last tackle, passing the ball between three pairs of hands before the returning Chris Prime was on hand to dive over for a welcome Outlaws score as the deficit was cut to 4-12.

The visitors were clearly rattled by the Outlaws try and dissent by one of the Hull team saw them reduced to twelve men with a yellow card. The Outlaws immediately capitalised with Alex whittle dancing over the try line followed by a second try for the powerful Chris Prime and somehow the Outlaws had overturned a twelve nil deficit to lead 14-12 with twenty-five minutes played. Unfortunately it was destined to be the only point in the game that the Outlaws were out in front.

The defensive frailties that were apparent in the opening exchanges were never far from the surface and ten minutes later a routine East Hull kick on the last tackle saw the ball land with none of the Outlaws players looking to take the catch and the loose ball was gratefully picked out of the air by the East Hull number four who completed his hat trick without a hand laid upon him!

The Outlaws did have a chance to level things up when Adam Cunliffe looked like he had got over the line but the referee somewhat harshly judged he had lost the ball in the tackle and to make matters worse another East Hull kick over the top caught the home defence looking like rabbits in the headlights and again the visitors scored without a hand being placed on them.

The visitors added the extras as the half ended with the Outlaws two scores adrift at 14-22.

It was important that the Outlaws didn’t fall further behind from the re-start and they managed to stay in touch with a better start to the second stanza than had been shown in the first. Indeed the defence seemed much tighter and two massive hits by Chris Prime saw the Outlaws stop the visitors in their tracks before turning the ball over.

Buoyed by the Prime tackles the Outlaws went hunting for points and they were soon rewarded when Rory McQueen latched onto a short ball from Strachan to score under the posts.

The conversion from bang in front was sliced wide but few realised at the time that this routine error was to prove so critical in the final outcome of the match.

Having clawed their way back into the game the Outlaws defence, like so many times this season, switched off at a quick play the ball. With no one at home the East Hull attack poured down the middle through a yawning gap in the home defence to nudge further ahead at 18-26.

Despite the setback Paul Calland reduced the arrears once again as he showed the home supporters that he had lost none of his skills as he sidestepped over from short range to score a great solo effort to drag the Outlaws back into contention at 24-26. However within minutes the visitors exploited some weak defence to hit back almost immediately to once again move two scores in front at 24-32.

As the temperature and humidity on the pitch rose the defences on both sides began to wilt and the two sides began trading try for try as Oliver Dale showed great speed and timing to latch onto a short ball from a flat pass three metres out to score only for the Outlaws to make a hash of the re-start, losing possession and allowing another East Hull try in the process.

As the clock ticked down Rupert Skill used his power and pace to reduce the deficit to one score but there was too little left on the clock and the final hooter sounded with the Outlaws losing out by 36-38 in a a game that they had matched the visitors try for try before eventually losing out by a solitary kick.

Despite the defeat there were a number of players in with a shout for the man of the match award but it was centre James Hood that deservedly took the bubbly for a fine 80 minute stint on attack and especially defence.