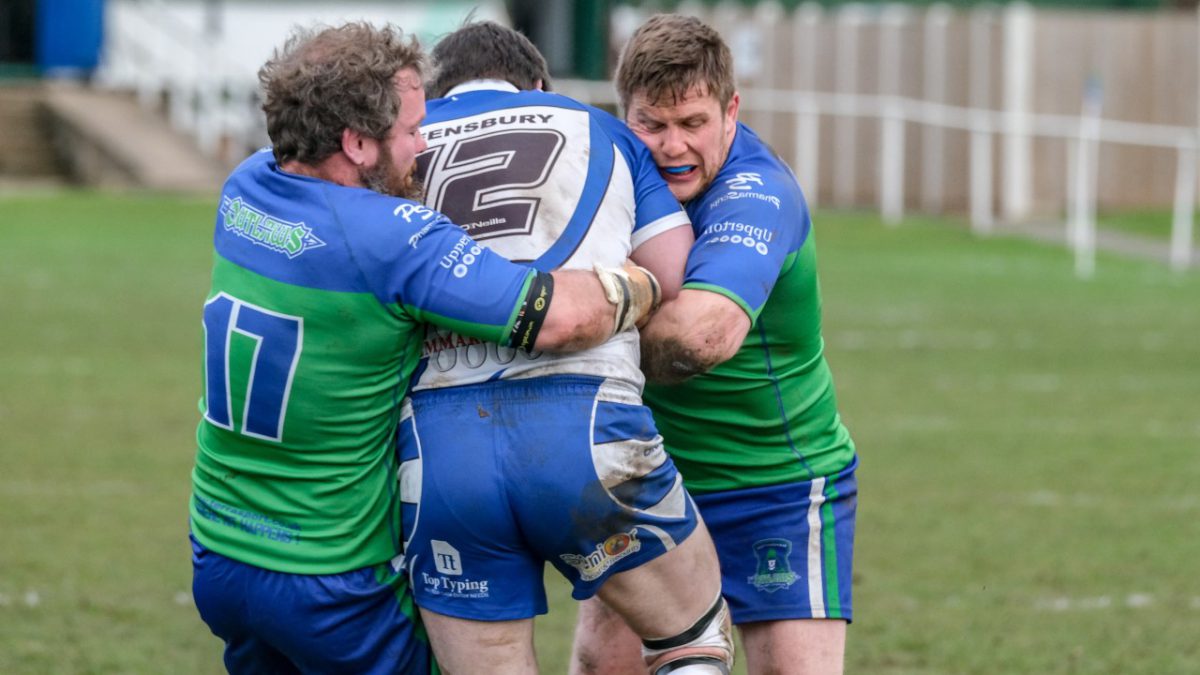 Nottingham Outlaws were within a whisker of registering a huge shock on Saturday when they came close inflicting a defeat on top four outfit Queensbury. Despite having already lost to the powerful Yorkshire outfit two weeks ago, a much-changed Outlaws team silenced the home crowd for long periods, twice holding the lead before recording a narrow 32-28 defeat in what was a hugely entertaining game.

The Outlaws went into the game with yet more changes to the line up including Luke Strauss on debut and the return of Jonny Shields for his first game in an Outlaws shirt after a gap of almost four years.  Other changes saw Alex Whittle return in the halves and George Strachan move back into the number nine shirt.

Last week the Outlaws made a surprisingly good start to the game but they slipped back into old ways and after three successive penalties they found themselves 6-0 down after less than five minutes of play and then things went from bad to worse when they made a mistake from the restart and within four tackles found themselves 10-0 down and facing the prospect of a long day at the office!

Thankfully the Outlaws didn’t buckle under the early assault and they finally managed to mount an attack of their own. There didn’t seem any immediate danger when Strachan took  the ball into contact ten metres out but despite the attention of two defenders he still managed to get a lofted pass out over the top and young winger Josh Burgin took his chance superbly, sliding in at the corner for his second try in as many games and the deficit was cut to 10-6 with McLeish converting from the touchline.

Buoyed by the try the Outlaws began to up the pace of the attack, led in no small part by the returning Shields who was starting to have a major influence on the game. In recent seasons the young utility player has been plying his trade in Australia and he brought those new found skills back to West Yorkshire, beating two players before putting in a well weighted kick into the in goal with Oliver Dale was on hand to touch down. McLeish slotted over from bang in front and the Outlaws had overturned a ten point deficit to lead 12-10.

Unfortunately the Outlaws faithful knew what was in store on the restart and their worst fears came true as the Outlaws lost the ball and from the re-start Queensbury charged into the Outlaws red zone before going over to wipe out an Outlaws lead that had lasted less than a minute!

Despite the reversal there was still plenty of vim in the Outlaws attack and on the next piece of possession the Outlaws moved the ball at pace, and Jonny Shields went from try maker to try scorer with a great shimmy that opened up a gap in the home line then side-stepped the full back for a great solo effort. Once again McLeish added the extras as the lead changed hands for the third time with the Outlaws nudging 18-16 ahead in what was turning out to be a highly entertaining game.

The first half finished with the home side throwing the proverbial kitchen sink at the Outlaws but some great scrambling defence saw the Outlaws keep their line intact and they went into the sheds still holding the narrowest of leads.

The coaching team knew they would have to dig deep in the second half and they re-shuffled their cards as Ivemey, Shepherd and Readhead all came on to give the team the benefit of their considerable combined experience!

The second stanza saw the Outlaws start well, indeed they had by far the better of the opening exchanges, pounding away at the home line but after 10 minutes of dominance they had failed to add to their slender lead. As so often happens in sport, their inability to capitalise was ruthlessly punished as the home side scored with their first attack of the half, registering a converted try to regain the lead as the home side went 22-18 ahead.

Despite the reversal the Outlaws were by no means ready to throw in the towel and they drew level five minutes later when a great inside pass by Strachan saw the hard working Dale waltz through a gap before registering his second off the game despite plenty of attention from the home defence.

At 22-22 the two sides were still level after 60 minutes of absorbing play and the match was well and truly in the balance!

Unfortunately the Outlaws were not on level terms for very long when the swirling wind saw them mess up again from the re-start and a grateful Queensbury took the ball from the ensuing scrum and three tackles later the home side restored the lead at 28-22 with fifteen minutes left on the clock.

The tiring Outlaws were now starting to struggle in defence as the home team began to up the ante, peppering the line in search of another score. However, despite a hefty advantage in possession and territory the Outlaws defence kept its nerve and then went one better, as a lofted pass was latched onto by Jonny Shields in his own twenty. With the length of the field ahead of him the young Outlaws set off on an eighty metre foot race that ended with him planting the ball down under the posts as the Outlaws silenced the home crowd by drawing level at 28-28.

Despite the breakaway try the tiring Outlaws defence were still up against it and as the game went into the closing stages the home side cut through again with a try in the corner that put them back in front at 32-28.

Some last minute heroics saw the Outlaws charge up the field and almost grab the points that their performance probably deserved but it was not to be and the final whistle saw a much relieved Queensbury side celebrating a hard earned win against a highly motivated Outlaws team that came within a whisker of victory.

After the game coach Strachan was quietly satisfied with a new-look team that continues to make steady progress adding “It was a good game played in front of a big crowd and I think they’d come out to expecting us to get well beat so I’m proud of how our lads played. It was a game we could have won although on balance Queensbury were worthy winners. First half we probably had the best of possession and Cunliffe was kicking them to death. Off the back of that Jonny Shields played some great stuff. Second half we gassed a bit and probably traded errors a bit too much but again, I’m proud of the way we played”