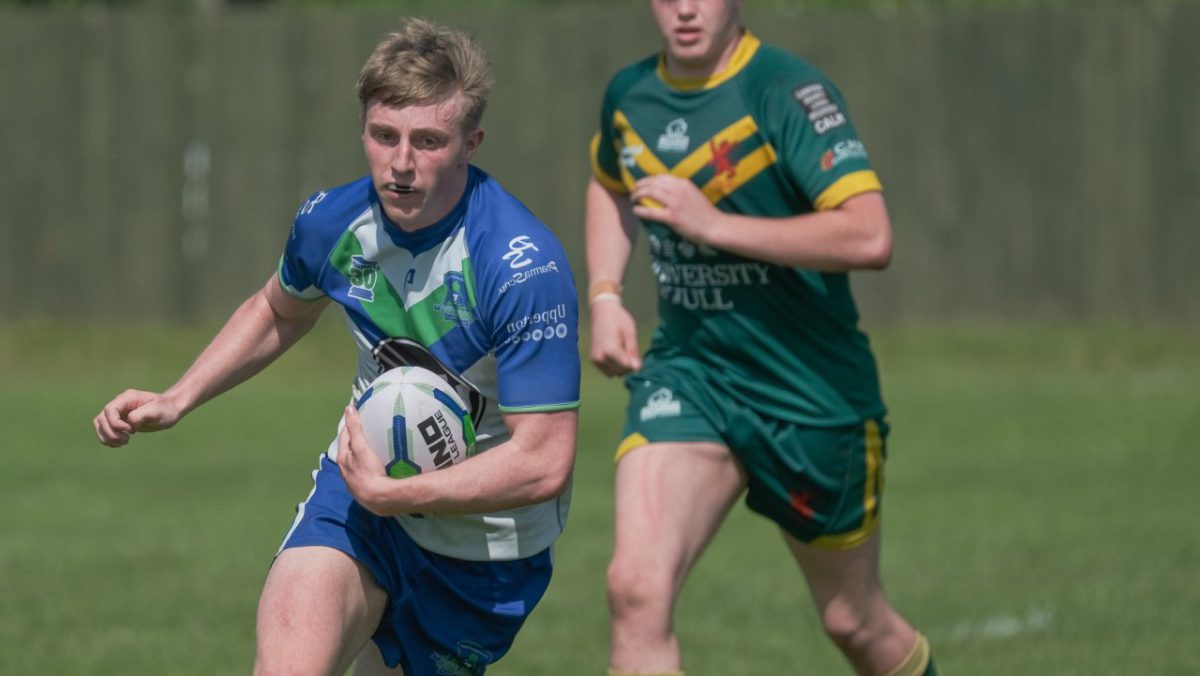 After seven long weeks without a home game Nottingham Outlaws finally returned to Lenton Lane when they entertained top four outfit West Hull on Saturday. Despite the sweltering heat the Outlaws did their best to stem the green and gold tide but they were to prove no match to a slick-handling Yorkshire outfit and they eventually succumbed to a heavy 56-6 defeat.

Despite home advantage the Outlaws faithful knew their favourites were heading for a tough day at the office with a spate of injuries and unavailabilities hitting the squad hard and once again the coaching staff to dig deep into the clubs resources in an attempt to field a competitive team. Indeed the side included no fewer than five teenagers with three on debut as Dan Palmer, Scott Pillinger and Jack O’Regan all took time off from A-level duties to pull on an Outlaws shirt for the first time.

With the thermometer registering 32C at the kick off both sides started tentatively but back to back sets by the Outlaws saw them take the early initiative but a dropped pass close to the line saw the ball go to ground and a golden opportunity to open the scoring was lost.

As often happens in rugby league football, the inability to take an opportunity was cruelly punished when on the next set a tough-looking up and under was spilled by the Outlaws and when the ball went loose it was Andy Finch who reacted first to put the Hull side 6-0 up after 10 minutes of relatively even play.

Despite the setback the Outlaws went back on the front foot looking to make amends for the error and they did just that two minutes later when debutant Dan Palmer broke clear on halfway and evaded two tacklers before scoring under the sticks for a great try  that levelled the scores at 6-6 with fifteen minutes played.

Unfortunately it was to be the last cheer of the afternoon for the Outlaws supporters!

Once again the Outlaws inability to defuse the high kick was to be their undoing and straight from the re-start they failed to the gather the ball and from the resulting scrum West Hull restored their lead, a lead they were destined to retain for the remainder of the game.

Due to the extreme heat the referee decided to play the game in four quarters and at the end of the first twenty minute period the Outlaws were still very much in contention at 6-12 in arrears. However a horror-show in the next quarter saw them leak no fewer than four unanswered try’s as the visitors made the most of some rather soft penalties that the Outlaws conceded and once again the Hull side made the most of the free ride down the pitch!

Thankfully the referee drew the second quarter to a close before any more damage could be done but at 6-34 the match was already decided as a contest with forty minutes still to play.

When the third quarter re-started the Outlaws faithful hoped rather forlornly that the Outlaws could get back into the form that they showed briefly at the start of the match. However the visiting defence was too good for the Outlaws to make an impression and when Andy Finch, Ethan Baynes and James Leigh scored scored three more trys in quick succession there was a real danger of the visitors hitting something of a cricket score as the third quarter came to a close.

At 50-6 with twenty minutes to play the Outlaws did thankfully manage to stem the tide and in the final quarter they had their most consistent period in the game. I deed some great defensive work from Dale and Strachan they managed to restrict the slick West Hull outfit to only one try. However they could not add to their score despite some dominant field position and the referee mercifully ended the game with West Hull registering a comprehensive 56-6 victory.

It had been yet another tough day at the office for the depleted Outlaws. However there was still time for the home fans to give some well earned applause to Alex Whittle who registered his 100th game in an Outlaws shirt and for man of the match Adam Cunliffe to receive his bubbly for an excellent defensive performance saving the day on several occasions with some excellent one-on-one defence.

The Outlaws home matches continue to come thick and fast for the Outlaws and next up are Queensbury who visit Lenton Lane next Saturday.