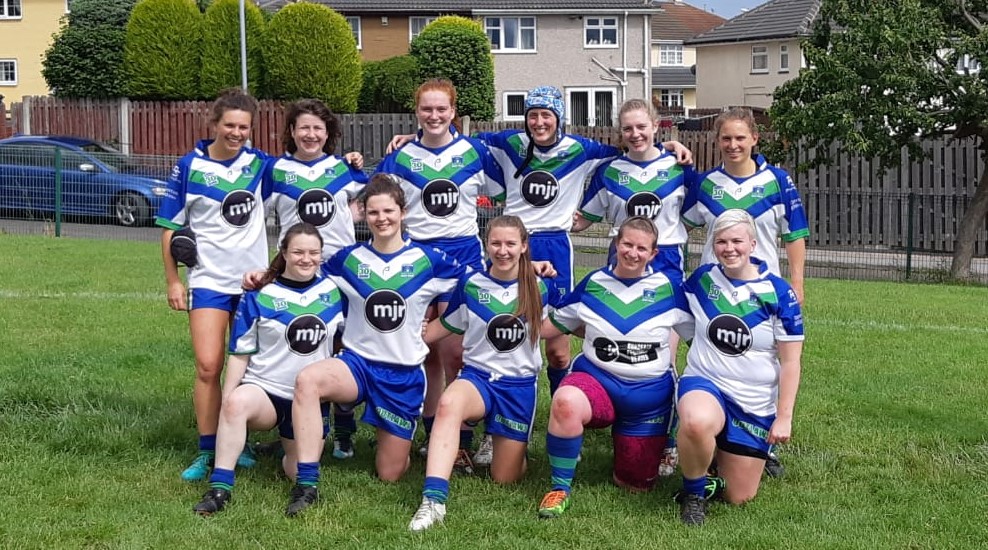 Nottingham Outlaws travelled to Dearne Valley Bulldogs on Sunday afternoon for their first game of the 2019 season, emerging 10-38 winners. Following hard work behind the scenes, Nottingham Outlaws had five players making their debut, with six returning from last season.

Dearne Valley came out of the blocks with some fierce defence, bundling the Outlaws centre into touch following receipt of the kick off. Following five minutes of sustained attacking pressure, the Outlaws defence was eventually broken following some slick hands, allowing the Bulldogs to score out wide.

From here the Outlaws responded. Withstanding the Bulldogs pressure Outlaws turned the ball over with good field position. This was followed by a strong carry and great fend from debutant Gina Watson, who finished off a fine run with a neat offload to fellow debutant Hannah Marland, who ran 25m before being brought down just 10m from the try line. Straight from the resulting play the ball, despite Outlaws having tackles in hand, the ball was spread wide to fullback Iz Moore, who backed her pace, dummied to the supporting winger and sliced through to score, scoring the Outlaws ladies first try of the season.

The teams then went set for set with both defences withstanding immense pressure. A mistake on the last tackle for Dearne Valley following pressure from Violet Coppin gifted the Outlaws possession allowing them to begin the set away from their own try line. Similar to the first score, great field position was earnt through the work of the forwards, resulting in Jo Lumb scooting over from acting half, putting the Outlaws ahead. The attacking shapes were starting to work out for the Nottingham side, with half back Violet Coppin showing a dummy to her forwards and using quick feet to race 40m, only to be stopped by her opposite number, concluding a very competitive first half.

The start of the second half saw both teams reduce in players, following the unfortunate extension of the Bulldogs injury list. With reduced numbers and more space to play with, Outlaws attack began to flow more. Great edge defence from Jo Towndrow gave the team some much needed territory. Following some great support play, a storming run from Hannah Marland followed by a quick play the ball created an overlap allowing Gina Watson to walk in for the third Outlaws try of the afternoon.

A lapse in concentration following a troubling attacking kick gifted the Bulldogs four points, which was followed by an impressive conversion, putting pressure back on the Outlaws outfit.

Eventually Outlaws regained possession, following up a strong defensive effort with a strong run in attack Pheobe Nicholls was awarded a penalty. Eager to get on the score card she took the tap herself, leaving defenders on the floor and finding the try line.

Following some great handling between Vicki Harvey and Iz Moore, a confident Jo Lumb dummied to the supporting Zoe- Rose Higgins whose excellent line drew the markers, allowing Lumb to race 60m down the touch line, and dot the ball down under the sticks. Scoring under the black dot enabled Juliet Porter to add the two points, the only Outlaws conversion of the game – a testament to the Bulldogs forcing the majority of the tries to be scored out wide.

With everyone wanting to get their hands on the ball, impressive drives from Jo Towndrow and Zoe-Rose Higgins resulted in Jo Lumb completing her hat-trick, when some slick handling started by Violet Coppin was completed with Lumb stepping inside the sliding Bulldogs defenders for her third try of the afternoon.

The pressure didn’t let off for the Bulldogs, with the Outlaws again camped on their try line, a delayed pass from Juliet Porter found a surging Vicki Harvey who looked to be in under the sticks, but somehow the Bulldogs kept her out, until she managed to sneak out a spectacular offload to the Grace Rhoden whose support play was second to none all afternoon, who beat the final defender to score.

With the Outlaws players getting more comfortable with the game another superb run by Gina Watson saw her beat several tackles before offloading to an oncoming Pheobe Nicholls, who would not be stopped 20m away from the try line, handing off the oncoming defenders to score her second of the afternoon.

With full time looming, the Outlaws had put in a dominant performance to open up their set of summer fixtures, but there was still room for more points. After an altercation at the play the ball the Outlaws made full use of the distracted marker. Quick hands to the edge through Juliet Porter and Vicki Harvey ended with Iz Moore slotting into the line, replicating her first attempt of the afternoon, and concluding the outlaws points for the afternoon.

Thanks go to Dearne Valley Bulldogs who are always very accommodating, and to the referee for being patient with the inexperienced players. Nottingham’s player of the match went to Gina Watson, who made a huge impact in attack with some great drives and offloads. Dearne Valley’s coach highlighted Nottingham’s Iz Moore, who not only got on the score card, but she also diffused many of the Bulldogs attacking kicks with her safe hands and quick feet. Dearne Valley’s number 8 was picked out as their player of the match, carrying the ball tirelessly all afternoon and being held up over the line on several occasions. The squad are looking forward for the return fixture at Lenton Lane, and hope that the injuries are quickly overcome.

With the Outlaws having to drop kick all conversion attempts, only one was successful, justifying the need to invest in a kicking tee for subsequent fixtures!