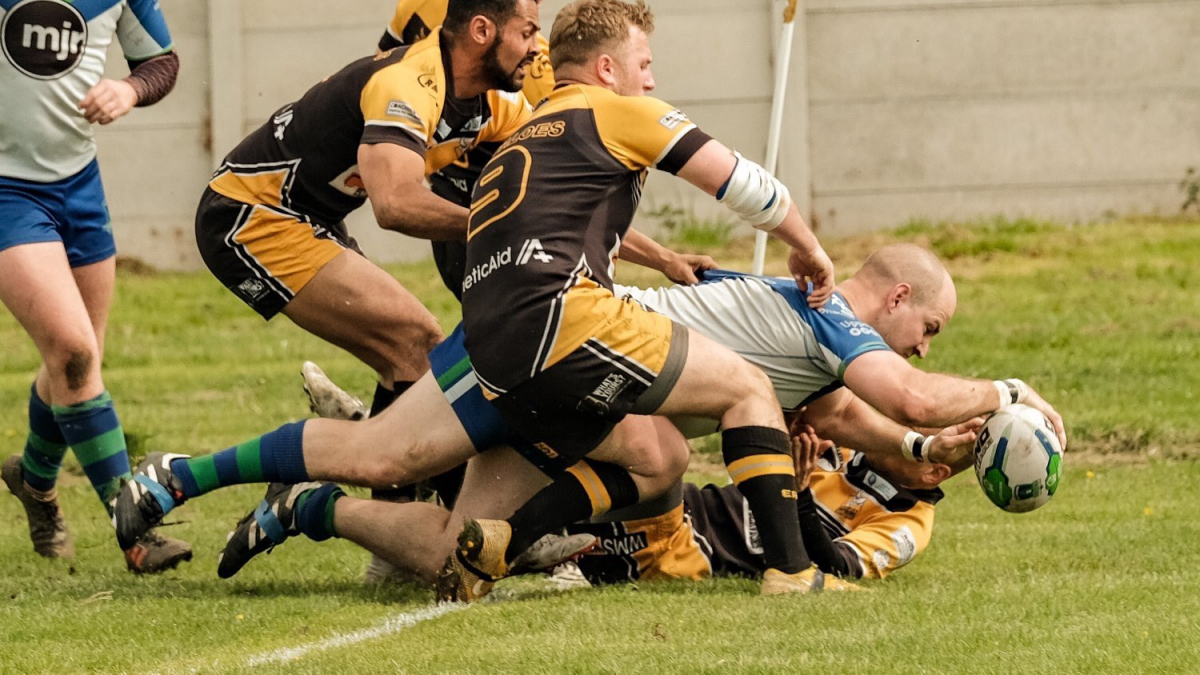 Nottingham Outlaws recorded their second successive league win of the season as they overwhelmed an ultimately out-gunned Bramley outfit at Lenton Lane on Saturday. They did it the hard way, overturning a 22-8 deficit with 38 unanswered points as they cruised to a much deserved 46-28 victory. Indeed it was a highly satisfying win against a team that had put over 100 points past the Outlaws in the last two times the teams had met!

The Outlaws went into the game with a number of changes to the squad that brought home the bacon from Lindley last weekend. Adam Cunliffe came back into the side at fullback Loic Radegonde came in for his first of the season on the left wing with Harry Binnion returning on the right hand side. In the forwards there were changes too as Charlie Clarke and Ollie Perry returned to add some additional mobility to the forwards. There were a number of changes on the bench too with Sam Andrews and Blake Turner coming in to add some pace into the replacements.

The Outlaws struggled in the early stages of the game as Bramley began to move the ball around with confidence, repeatedly off-loaded in the tackle and  it came as no surprise when the visitors opened up a 6-0 lead with less than ten minutes on the clock and it without some good scrambling defence from the Outlaws it could have been more!

After some heavy pressure from the visitors the Outlaws began to settle and they finally got onto the scoreboard with a superb opening try. The move started deep in the Outlaws half as Ollie Perry broke through the Bramley line and the ball passed through four pairs of hands before Brad Moss went in at the corner for an excellent try. Indeed he was fouled in the act of scoring so Ollie Perry had two successful shots at goal to nudge the Outlaws back in front at 8-6 with fifteen minutes played.

The Outlaws try acted as a wake up call to the visitors who lapped up a series of dropped balls by the Outlaws to put the home side under tremendous pressure. Indeed in the space of nine first half minutes they powered their way into a commanding lead. Indeed they scored no fewer than three unanswered tries to open up a commanding 22-8 lead as the Outlaws struggled for ball and field position against a slick-handling Bramley outfit.

With the Outlaws three scores adrift they really couldn’t afford to leak another score if they were to get anything out of the game. They first  managed to stem the flow with some stoic defending before at last breaking the siege with a series of attacks late in the half. Ollie Perry led the way, almost getting over the line but in the next set the ball swept down the favoured left hand side of attack as Jimmy Goodwin broke clear to feed Adam Cunliffe and the fleet-footed fullback swept in for the best try of the half.

It was an important score that brought the Outlaws back into contention at 14-22 down as the half time whistle went.

The coaching staff used the half time break to re-shuffle their reserves as Sam Andrews and Blake Turner joined the fray to ask a few more questions of the Bramley front six.

The Outlaws started the second half much the same way that they had finished the first, moving the ball at pace and from the early stages of the second stanza it was clear to see that the first half exertions had taken their toll on the visitors who were rapidly begging to run out of gas!

As the Outlaws upped the ante the opposition defence began to fall off the tackle and the home side began to cut loose. With only four second half minutes played the deficit was cut to two points as Ollie Perry burst onto a short ball to score a well deserved try. Then, four minutes later the lead changed hands for the fourth time in the game as George Strachan broke from acting half to cut through down the blind side before releasing Loic Radegonde who swept in for his first try in an Outlaws shirt.

The Radegonde score had seen the Outlaws overturn a fourteen point deficit to nudge their way back in front at 24-22. It was a lead they were destined to hold for the remainder of the game!

Having got back in front with two early second half efforts the Outlaws were in no mood to take their foot off the gas and they went in search of more points. And they soon found them!

Yet again the scores came down the left hand channel. Oliver Dale did the early damage with a searing break before unloading to Jimmy Goodwin. The powerful Yorkshireman took route one to the line, trampling over three defenders in the process of scoring as the Outlaws lead extended to 30-22.

Five minutes later the lead was further extended as Adam Cunliffe scored a wonderful solo effort. With the tackle count still in the early stages he surprised even his own team mates by chipping over the top before collecting the ball on the bounce and sprinting around his opposite number for a magnificent solo effort.

With the Bramley defence now in disarray the Outlaws refused to take their foot off the gas. James Hood showed that despite being a prop forward he has plenty of speed, sprinting sixty metres down field to get his team into the Bramley red zone. On the next play Strachan opened up the tiring visitors defence with yet another searing break down the blind side to set Jimmy Goodwin free for his second of the game.

Within minutes Goodwin went from try scorer to try creator, blasting his way down field for fully seventy metres before releasing Charlie Clarke for a well deserved try for the industrious loose forward.

As the clock ticked down the visitors did manage a late try to close the gap to 46-28 but it was too little too late as the Outlaws ran out deserved 46-28 victors.

After the game the highly appreciative Outlaws showed their appreciation having witnessed a 22-8 deficit turn into a 46-22 lead with their favourites scoring no fewer than 38 points without reply! They looked on eagerly as the man of the match was awarded. There were plenty of hats thrown into the ring with plenty of candidates making a strong claim but it was Yorkshire powerhouse Jimmy Goodwin that grabbed the bubbly celebrating his 100th game in an Outlaws shirt with two tries and a dominating performance down the left hand side of the pitch.

After the match George Strachan was quick to acknowledge the progress made by the team in recent weeks, The ebullient Outlaws coach commented ” In our last game at home we struggled to make breaks never mind finish them off and score tries so it was pleasing to score so many points. This was another step up performance wise from last weeks win at Lindley. Across the whole field we had players Bramley struggled to cope with but standouts for me were Olly Perry in the middle who always got his head through the line and Jimmy Goodwin who built on his from performance from last week. It was great to be part of Jimmy’s 100th game who is one of our club’s real characters”
Next week the Outlaws are at home again and they will be looking to continue their climb back up the table when they entertain Queensbury at Lenton Lane.