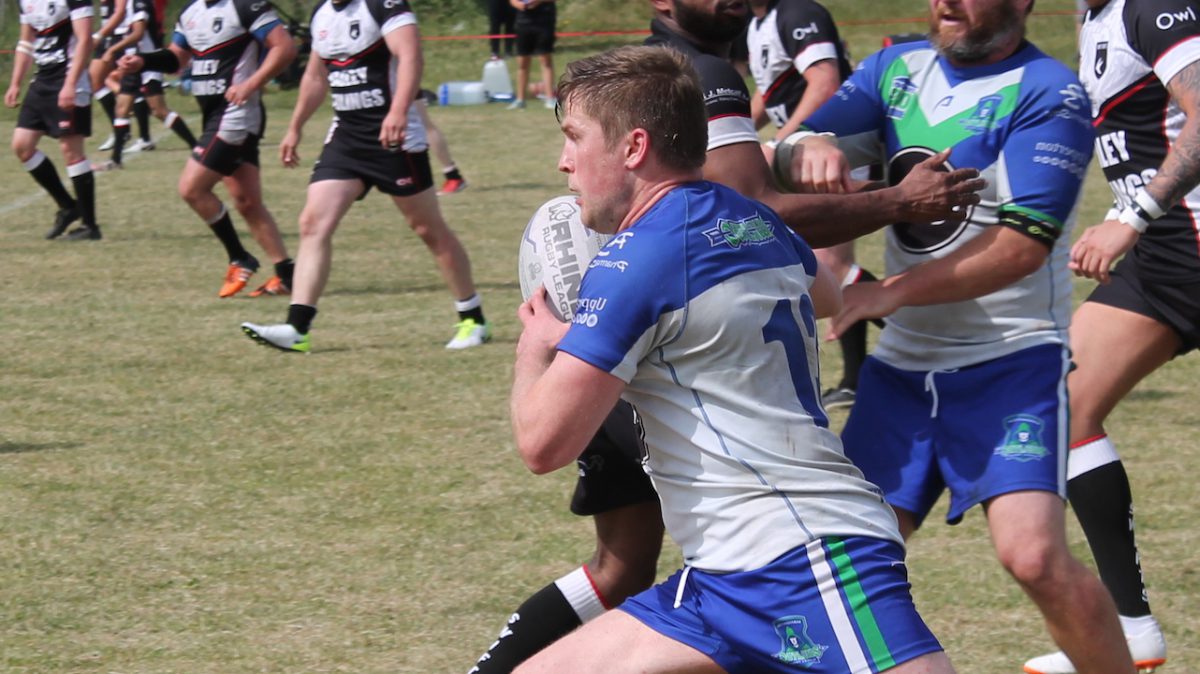 Nottingham Outlaws ground out a second successive away win in the Yorkshire Premier Division on Saturday when they recorded a hard-earned 36-32 against Lindley Swifts. The match wasn’t always the prettiest to watch but the Outlaws stuck to the task, twice coming from behind to finally run out victors and in doing so, keep their chances of reaching the end of season play-offs alive.

After a three week gap in the fixtures the Outlaws squad looked a little rusty going into the game and a few late injury call offs didn’t help either, forcing player coach George Strachan into a number of changes to the side that won so well at Siiddal last time out.
Most of the changes were in the threequarters as Tyrelle Anderson-Brown and George Prewett both came in on debut and youngster Harry Walton dropped into the vacant wing spot. The forwards looked more settled with Scott-Nelson and Ephraim both returning from injury and Jimmy Goodwin stepping up from the backs to do a stint in the second row. The bench contained a mixture of experience in the shape of Barton and Page alongside youth in the shape of debutants Ollie Lack and Cameron Chynoweth

The Outlaws couldn’t have made a better start if they tried, storming up the pitch from the get-go and with less than two minutes on the clock Alex Whittle scythed through the Lindley line with his trademark show and go before offloading to Oliver Dale who planted down under the sticks without a hand laid on him as the Outlaws opened up a 6-0 lead.

The lead didn’t last long as straight from the restart the Outlaws overplayed in their own forty, losing the ball into touch. From the resulting scrum the home side attacked at pace and Scott Bradley levelled the game at 6-6 as the Outlaws were made to pay for their profligacy. However, their loose play was the least of their worries as minutes later hooker Ben Scott-Nelson had to be helped from the pitch with a gaping head wound that ended his involvement in the game with only six minutes on the clock, forcing Walton into the front row as Cameron Chynoweth came on for his debut.

Anderson-Brown  who drew the full back superbly before offloading to Ciaran Dean as the Outlaws crept back in front at 12-6.

Having taken the lead the Outlaws once again needed to consolidate but yet again they made a meal of the re-start to put themselves back under pressure and after almost ten minutes of continuous home attack the home team drew level as home winger Ben Armitage broke through some at best, mediocre Outlaws defence to make it 12-12 and then three minutes later the Swifts swooped into the lead as Kieran Blocker nabbed a short range effort to make it 16-12 to the home team with fifteen minutes of the first half remaining.

Despite being under the cosh for much of the game so far, the Outlaws always looked like they would pose a threat with ball in hand and they showed their scoring prowess with two quick-fire try’s just before the break. The first came when Joe Barton looked like he was held in the tackle but somehow he managed to slip the ball out to the supporting Walton who dived over for a fine opportunistic try and then three minutes later Barton went from try maker to try scorer as the big forward latched onto a short ball from Strachan and powered over the home line.

Dean added the extras for both try’s to put the Outlaws 24-16 in front as the half time whistle went on a first half in which both sides had led at various stages in the match.

All eyes were on the casualty bench at half time as the injury hoodoo that has affected the club in recent weeks looked like it was about to come back and haunt them. Indeed Ali Waring, Jimmy Goodwin  and Harry Walton were all struggling with first half knocks but thankfully some sterling work by the medical staff somehow got them back into one piece and they were able to carry on!

In contrast to the first half, which had been something of a score-fest at times, the second stanza soon developed into an arm wrestle with both sides struggling to find a way through some stubborn defence. Indeed, after twenty minutes neither team could engineer a try and the Outlaws 2-try lead was looking better and better!

However as the teams began to tire in the last quarter the score board soon began ticking over again!

With twenty minutes left the match sprang to life on the back of some poor Outlaws discipline, with five successive penalties against them ending in Kieran Blocker grabbing his second of the game and  minutes later Jack Haigh grabbed another home try as Lindley levelled at 24-24 with fifteen minutes left on the clock and then the home team crept in front with a penalty from bang in front and it looked like the Outlaws were about to miss out after being in front for most of the match.

Indeed in recent months that has been the case on many occasions but this new look Outlaws side has plenty of battling spirit and self belief in them and they roared back down the pitch to put the Swifts line under siege.

With six minutes left Strachan popped a lovely short ball to the effervescent Oliver Dale who ran like an express train through the gap before side stepping the full back for a try that nudged the Outlaws back in front at 26-30. The try capped off a great afternoon at the office for the hard working captain who grabbed the man of the match bubbly in the process of scoring!

Having administered the killer blow the Outlaws stepped up a gear and added another try as Ciaran Dean rounded off a great display by opening up the home defence with another mazy run before offloading to Ali Waring who dived over to score and in doing so stretch the Outlaws lead to 26-34 with two minutes left on the clock.

A try by Ben Armitage for Lindley seemed like it might put the cat amongst the pigeons as the home side drew back to 32-34 but a Ciaran Dean penalty on the final whistle settled the Outlaws supporters nerves as they deservedly wrapped up the game with a hard won 36-32 victory.

After the match coach Strachan had mixed emotions with the display but was keen to point out the positives, commenting “For me the real positives came in attack where we made lots of breaks and our support play was excellent. In a team with plenty of new players and combinations Ciaran Dean and Oliver Dale stood out with the amount of involvements they had but also the quality of their running. We weren’t quite at the races this week with our defence which was disappointing, however I’m sure we can put that right for our game at Lenton Lane this coming Saturday.’

Indeed all eyes will be on Lenton Lane this Saturday as the Outlaws look to keep their top four hopes alive against an Upton side who have play-off aspirations of their own!