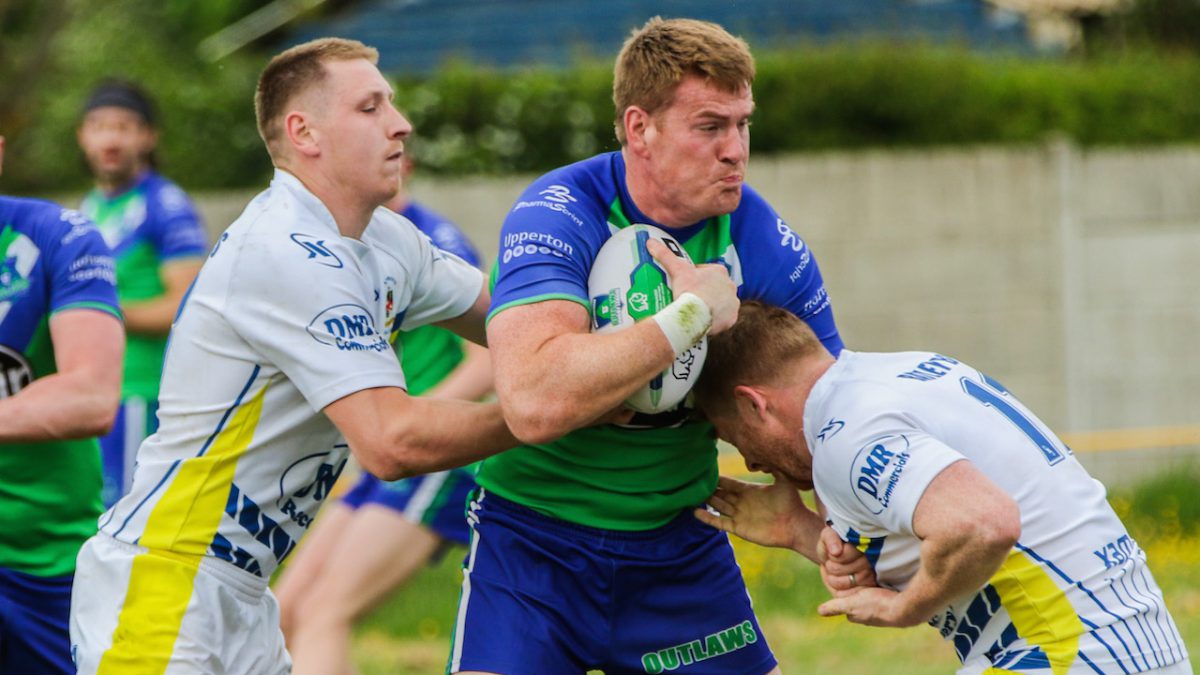 Nottingham Outlaws played their second game of Yorkshire Premier rugby league at their Lenton Lane home on Saturday. However, once again they came up empty handed when they were beaten 22-4 by last seasons league winners Batley Boys. However they did have the consolation of finally grabbing that elusive first home try when war horse Paul Calland won an eighty metre foot race to score that inaugural Outlaws home try!

As is the norm this season, the Outlaws made a swathe of changes to the team that lost at Bramley last time out, indeed only four of the team named had played the week before!

There were three debutants on show with Joe Barnes earning his stripes at full back and Dan Palmer slotting into the centres whilst Ollie Perry was added to the interchanges. In the forwards Tom Kay, Andrew Jackson, Alex wright and Mike Stewart came back into the front six adding some size to the pack

The Outlaws kicked off in perfect rugby league weather and seemed to have made a good start, pressing the Batley line with a couple of good charges from Oliver Dale that broke the first tackle but the home side could not get that elusive home score against some enthusiastic Batley defence.

As the game unfolded it began to develop in similar fashion to the Outlaws last home game against East Hull. For all their efforts the home side just could not break through some suffocating visitors defence and their inability to make yardage began to have an impact on the Outlaws play. Indeed they became more and more ragged as the half progressed in a game that was being played increasingly in and around the Outlaws forty.

As the Outlaws play became more scrappy the Batley attack began to threaten the home line and they soon began to pull away. Indeed two try’s in quick succession saw them build a 12-0 lead and from this point on the Outlaws were always chasing the game.. The first try came on the back of successive lost balls early in the tackle count as Tome Brooke opened up the visitors account for a converted try and seven minutes later Gavin Davies doubled the Batley lead, scoring a short range effort with the help of back to back penalties.

The final fifteen minutes of the first stanza were played almost exclusively in the Outlaws half of the pitch as the home side were repeatedly pinned in their own twenty with a series of fine Batley kicks and then found themselves unable to make any headway on their sets, being forced to kick continually from within their own forty.

With lack of field position more scores appeared inevitable but some good cover tackling by debutant full back Joe Barnes kept the Outlaws line intact. However the next Batley try eventually came when Jonathan Marsden crashed over from short range despite the attention of three Outlaws tacklers, when he really should have been stopped.

At 16-0 in arrears the half time break could not come quickly enough for a lacklustre Outlaws who had looked well off the pace for most of the first half. When it finally did the come, the coaching staff immediately made changes as youngster Ollie Perry came off the bench for his debut whilst Adam Simm came into the hooking spot for the injured Harry Walton.

The second half started where the first had ended, with play once again restricted almost entirely to the Outlaws half of the field. However this time the home defence were more than a match for the visitors and after twenty second half minutes of play neither side had been able to manufacture an opening.

With the second half developing into something of a stalemate an Outlaws try might have seen them edge back into the game. However on the sixty fifth minute another Outlaws defensive error saw them fail to match up out wide and Josh Scruton effectively put the game to bed with another converted Batley try that extended their lead to 22-0.

Disaster then struck as Tom Kay, one of the liveliest Outlaws forwards on the pitch, dislocated his knee, a nasty injury that looks likely to see the boom second rower on the side-lines for a prolonged period.

As the clock ticked down it appeared that the Outlaws would have to wait for another game to get that elusive first try. Indeed it seemed like Batley might score again with the clock ticking down but a miss-timed pass saw the ball go to ground. As the visitors paused for the whistle veteran half back Paul Calland swooped on the ball and raced fully eighty metres and despite a last ditch tackle attempt he made it over the white wash to open up the Outlaws account at their new home, much to the delight of the home fans!

The Calland try was pretty much the last act of the match as the referee soon drew proceedings to a close with the Outlaws left to reflect on another home defeat with the scoreboard registering a 22-4 score line in favour of the Batley Boys. However a better second half performance, in which each side scored one try, should give some encouragement to the Outlaws coaching staff, providing they can get some consistency in selection, starting with next week’s trip to Siddal.