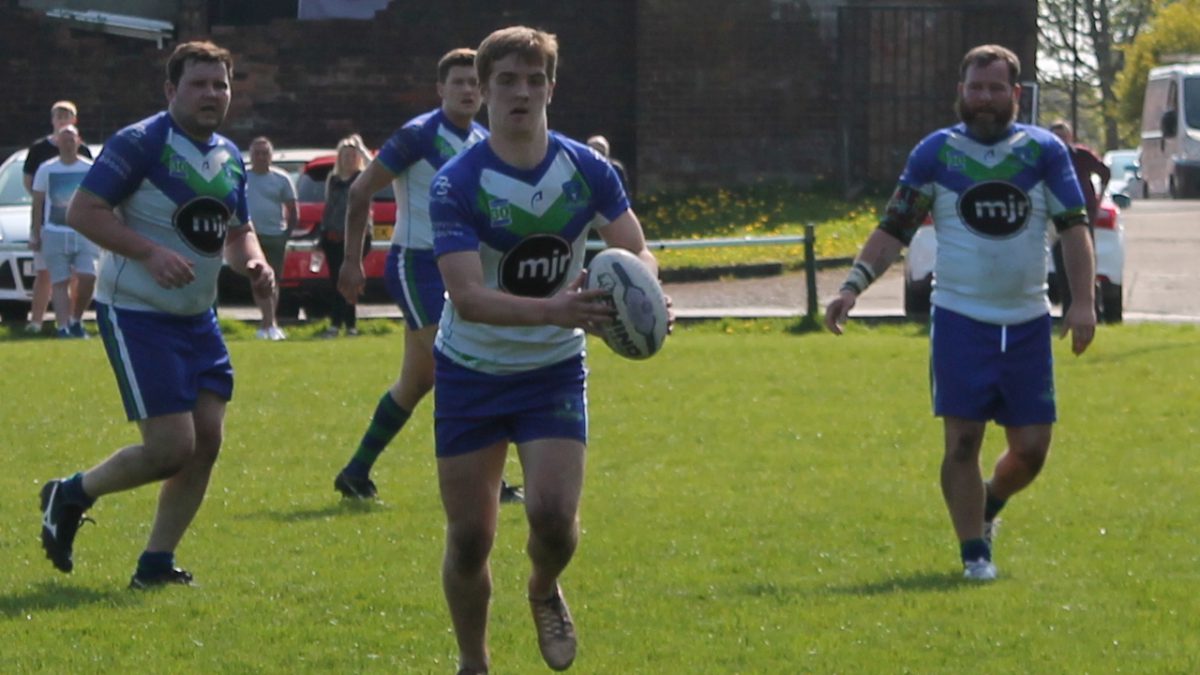 Nottingham Outlaws travelled up to Leeds on Saturday with a makeshift squad to face a newly promoted Bramley side. Despite the odds they battled well for long portions of the game before finally running out of gas and conceding seven try’s in the second half to end up on the wrong end of a 50-16 score line.

The Outlaws were up against it before the match started when the hard pressed coaching staff had to make no fewer than ten changes to the team that lost out against East Hull last weekend. However it was not all bad news as a number of players made their seasons entrance including a well earned debut for winger Adam Hemmingway, a welcome return to the fray for scrum half Alex Whittle whilst old boys Adrian Chaima and Sam Andrews came in for their first games of the season.

Despite the pre-match upheavals the Outlaws started strongly enough, exerting some early pressure but they soon found themselves up against it when the new look defence failed to number up  and quick fire trys for Brown and Hammond saw Bramley take an 8-0 lead after only eight minutes of play and the prospects of a tough day at the office were becoming more and more real by the minute!

Despite the poor start the Outlaws rallied well and began to make some yardage down the middle of the paddock, led by some good work by live wire forwards Ali Waring and Oliver Dale backed up well by Matt Horner who was running some good lines in the centre channel. They were eventually rewarded for the good response when a strong Harry Walton carry made inroads into the Bramley red zone and a Whittle drop off close to the line saw George Strachan open the Outlaws account with a well taken try. Dean slotted over and at 8-6 the Outlaws appeared to be back in the game.

However disaster then struck when prop Will Ephraim limped from the field leaving their pack short of size and power against a big home front six.

The Outlaws had battled their way back into contention but their come-back was thwarted as Foster-Mathews swept in for a home try right on the stroke of half time to extend the home lead to 14-6 as the players headed for the welcome cool of the dressing roo.

The coaching staff had somewhat limited interchange options at the break with player coach Shepherd drafted into action as a replacement.

The second stanza started pretty much the way the first had started with an early Bramley score but the lead was soon pegged back when Strachan bagged his second this time from acting half as the Outlaws went try for try against the home team as the scoreboard ticked over to 20-12 with fifty minutes.

The heat and lack of interchange options were always going to take their toll on a fast tiring Outlaws side and there was an air of inevitability about it as they began to leak try’s against a home side that was growing in confidence. Indeed the rampant home side ran in four try’s in the space of ten second half minutes as they quickly pulled away from a fast tiring Outlaws side and in doing so put the result well and truly beyond doubt at 40-12 with ten minutes to play.

To their credit the Outlaws kept battling and they had one more go at the home line as Adrian Chaima made great yards down the middle. The livewire centre seemed to be held up short but somehow he managed to slip the ball to George Strachan and the nuggety coach crashed over for a try and in doing so completed a deserved hat trick to peg the lead back to 40-16.

The Strachan try was just reward for a brave Outlaws effort but three more Bramley tries in the last ten minutes saw the home side stretch their lead out to 50-16 and in doing so record their first win of the season against a well beaten Outlaws side.

After the game Outlaws weary player coach George Strachan was quick to praise the troops who had battled bravely for the cause despite the odds, saying  “we were doing it tough with injuries this week but the challenges you get for playing rugby league are what makes it so unique. It’s not for everyone but I know the boys enjoyed working hard today. Next week we’ve got a double header and I’m confident we can get two good teams out. The whole team did the Outlaws proud today and I would like to give massive respect for Sam Andrews who travelled all the way from London to represent the club and play 80 minutes at prop.”

Next week the Outlaws host two fixtures at their new Lenton Lane ground starting with the Academy who host Sherwood Wolfhunt at 12.30pm followed by the Outlaws first team who have a tough looking fixture against last seasons league leaders Batley Boys.