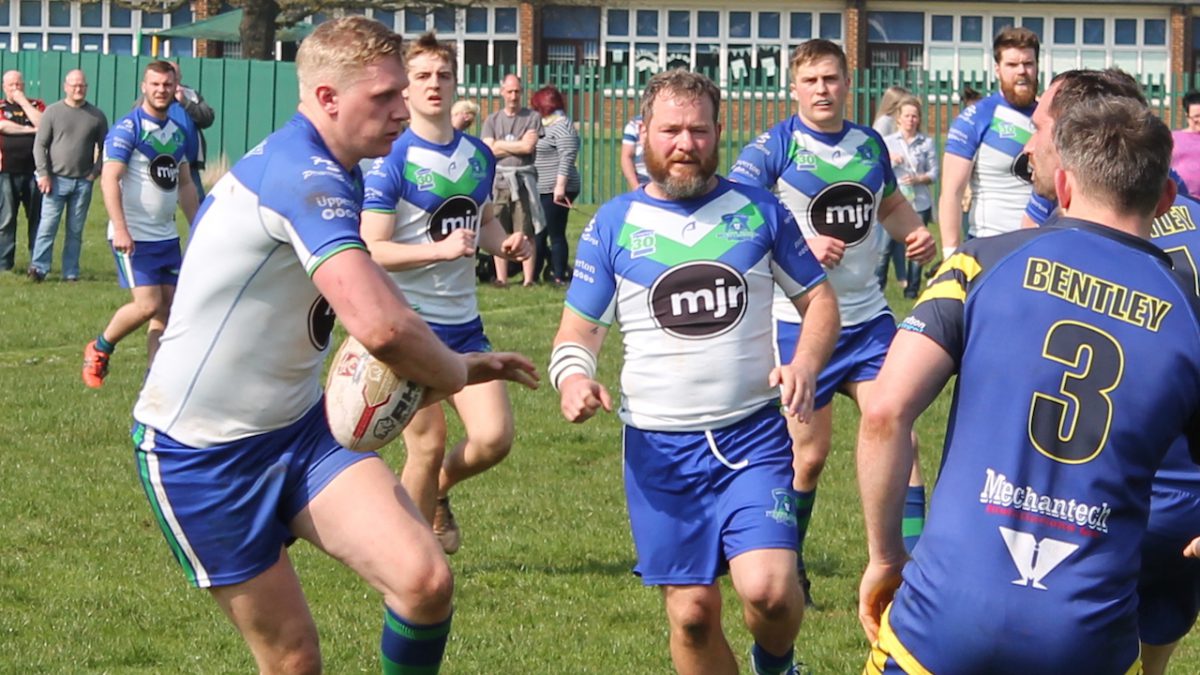 Nottingham Outlaws failed to back up last weekends away victory when they slipped to a disappointing 36-24 defeat at Bentley on Saturday.

The Outlaws led for much of the game, indeed they led 24-14 with twenty five minutes to play but lack of ball and another heavy penalty count in the red saw their lead slip away in the sweltering heat.

The Outlaws went into the game with yet another swathe of changes as the coaching staff were forced to switch the team around. An injury to Adam Simm forced player coach George Strachan into the stand off role. Toby Cornish, Dan Williams and Sam Dennison came in on debut whilst Ben Knight, Alex Wright, Tom Kay and Will Martin were added to the seventeen that won up at York last time out.

The match kicked off with the Outlaws playing into the breeze and after a fairly even start the Outlaws scored a try out of nothing. A long touch finder by Cunliffe saw Bentley awarded a scrum ten metres from their own try line. From the restart the ball went to ground and whilst the home defenders stood watching Oliver Dale swooped on the ball for a walk-in try with not a hand laid on him! Dean added the extras to put the Outlaws 6-0 up

The home side roared back into action and consecutive penalties kept the Outlaws firmly under the cosh and they duly conceded when Brad Maltby crashed over from short range as the home side levelled at 6-6 with fifteen minutes on the clock.

The match was developing into an interesting clash of styles. The Bentley side utilising their size and power to make big yards down the middle of the park whilst the Outlaws used their speed and ball handling skills to hit the home side from long range.

The ability of the Outlaws to attack from distance was illustrated on the twentieth minute when Adam Cunliffe broke through the home defence on the halfway line, drew the Bentley full back and released Ciaran Dean who duly did the honours by planting the ball down under the sticks before adding the extras to put the Outlaws 12-6 in front. They almost extended their lead two minutes later when they appeared to have won the race to the ball in the in goal area but the referee disallowed the try.

The pacey Outlaws were not to be denied however and Oliver Dale extended their lead further with a show and go before crashing over the line for his second of the game despite plenty of attention from the home defenders. Dean kept his 100% record in tact as the Outlaws went two scores up at 18-6.

The stage appeared set for the Outlaws to go into the break well in command but some poor play on the last tackle saw the home side regain possession for a back to back set and Callum Hickling waltzed through some poor Outlaws defence to close the gap to 18-14 as the halftime whistle blew.

The message from the coaching staff at half time was to reduce the error count and pick up the defence which was starting to blow a bit towards the end of the first half. Indeed, Sam Dennison and Toby Cornish both game on for debuts in an attempt to freshen up the tiring pack

The Outlaws started the second stanza on the back foot and with incessant pressure a home try seemed imminent. However the ball went to ground on the last tackle and again it was the Outlaws who reacted quickest as Ciaran Dean swooped on the ball. There was still the full length of the pitch to go when the elusive full back picked up but he had the pace to beat everyone as he went on a hundred yard footrace to the other end of the field, before planting the ball under the sticks then adding the extras to extend the Outlaws lead to two scores at 24-14.

At 24-14 the Outlaws had built up a healthy lead but from this point on game suddenly began to run away from them. A string of penalties and decisions against the Outlaws saw them starved of the ball and field position. Indeed Outlaws frustrated skipper Oliver Dale questioned some of the decisions and was dispatched to the sin bin for the first time in his career.

The depleted Outlaws defence soon began to tire and they were duly put to the sword by a rampant home side that used its size and power to break through wilting Outlaws defence. Indeed with play almost exclusively restricted to the Outlaws half of the field the travelling Outlaws fans had seen it all before as Marty Hall, Jack Craswell and Ryan Crasswell all scored tries as Bentley ran away with it to finish well ahead at 36-24.