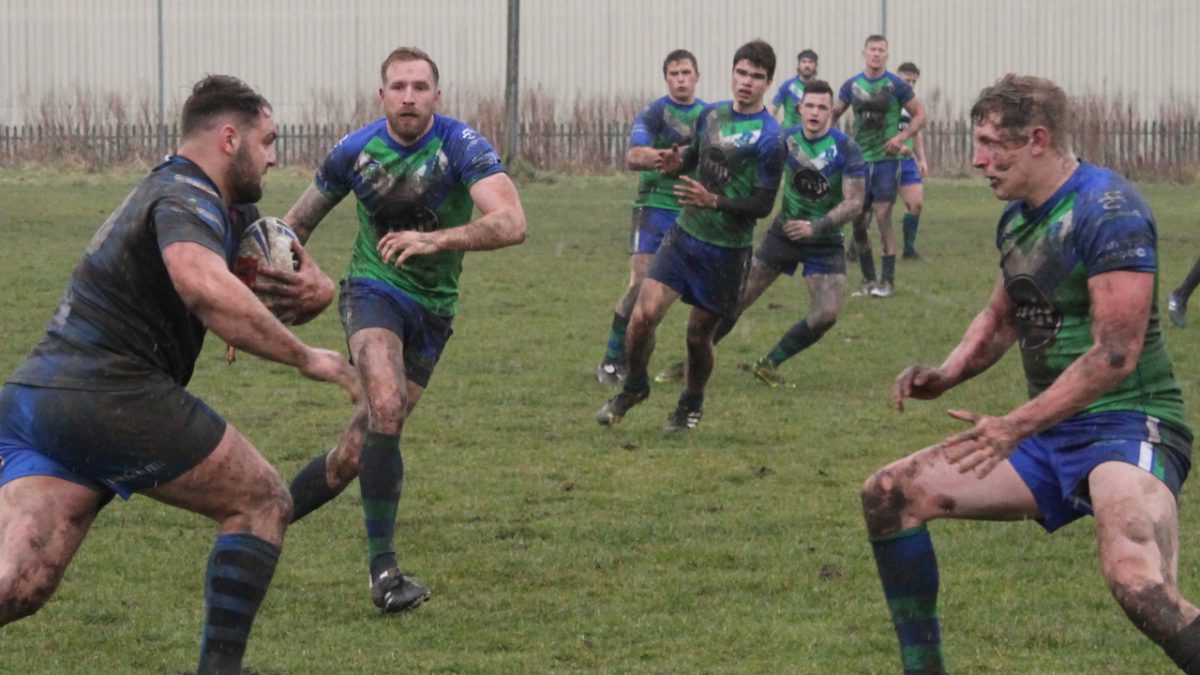 Nottingham Outlaws began their 2018 rugby league campaign with a trip up to Yorkshire for an away fixture at Queensbury in the Forty-20 Cup. In swamp like conditions a new-look Outlaws side put up an excellent performance, leading for most of the game before falling away in the final quarter to succumb to a narrow 14-10 defeat.

The Outlaws took to the field with a side containing a host of changes to the team that finished last seasons campaign. Indeed a quick look down the team sheet saw no fewer than eleven changes to the seventeen players that last pulled on a jersey in the defeat at East Hull back in August 2017. The changes included no fewer than six players on debut with Pete Vickers and Jake Tilford forming a new wing partnership whilst Trent rookie Brad Moss came in at hooker to lead the side around the paddock.

Further debutants were evident in the pack with Tom Kay and Mike Stewart pulling on an Outlaws shirt for the first time along with Carl Strickson who took up one of the interchange positions.

The match kicked off in a light drizzle and with standing water on the ground the conditions were hardly conducive to free flowing rugby league football. However despite the conditions it was the Outlaws who seemed to handle the elements better in the opening exchanges. Indeed for the first twenty minutes they dominated field position and possession.

Debutant forwards Mike Stewart and Tom Kay were soon making plenty of metres against the home defence and on the back of it the game was played increasingly in and around the Queensbury forty metre zone. However lack of composure at key moments saw the Outlaws fail to capitalise and some good home defence meant that the scoreboard remained untroubled after 20 minutes of Outlaws dominance.

It seemed that the Outlaws inability to put points on the board might come back to haunt them but a fine break by Andrew Jackson saw the centre hauled down just short and from the quick play the ball Brad Moss powered over from short range to open the scoring with a well taken try. Ciaran Dean added the extras to nudge the Outlaws 6-0 ahead.

Having broken the deadlock the Outlaws began to up the pace and the result was another Outlaws score. The try scoring move started on the Outlaws halfway line and once again it was Andrew Jackson who instigated things, drawing the home defence before passing to debutant winger Jake Tilford. The number five still had plenty to do but despite some heavy traffic he managed to touch down in the corner to stretch the Outlaws lead to 10-0 with thirty minutes played.

As the half ticked down the home side at last put some pressure on the Outlaws line and despite being under the cosh for most of the first half they grabbed a late try as a high crossfield kick was collected by Dave Greenwood who out jumped a statuesque Outlaws defence. Ethan Sharp reduced the deficit further as the Outlaws first half lead was cut to 10-6 despite dominating most of the play.

The Outlaws coaching staff used the break to reshuffle their cards with Elliott Whetham and George Strachan coming on to give the props a bit of a breather whilst warhorse Steve Page and rookie Carl Strickson also joined the fray.

The opening quarter of the second stanza looked was pretty much like a carbon copy of the first, with the Outlaws dominating field position and possession to lay siege to the home line. However a lack of composure and cutting edge at key moments saw twenty minutes of territorial dominance come to nothing as the busy home defence kept the Outlaws at bay when  ever a score looked likely.

As so often happens in rugby league, a teams failure to capitalise on dominance is often ruthlessly punished and Queensbury did just that.  With the clock showing sixty minutes of play a rare foray into the Outlaws half ended with a well taken try for the home team as Jack McMillan scooted over under the posts to level the scores and Ethan Sharp added the extras as the home side nudged ahead for the first time in the game at 12-10.

As the match entered the final quarter the Outlaws play became more ragged as they chased another score but as the playing conditions deteriorated the busy home defence began to pin the Outlaws in their own forty and a resultant penalty saw the home side nudge further ahead  at 14-10 to close out the scoring and leave the Outlaws players contemplating yet another game that they could and probably should have won on the balance of play.

However despite the loss the coaching staff should take plenty of positives from the game. With no fewer than six players on debut and with the promise of more to come, the Outlaws have plenty of room for improvement and they will be looking to show this when they entertain Lindley Swifts in the next round of the pre-season cup on Saturday.