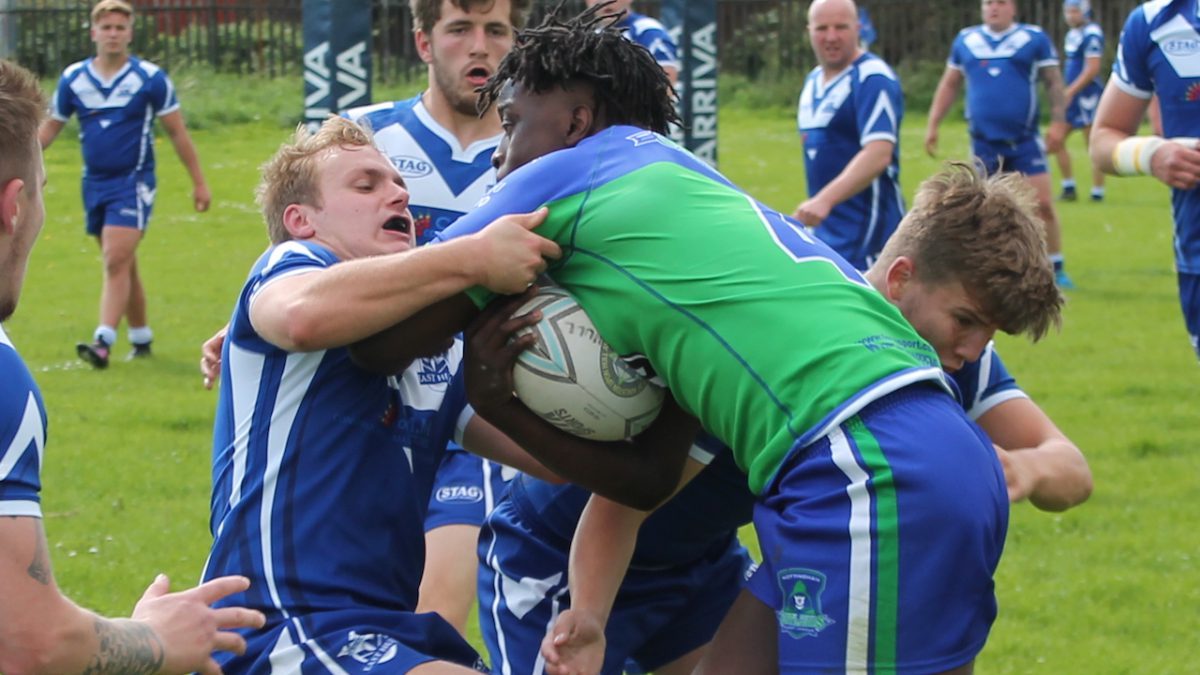 Nottingham Outlaws just failed to register that elusive win when they were pipped at the post at East Hull on Saturday.

Indeed they led for most of the game but a number of controversial decisions saw the match slip away from them in the dying minutes succumbed to a late try that meant they finished on the wrong end of a 26-20 scoreline.

The Outlaws went into the game with more or less the same line up that lost out to Beverley last time out. Indeed the only changes were in the backs as Andy Musvaburi came into the centers and James Young returned to duty at half back which freed up George Strachan to return to regular pack duty.

After almost a month without a game the travelling faithful expected the Outlaws to be more than a little ring rusty, but in fact they started the match in great shape. They moved the ball with confidence from the opening minutes, with halfbacks James Young and Adam Cunliffe orchestrating the opening attacks well despite pairing up for the first time.

Playing with confidence the Outlaws clearly took their opponents by surprise and they opened the scoring when Alex Whittle, growing in stature in his new loose forward role, sliced open the home defence with his trade mark show-and-go before offloading to Adam Cunliffe who won the foot-race to the line to make it 4-0 to the Outlaws with five minutes on the clock.

The early score gave a great boost to the Outlaws confidence and they dominated the opening quarter as the forwards, led by powerful hooker Chris Prime, laid on a great platform.

With the Outlaws well on top more scores soon followed. Adam Simm looked to have scored only to be judged as held up in goal. However two minutes later another superb run from acting half saw Chris Prime carry the ball deep into the Hull forty and on the next play Adam Cunliffe split the Hull line and engineered the ball to Oliver Dale who crashed over the line to make it 8-0 to the Outlaws.

Indeed the Cunliffe-Dale combination then repeated the move four minutes later with the same end result as Dale notched his second of the game with a carbon-copy effort that stretched the Outlaws lead to 12-0 after twenty minutes of pretty much one-way traffic.

Indeed they could have had more points if a harsh refereeing decision had not seen an Adam Simm try ruled out for offside when he touched down after a great Cunliffe grubber.

After a near faultless opening quarter the Outlaws looked to have built a great platform to take them to victory but a couple of errors saw the home side grab the initiative and start to chip away at the Outlaws lead.

The opening Hull try came off the back an Outlaws kick that sailed out on the full, giving the home side the ball in the Outlaws forty and two tackles later Harry Eastwood crashed over for the home side. Five minutes later the ball was stripped from the Outlaws prop Wil Ephraim but a scrum was awarded and from it the home side doubled their tally as Joe Laws swept into the corner to reduce the Outlaws lead to 12-8.

The second quarter saw the game turn into something of a stalemate as neither side could gain any ascendancy and any danger to the Outlaws line was dealt with by swarming defence with Tom Horner at full back mopping up superbly whenever the home side broke through. However the Outlaws looked like they had broken the deadlock when the home side moved the ball down the line and Sam Campbell intercepted only for the referee to pull him back for offside.

This proved to be the last play of the half as the referee drew the first stanza to an end with the Outlaws holding a slender 12-8 lead.

The half time break gave the coaching staff a chance to reshuffle their cards as Jimmy Goodwin came into the backs and war horse Stew Readhead and Dan Wilson came into the front six to add some fresh legs.

The second stanza started with neither side able to gain the ascendancy but after an even passage of play East hull cut loose and with good hands down the blind side Joe Rustill scored and then added the extras to nudge the home side ahead for the first time in the game at 14-12.

Despite the setback the Outlaws went back on the attack and five minutes later they grabbed the lead back when a superb grubber by Alex Whittle on the last tackle saw Oliver Dale pounce on the ball to complete a superb hat trick that nudged the Outlaws back in front at 16-14.

It looked like the game was about to swing in the Outlaws favour with two pieces of drama in the space of five minutes. The first came when a high tackle on Sam Campbell left the young winger needing prolonged attention and the home side were reduced to twelve men as a result. Then, two minutes later, Adam Cunliffe went on a great run, offloading to Oliver Dale who put in a superbly weighted kick and Andy Musvaburi pounced to extend the Outlaws lead to 20-14.

Under intense home pressure the Outlaws were pinned in their own half as a series of refereeing decisions began to go against them and with no ball and no field position to work with the Outlaws lead was eventually wiped out as Liam Smith levelled at 20-20.

As the clock ticked down it looked like the match might finish level but East Hull nicked it at the death when they broke down the middle only for the ball to be dropped in the tackle. As the Outlaws players stopped and waited for the whistle the referee waved play on and Joe Rustill went over for his second as the Outlaws players looked on in disbelief!

The whistle went a minute later with the Outlaws nursing yet another defeat in what has become familiar circumstances!

Despite the loss the Outlaws had more than matches their opponents for much of the game and several players were in the frame for man of the match. All of the forwards did well, with Chris Prime, Wil Ephraim, Ali Waring and George Strachan getting through a ton of work. Oliver Dale would normally have took the bubbly with his well taken hat-trick but it was Alex Whittle who won the award for a great all-round performance in the loose forward position.