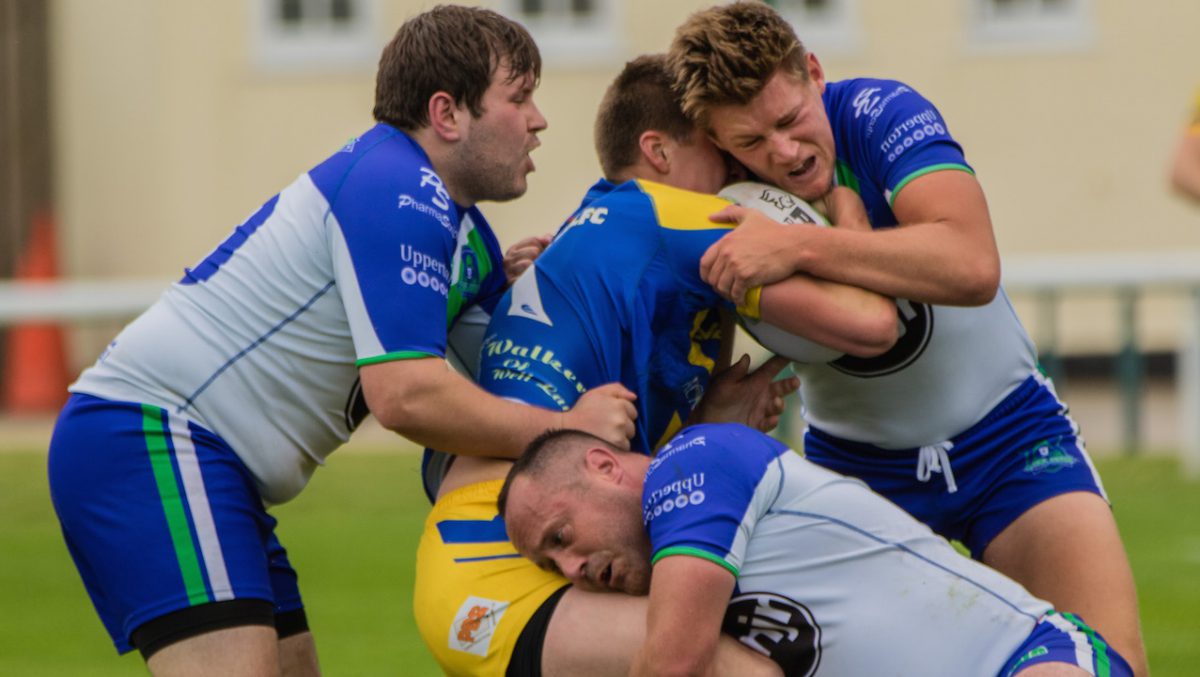 Nottingham Outlaws search for that elusive victory goes on when they failed to hold onto a winning lead for the second consecutive game. Once again they came from behind to establish a six point lead before crumbling in the closing stages and ending up on the wrong end of a 22-34 losing score line against fourth placed Beverley at Highfields on Saturday

After nine successive defeats the coaching staff were confident going into the game, fielding a relatively settled side, in contrast to all of the chopping and changing that has hampered the side this season. Indeed there were only four changes to the side that ran North Hull close last week with Adam Simm coming into the centres and Alex Whitle retuning at loose forward.

The only other changes were on the bench with Ben Scott Nelson and Adrian Chaima coming back into the interchange positions.

The omens for an Outlaws win didn’t look that good when Elliot Wtham limped off after two minutes of action, taking no further part in the game and forcing the home side to operate with only three on the bench for the remained of the match.

After a fairly even opening phase the Outlaws fell behind on the sixth minute when visiting scrum half Lewis Poskitt set up a superb try with a perfectly weighted reverse kick that was pounced on by Billy Ribey, a score that had even the home supporters applauding.

Five minutes later the Beverley lead increased to 10-0 and it was that man Poskitt who did the damage again, chipping over the top and collecting on the bounce before passing to Steve Conley in support to extend the visitors lead to 10-0 with only 11 minutes on the clock and a heavy home defeat seemed very much on the cards.

To their credit the Outlaws managed to stem the tide by upping their defensive game and in doing so stop the Beverley side from adding any more scores.

However they could make little headway in attack, due in no small part to their inability to keep hold of the ball. Indeed, after thirty minutes of play the Outlaws had failed to get into the Beverley forty metre zone and had only completed three sets in what can only be described as a miserable first half hour by the home side.

As the first half entered the last ten minutes the Outlaws at last managed to mount some pressure on the home line, forcing back to back sets and as the clock ticked down they finally got on the scoreboard.

The try came when they ran the ball on the last tackle, passing down the line and as the Beverley defence closed in Cunliffe released Jimmy Goodwin who crashed over to open the home sides account. Cunliffe added the extras to reduce the Beverley lead to 10-6 as the half time whistle went.

At 10-6 the Outlaws had somehow managed to claw their way back into a game that seemed to be slipping away from them and they went into the half time break buoyed by the narrowing score line.

It was imperative that the Outlaws made a strong start to the second stanza but they started the second half in pretty much the same fashion as they did the first, struggling to get out of their own forty, making mistake after mistake and their profligacy was soon punished when Lewis Poskit opened his account to extend the Beverley lead to 14-6.

Stung by this reversal the Outlaws hit straight back and it was the returning Alex Whitle that did the damage, scoring a try out of nothing to reduce the home deficit to 10-14. Once again the home side had stopped the rot and fought their way back into the game when it appeared to be slipping away from them.

As the half progressed the Outlaws continued to struggle to get out of their forty and once again it was their inability to complete sets that was the main problem as time after time they dropped the ball in possession.

With the clock reaching the three quarters mark the Outlaws at last mounted a serious attack and they were immediately rewarded when a superbly weighted Alex Whittle kick was pounced on by Adam Cunliffe and he went one better, adding the extras to put the Outlaws ahead for the first time in the game at 16-14.

The Outlaws lead didn’t last long as they lost the ball on the restart and from a subsequent penalty the visitors levelled at 16-16 and it was all to play for.

With ten mintes left on the clock the Outlaws scored their best try of the game. There seemed little on as the ball went down the line inside the Outlaws twenty metre zone. However a great burst saw Cunliffe break clear and he in turn set Adrian Chaima clear for a superb sixty meters run that saw the flying Welshman scorch under the sticks as the Outlaws went into the lead again at 22-16.

Many of the home supporters started to think that this was going to be the game that would finally see them break their long losing run, however their hopes were dashed in cruel fashion.

The meltdown started when the Outlaws failed to gather a Beverley cross field kick and as the ball bounced clear the visitors claimed to have scored a hotly disputed try. The Outlaws players paused and then reeled in shock as the referee inexplicably awarded an eight point penalty try to put Beverley in front at 24-22.

The late score completely knocked the stuffing out of the Outlaws and they leaked further tries to Alex Calvert and Bobby Howdle to to rub salt into the wound and the game slipped away to close out with Beverley registering a commanding 34-22 victory.

After the game the disconsolate Outlaws players waited for the man of the match presentation and the bubbly deservedly went to Alex Whittle who made an excellent return to the side after missing the last three games.

The Outlaws now have the luxury of a three week break before they resume the search for that elusive win!