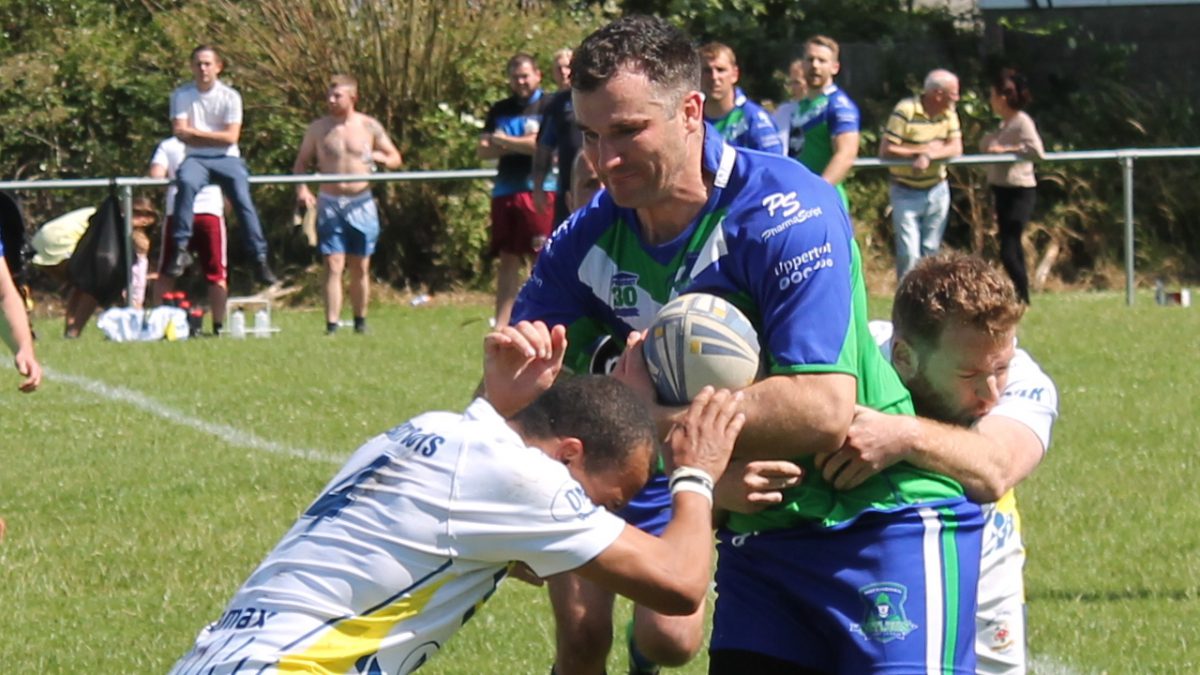 Nottingham Outlaws came out second best at the home of unbeaten league leaders Batley Boys on Saturday. Despite the defeat they showed plenty of spirit against the high-flying Yorkshire outfit before they succumbed to a ninth successive loss, losing out 56-6.

The Outlaws went into the game with their now customary plethora of changes. Indeed they made no fewer than nine to the side that pushed Siddal all the way last weekend. Most of the changes were in the backs with youngster Matt Horner coming in on debut at fullback and James Young and Elliot Whetham forming a new centre partnership. With Harry Walton on the left wing there were no fewer than four changes in the five three quarter slots.

The match started in the sweltering heat and with the Outlaws playing down quite a significant slope. Indeed they made good use of the incline in the opening exchanges and with Strachan and Cunliffe moving the ball around with confidence they dominated the opening exchanges with three sets in and around the Batley red zone.

Not for the first time this season the Outlaws failed to cross the whitewash despite applying consistent pressure and they were made to pay for it as Jay Price slipped out of the tackle on the half way line and broke clear to open up a 6-0 home lead in their first real attack of the game.

Despite the reversal the Outlaws continued to press on the back of some excellent kicking by Adam Cunliffe and when the ball eventually came back to the elusive half back he shaped to pass before scything through the line for an excellent solo effort that levelled the match at 6-6 with ten minutes played.

The scoreboard didnt move in the next ten minutes of play. Indeed after twenty minutes of play the Batley tactic of one-up rugby was being dealt with pretty well by an enthusiastic Outlaws defence. However, a change in tactics by the home side saw them cut loose.

The problems started in the 22nd minute when the Outlaws switched off in the tackle allowing the Batley player to unload in the ruck and with the Outlaws defenders still drifting back onside Jay Price latched onto the ball and scored his second of the game to put the home side 12-6 up.

The change in tactic soon began to have an effect. With more and more gaps appearing in the Outlaws defence the score board began to tick round at an alarming rate in favour of the home side. Indeed in the final ten minutes of the first half Josh Whiitwell, Adam Bingham went over for try’s whilst Josh Richter grabbed a brace. All four were converted by Adam Bingham to complete a desperate phase in which the Outlaws had conceded 24 points without reply as the league leaders put them to the sword.

When the referee brought the first period to a close the scoreboard was registering a huge 30-6 lead in favour of the home team and the travelling supporters feared the worse in a second half that would see the Outlaws having to play up a significant slope.

Indeed the Outlaws were soon under the cosh in the second half but some good tackling by Whitwell, Waring and Strachan kept the home side out and after ten minutes of second half play the Outlaws defence had regrouped well and they began to ask some questions on attack. Indeed Sam Campbell crossed the line and touched down in the corner only for the final pass to be somewhat harshly judged forward.

Despite the ever-increasing home lead the Outlaws refused to throw in the towel and they battled well, putting  pressure on the home line but just failing to find the killer pass that would reward them for their efforts.

As the clock ticked down the Batley attacking machine roared intyo life again and a brace of try’s by Adam James saw the home side stretch the lead to 56-6 before the referee brought the match to a close with the Outlaws still bravely hammering away at the Batley line in the final minutes of the game.

After the match the exhausted players re-grouped and listened for the man of the match announcement. There were plenty of players in the frame despite the one-sided score-line. Matt Horner had a great debut on attack and defence whilst Elliot Whetham, Oliver Dale, George Strachan and Ali Waring all put in a great defensive shift. However the bubbly deservedly went to halfback Adam Cunliffe who worked tirelessly in an attempt to breathe life into the Outlaws attack, kicking well and scoring all of his teams points.

Despite the defeat the Outlaws coaching staff found plenty of positives in what was undoubtedly a gutsy performance in difficult circumstances. Indeed Coach Strachan was quick to praise his charges, commenting  ”The scoreboard reflects how clinical Batley were and they played some great rugby but I don’t think it shows the improvements we made this week. We’ve had some closer scores this season and played a lot worse. Our forwards linked up really well and created a lot of space for us to work with. We consistently got our plays off and that’s a big step up from where we’ve been all season.  Standouts for me were Cunliffe who had his best game in the halves for us this year and the promise shown by young Matt Horner who we just need to get into the game more regularly and in better situations”