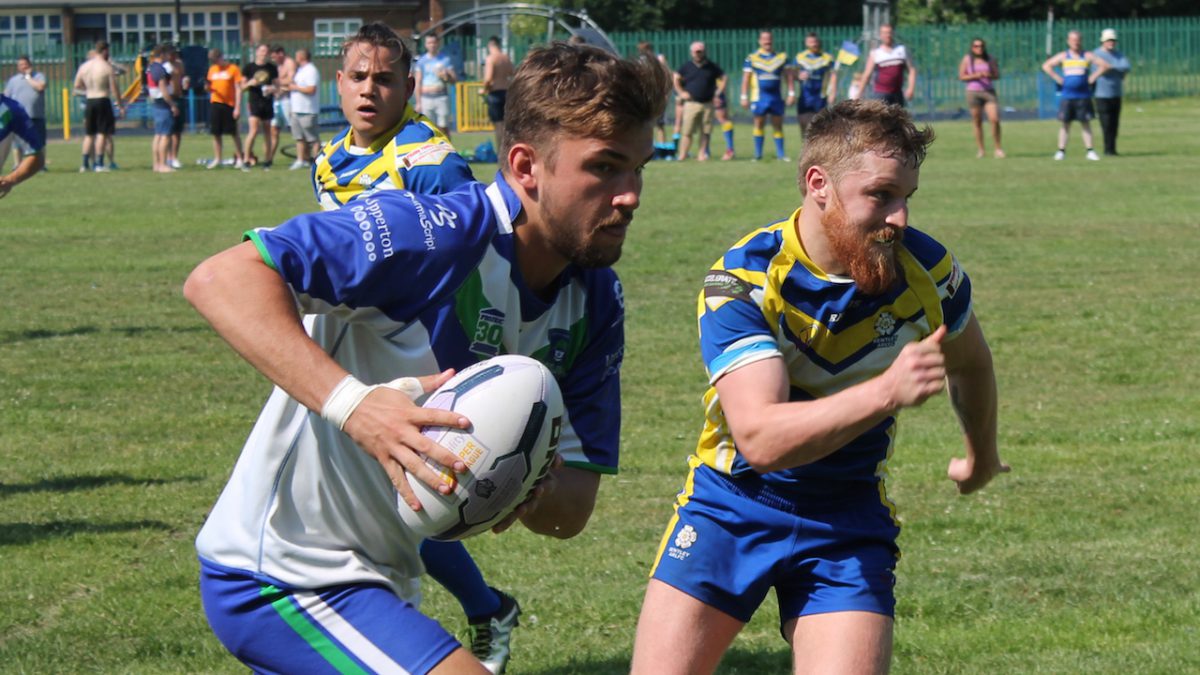 Nottingham Outlaws suffered another agonising defeat in the blistering heat at Bentley on Saturday. Despite dominating the game for long periods they missed a series of golden opportunities to score and were then punished at the death, slipping to a 24-18 defeat.

Once again the coaching staff had to contend with another series of changes to the line, indeed there were no fewer than ten changes to the seventeen man squad that ran out the previous weekend against East Hull, including two new debutants Fergus Campbell and Lukas Marshall.

The match started with the Outlaws playing into a strong breeze but they made light of the elements, starting well with some good opening defence that held out against a series of opening attacks by the home side.

Having weathered the early storm the Outlaws hit back and they scored with their first attack of the game. They first forced a drop out under the sticks and off the back of this pressure Alex Whittle moved the ball back inside and livewire loose forward Alex Wright left the home defence flat footed for a well taken try. Ciaran Dean added the extras to open up an early 6-0 lead for the Outlaws with nine minutes played.

The home side soon hit back, using their big forwards to make good yards around the play the ball. Dominating field position they gave the Outlaws a lesson in how to take convert pressure into points as Shaun Archer and Lyndon Staley score quick fire try’s to first level and then push the home side out in front at 12-6 after twenty minutes of end to end action.

Despite the reversal on the score board, the Outlaws were still enjoying plenty of pressure and they finally made it pay after twenty five minutes when a well weighted kick by Alex Whittle sat up nicely in goal and Ciaran Dean pounced for a four-pointer and then went one better by adding the extras to level the match at 12-12.

Indeed things seemed to be moving in the Outlaws favour as the home side had a man sent off for punching to give the Outlaws a one-man advantage for the remainder of the game.

Stung by this reversal the home side hit back . Poor numbering-up on the right hand side of the Outlaws defence and some fine handling by the home side saw Rob Baskerville slide in at the corner for a well-taken Bentley score that nudged the home side ahead 18-12.

As the clock ticked down the Outlaws mounted one last attack and they levelled the score at 18-all when a great Outlaws attack saw Paul Calland break clear and he slipped the ball to Adam Simm who dived over for a great score. Dean added the extras to close out an absorbing first half.

The half time whistle saw the players head for cooler shade and much needed refreshments whilst the coaching staff re-jigged the team as youngsters  Fergus Campbell and Lukas Marshall both came on to pep up the side.

The Outlaws went straight on the attack from the re-start and they went on to dominate the third quarter of the game. Indeed for twenty minutes the match was played almost exclusively in the home sides forty metre zone but the Outlaws failed to turn pressure into points, forcing the pass or over-complicating when calmer play would have yielded points!

After thirty minutes of second half play the scoreboard hadn’t moved and both sides seemed to be flagging like two heavy weight boxers that had given everything in the blistering heat!

With ten minutes to go the home side managed to get into the Outlaws twenty metre zone for only the third time in the half and they made the Outlaws pay for their inability to take chances. The try came after a penalty marched them into the Outlaws red-zone and Jordan Clegg barged over the line to put the home side 24-18 in front with the clock ticking down.

In a final ten minutes of furious action the Outlaws pummelled the home line, and twice in this period they should have scored but failed to capitalise on golden opportunities.

The first chance came  when they broke clear on the left but with the line at their mercy they hesitated and were bundled into touch and then Ciaran Dean looked like he was over in the right hand corner only to lose the ball in the act of grounding.

The final whistle came soon after and the disappointed Outlaws team reflected on another defeat in a game they could and probably should have won.

Despite the loss, the morale in the camp remained high and there was plenty of applause when prop forward Sam Andrews was named man of the match for a great performance against larger opponents in the blistering heat.

Thankfully the Outlaws have a two week break as the fixture list reaches the half-way stage  and the Outlaws find themselves with only two wins out of nine games. Indeed they now sit in ninth place in the Yorkshire Premier Division. However they have more than held their own in most matches they have subsequently lost and the coaching staff remain confident that the second half of the season will see better things from an Outlaws perspective!