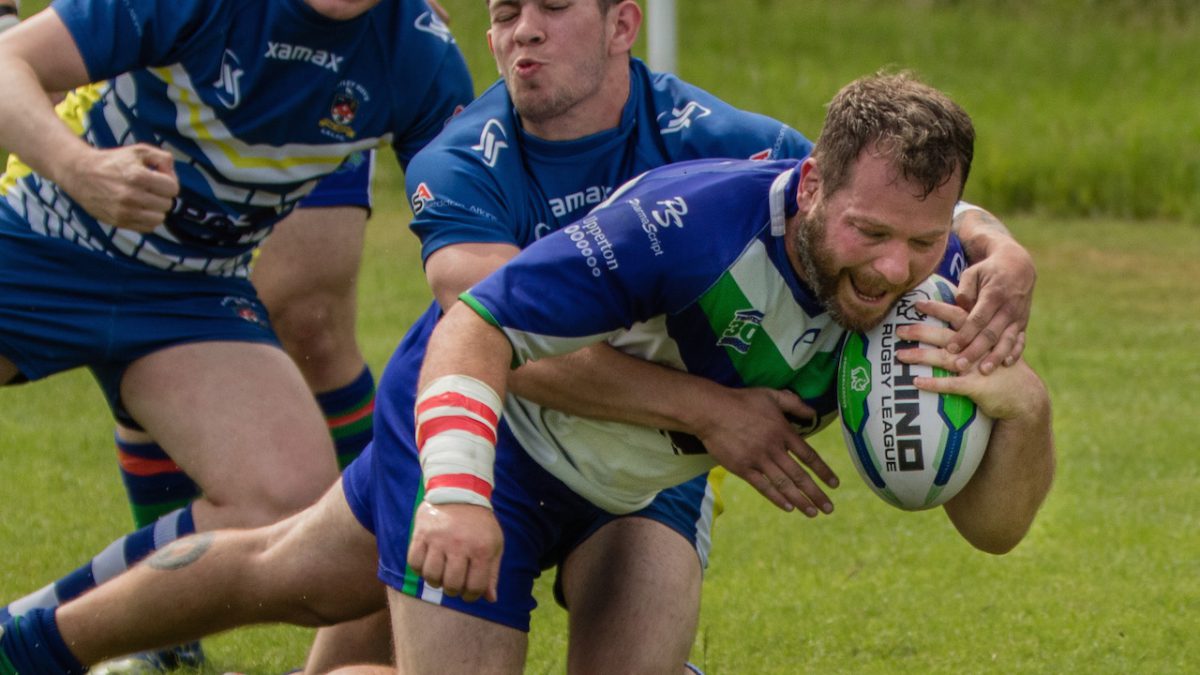 Nottingham Outlaws entertained unbeaten Batley Boys in a Yorkshire League Premier tie at Highfields on Saturday. In a highly entertaining game the Outlaws took the lead on three occasions before they finally ran out of gas towards the end and slipped to a disappointing 30-22 defeat against the league leaders.

The Outlaws went into the game sporting a number of changes to the side that showed much improvement in the last match against Beverley. Indeed they had a whole new front row as teenage props Conor Foulkes and Chris Rudkin joined returning hooker Chris Prime.

Other changes came in the backs with Dan Crabtree teaming up at left centre with winger Adrian Chaima whilst Adam Cunliffe went back to his more accustomed full back slot.

The Outlaws started shakily but seemed to have weathered the early storm only for Josh Whitehead to power over from acting half to make it 4-0 to the visitors after 5 minutes of mostly Batley pressure.

Stung by this reversal, the Outlaws hit back, forcing a Batley error and from the resulting set George Strachan put in a wicked grubber that saw Ali Waring pounce and score his first try for the club, levelling the scores at 4-4.

The Outlaws score seemed to instil more confidence in the home team and as they piled on the pressure Adrian Chaima almost scored only to be denied when the ball squirted free.

The pressure remained though and a wonderful flowing move saw Cunliffe latch onto the end of a strong Dale break and as the defence closed in Paul Calland was on hand to finish the move that put the Outlaws ahead. Dean converted to put the Outlaws in front for the first time at 10-4 with 30 minutes on the clock.

Batley soon showed their league leaders form and speed of thought, punishing the Outlaws again for some slack defending at the play the ball and this time it was Josh Knowles who did the damage, scooting over to level the scores at 10-10 with three minutes left to the break.

As the clock ticked down there was just enough time for one more Outlaws attack and it was the old reverse pass from Calland to Strachan that did the damage, again resulting in Strachan going over the line despite plenty of attention. Dean added the extras superbly from the corner and at 16-10 the Outlaws appeared on the way to a major shock as the first half came to a close.

The coaching staff made a few half time changes with Simm and Andrews both coming on to breath some fresh life into the team.

The second half saw the Outlaws playing into the breeze and they failed to hit the ground running. Straight from the re-start the Outlaws were on the back foot with a series of quick play the balls from a well drilled Batley outfit. Indeed with less than two minutes of the second stanza played, the visitors were level when Josh Knowles bagged his second to make it 16-16.

Once again the Outlaws rallied and some good work in the forwards took them to the Batley try line and Chris Prime powered over from short range, a trademark effort from the powerful hooker and for the third time in the game the Outlaws were in front. Crabtree added the extras to nudge the Outlaws ahead at 22-16.

As the second half progressed the Batley Boys began to slowly but surely take a strangle hold of the game. With better composure they started to starve the Outlaws of possession and field position, much the same way as Beverley had done the previous week.

With dominant territorial advantage the Batley outfit soon started racking up the points. Indeed in a devastating 10 minute spell they posted three unanswered try’s that  emphasised why they are currently top of the league.

The damage started on the 65th minute when Matt Shield went over from a crash ball at short range to level at 22-22.

Four minutes later Joe O’Hanlon went over after a mid-field break to nudge the Batley Boys into the front for the first time since the fourth minute. This was followed two minutes later by a try from Josh Richter.

All in all, a devastating three try burst in 10 minutes had seen the Outlaws lead evaporate and the league leaders build up a healthy two score lead at 30-22.

Despite the reversals the Outlaws tried to pull back but the visiting defence held firm and the game ended with no further scores.

As the players exchanged handshakes there was a slight pause for the announcement of the man of the match which went deservedly to teenage prop Conor Foulkes who played his best game by far this season.

After the game coach Strachan expressed his frustrations at the outcome, adding “In the first half we played some of the best rugby we’ve managed so far this season and I felt we were the better of the two sides. Unfortunately we couldn’t match that in the second half. We ran out of energy and lost control of the play-the-ball. I’m hoping we can keep our combinations the same for next weeks game as we’ve really missed that continuity so far this season”.

Indeed next weeks home game against east Hull is something of a must win game if the Outlaws are to kick-start their season and start to climb back up the league table.