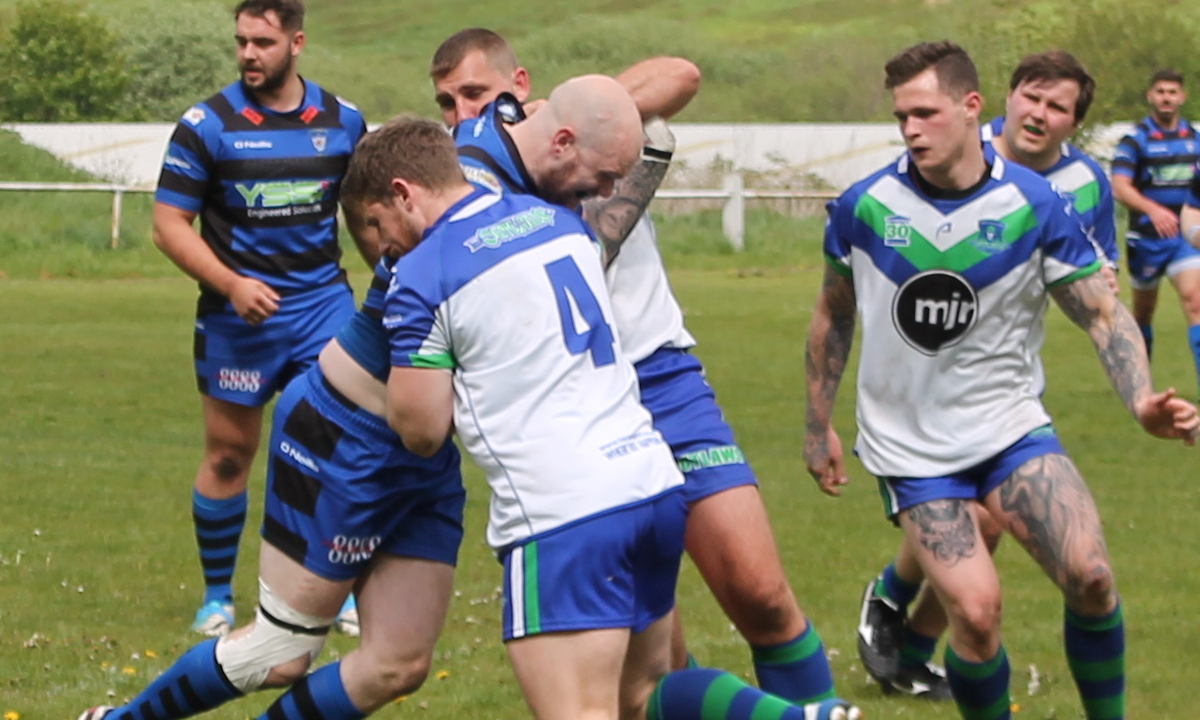 Nottingham Outlaws suffered a heavy 54-12 defeat in their Yorkshire Premier League match at Queensbury on Saturday. A much changed Outlaws unit did its best to keep up with the larger, physically dominat home team. However with the core of the pack missing it was not much of a surprise that Outlaws gave a disjointed display and whilst they remained within reach in the first half they leaked no fewer than eight second half tries as the dominat home team put them to the sword.

The Outlaws went into the fixture with back to back wins under their belt from back in April. However a three week gap in the fixture list meant they went into the game somewhat rusty.  In addition the squad that travelled up to Yorkshire contained no fewer than seven changes to the one that brought home the points last time out including three players making their debut and two playing their first of the season.

Yet again there were changes in the halves as  James Young stepped up from the Development side to partner Alex Whittle in the all important play making roles whilst student international Adrian Chaima returned to the wing alongside centre Nathan Hill to add some try scoring power to the backs.

The main changes were in the pack with regulars Strachan and Dale both injured and with tearaway second rowers Wright and  Ward also missing  a new-look back row containing Waring, Lamble and Wetham had to be hastily assembled.

The Outlaws could not have made a worse start if they tried as they lost the ball in the second tackle from receiving the kick off and with the Outlaws defence still on the team bus the home side scooted in from the scrum to open a 4-0 lead with less than 2 minutes on the clock!

Despite the poor start the Outlaws battled their way back into the game and after a series of raids they equalised the score after forcing back to back sets. The try came on the back of a good break from Ali Waring and good hands saw Mitch O’Brien sneak in at the corner. The conversion attempt went just wide but at 4-4 the Outlaws had got back on level terms.

Indeed for the remainder of the first quarter the Outlaws held the upper hand and territorial dominance and it looked like they might take something from the game. Indeed Nathan Hill in particular looked like he might forge a try with his footwork but he never quite received the ball in a position where he could do real damage.

Despite being on top for most  of the first quarter the Outlaws eventually failed to take advantage of their dominance and as so often happens in sport they were made to pay for not capitalising on their chances!

The problems began in the 23rd minute when back to back sets saw the Queensbury side put enormous pressure on the Nottingham line and as the Outlaws defence hesitated Queensbiry crept back in front with a well worked try in the corner to put the home side ahead again at 10-4.

The Queensbury try, somewhat against the run of play, seemed to knock the stuffing out of the Outlaws who leaked another try straight from the restart when Queensbury fielded the kick off and ran straight through what can only be described as woeful Outlaws defence to score with hardly a hand laid on them to extend the home lead to 16-4.

Despite the setback the Outlaws managed to regain some composure and good hands on the stroke of half time saw Adam  Cunliffe squeeze over in the corner to reduce the deficit to 16-8 and the Outlaws were back in the game at the end of a fairly even first half.

During the break the Outlaws coaching team tried to breathe some life into the pack with Andy Musvabari and Connor Foulkes coming off the bench to add some go forward to an Outlaws pack that was starting to fall off the tackle towards the end of the first stanza.

The second half started in pretty much identical fashion to the first with the Outlaws conceding back to back sets after a soft penalty and with five second half minutes gone the home side used the early possession to build in their lead with another try to make it 20-8 to the home team.

With the game  starting to slip away from them the Outlaws had to endure what can only be described as a twenty minute horror show between the 45th and 65th minute when they leaked 4 unanswered tries as their defence tired dramatically.

Indeed three of the home try’s came from simple drives down the middle of the pitch and in all cases the tiring Outlaws defence missed basic one-on-one tackles. As the score reached 44-8 the Outlaws had hardly got out of their own half as a now buoyant home side looked like they might score after every set of six!

To their credit the Outlaws tried their best to mount some sort of response and they got some reward when hard working scrum half Alex Whittle placed a lovely weighted kick into the Queensbury in-goal area that saw Adam Cunlife pounce for his second of the game to temporary halt the slide and reduce the deficit to 44-12.

Unfortunately the Cunliffe score marked only a brief respite and as the Outlaws began to run out of gas they leaked two more trys in the closing stages to finish a well beaten team at 54-12.

After the whistle the defeated Outlaws retreated to the dressing rooms to lick their wounds and re-group. There were few players in with a shout for the man of the match award. Alex Whittle and Adam Cunliffe were both in the frame but it was the returning Ali Waring who grabbed the bubbly, showing plenty of promise on his return to the side