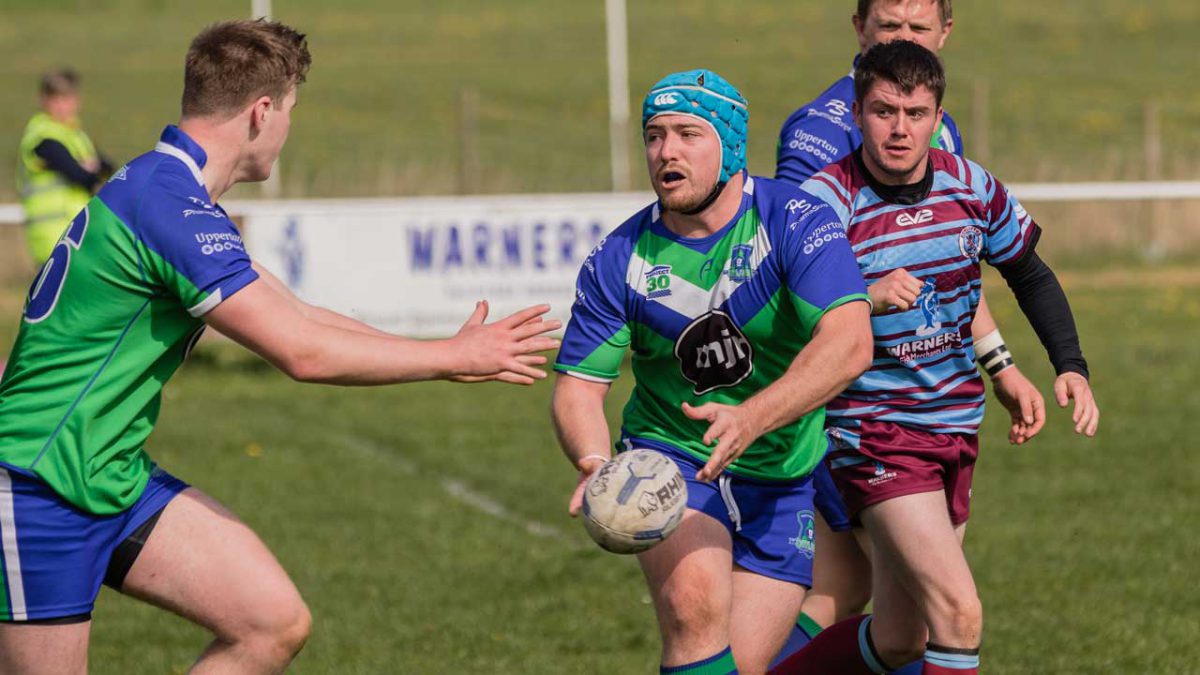 Nottingham Outlaws achieved back to back Yorkshire Premier League victories on Saturday when they recorded a stunning 48-16 victory over Doncaster outfit Toll Bar. The Outlaws had to battle hard for much of the game before a four try salvo in the last twenty minutes saw them pull away from last seasons runners-up to make it two wins on the bounce against sides from Doncaster having disposed of Bentley last time out.

Yet again a number of changes were made to the team that did well last time out, including a number of late amendments to the side announced on Wednesday as Chris Parr and Nathan Hill both missed out with a flu bug that struck the camp on Thursday.

The halves saw yet another change as regular number seven Alex whittle returned to the fray after missing the opening two matches with a hamstring injury. Whittle teamed up with Strachan in the crucial play making roles, freeing up Cunliffe to return to the number one slot whilst Reece Needham went in to the vacant centre spot.

The rest of the pack also showed a number of changes as powerful army international Tom Howley came in for his first game of the season whilst young winger Mitchell O’Brien was brought into the side for his debut. On the bench Ciaran Dean and Conor Foulkes both came in for their first hit outs of the new campaign joining Elliot Wetham and Stew Readhead  in the replacements.

The Outlaws began the match playing up the slope and into a slight breeze but they immediately made light of the disadvantage, forcing back to back sets in the opening exchanges and with only five minutes on the clock they hit the front when Reece Needham slipped the ball out of the tackle and Mitchell O’Brien swooped in for a debut try with his first touch of the ball! The conversion just shaded the wrong side of the post but at 4-0 the Outlaws were in front. It was a lead they were destined to keep for the remainder of the game.

The Outlaws continued to dominate proceedings in the opening quarter, with Wright, Ephraim and Howley having a field day down the middle as they used their size and speed to punch holes in the middle of the Toll Bar defence and on the back of this the Outlaws continued to lay siege to the home line. When hooker Chris Prime powered over from acting half on the tenth minute and Cunliffe added the extras the Outlaws had a 10-0 lead, scoring at a point a minute and a big victory seemed on the cards.

Having taken an early hold of the game the Outlaws seemed well set to take control but some sloppy play saw them drop the ball on the edge of their forty and the enthusiastic home fans at last had something to shout about as  Owen Wedgwood opened the scoring for Toll Bar to cut the Outlaws lead to 10-6.

Despite the setback the Outlaws continued to dominate field position and their ten point lead was soon restored when that man Prime bagged his second try, a carbon copy of the first, as the big front rower plunged over once again from acting half to grab a brace. Ciaran Dean added the extras from bang in front to put the Outlaws two scores ahead at 16-6.

Once again the Outlaws almost invited the home side back into the game with some loose play and they nearly capitalised on the invite when they broke clear down the left but a superb chase by Reece Needham and a follow up tackle by Stew Readhead rescued the Outlaws when a home try seemed a dead cert!

Having played their get out of jail card the Outlaws had time to mount one more attacking foray of their own and with the clock ticking down they extended their lead when a loose ball saw both sets of players hesitate momentarily. Alex Whittle swooped on the bouncing ball before moving it out wide to the right and Sam Campbell dived in at the corner to close out the first half with the Outlaws ahead but not yet in control at 20-6.

The coaching team used the half time break to re-shuffle the pack as Elliot Wetham and Conor Foulkes came on to pep up the front six and livewire halfback Ciaran Dean moved into the number nine roll.

Despite the advantage of the slope the Outlaws found themselves on the back foot in the opening ten minutes of the second stanza, having again invited the home side back into the game with a soft penalty and a dropped ball. A change of tactic also added the pressure as the big Toll Bar forwards began to offload in the tackle, causing confusion and opening holes in an Outlaws defence that had seemed rock solid for most of the first half.

With the home side having more and more of the play it wasn’t long before they reduced the deficit as Austin Hunter grabbed a try and with the successful conversion the Outlaws lead was reduced to 20-12 with thirty minutes left on the clock.

With the home team in the ascendancy the next try was absolutely vital and thankfully for the travelling faithful it was the Outlaws that got it!

The try came from a beautifully weighted kick from the returning Alex Whittle and the ball appeared to be going dead only for Coryn Ward to dive onto the ball for a fine try that extended the  Outlaws lead to 26 -12 with Dean once again adding the extras.

The home side refused to back down and the Outlaws lead was cut back yet again when Owen Wedgwood grabbed his second of the game to once again excite the home fans and reduce the Outlaws lead to ten points at 26-16.

With sixteen minutes left to play the Outlaws were far from home and dry but a devastating try scoring burst from the Outlaws saw them run in four unanswered scores in a devastating twelve minute spell that saw them finally pull away from their rapidly tiring hosts.

The late salvo was instigated by half back maestro Alex Whittle who had earlier set up Ward with a try from a chip kick and he repeated the act setting up Ward for his second, this time using his passing skills to set Coryn Ward clear for fine brace.

The next score in the try Tsunami came from powerful winger Sam Campbell who completed his brace after receiving a fine pass from Jimmy Goodwin, scoring under the sticks for a nailed on six pointer. Whittle then went one better, turning from try maker to try scorer with a great solo effort using his trademark show and go to glide through the Toll Bar line for a try under the sticks.

The final try in the scoring melee deservedly went to player coach George Strachan who shaped to pass left and right before taking route one, running over the top of the home fullback to score under the sticks. Dean added the extras to make it 48-16 to the Outlaws as the referee brought proceedings to a close as the travelling fans applauded their heroes for a job well done.

There was still one more job to do however, the man of the match champagne was brought out of the fridge and it was big Tom Howley that took it home with a fine stint in his first hit-out of the season.

After the game Outlaws often hard to please coach George Strachan was still not 100% happy with events commenting “As a coach you’re rarely happy and even a good win like today leaves plenty of room for improvement. We’re still not as organised as I’d like us to be but it was a step in the right direction and we caused them problems from minute one. Defensively we did some things really well and we had some very dominant sets but overall I think giving up 16 points was a bit disappointing.”

Despite the room for improvement Strachan was quick to praise several of his charges, adding “I was pleased with Mitch on his debut as he was very solid, scored with his first touch, and his efforts going forward brought us a few penalties, so a good day at the office. Other notable performances were Chris Prime who put in a few bell-ringers and was well worth his two tries, and Tom Howley who knocked alot of wind out of them in the middle with his carries.”

Final word of the day was for Coryn Ward who played his last game in an Outlaws shirt before heading for a playing stint in Australia. His two tries were typical of the terrier-like second rower and he will be badly missed in the coming weeks both on and off the field.