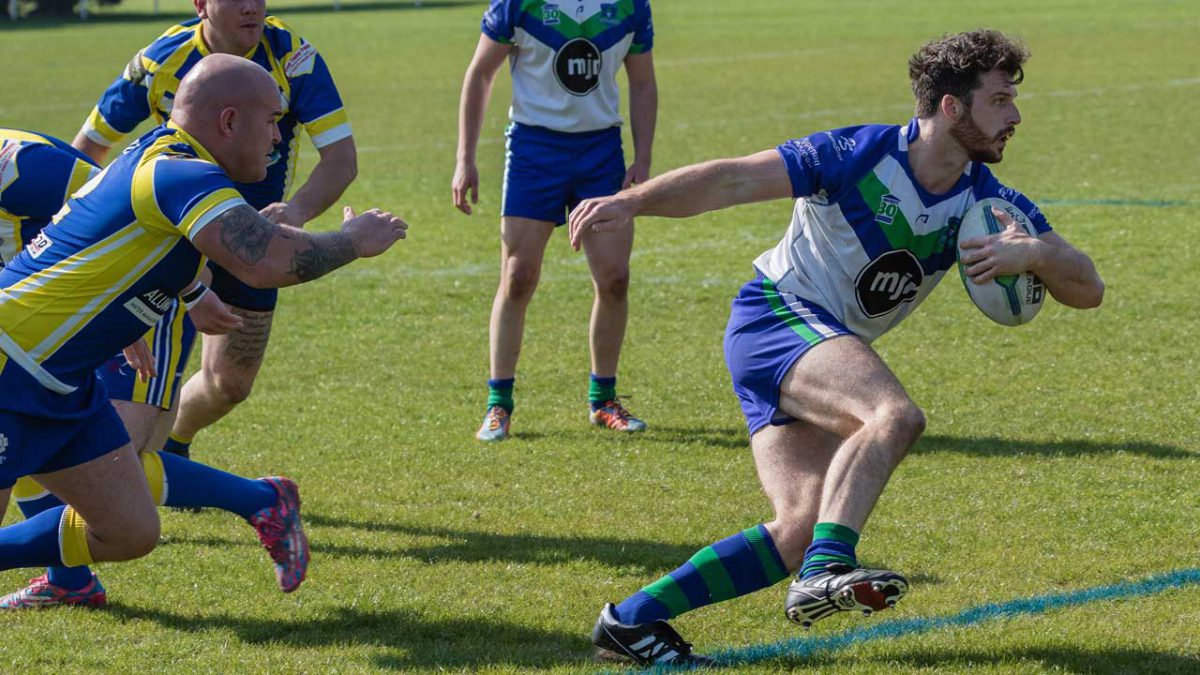 Nottingham Outlaws beat newly promoted Bentley by an impressive 44-20 margin at Highfields on Saturday and in doing so recorded their first win in the Yorkshire Premier League whilst also easing the pain of last weeks heavy defeat at Siddal.

The Omens didn’t appear great when coach Strachan had to make yet more wholesale changes to his starting line up. Indeed the initial side selected had no fewer than seven changes to the squad that went to Siddal and there were more to come as a late fitness test ruled out halfback Mitch O’Brien forcing Strachan to team up with Adam Cunliffe in the halves with Dan Crabtree filling the vacant full back role.

The side also showed a number of changes in the backs with a new centre partnership as powerhouse Jimmy Goodwin teamed up with try scoring machine Nathan Hill allowing Sam Campbell to return to his more usual wing position and on the bench evergreen utility forward Stewart Readhead came back into the side after a couple of seasons out of the game.

Despite the reshuffle the Outlaws made a dream start, forcing a Bentley error at the end of the Outlaws first set and from the ensuing scrum they opened their account when Jimmy Goodwin went on a powerful surge down the left centre channel before releasing winger Chris Parr who slid in at the corner to make it 4-0 to the Outlaws with three minutes on the clock.

The Outlaws piled on the early pressure but in similar fashion to the Siddal game they failed to capitalise  by dropping the ball twice in good early positions and they were made to pay for their profligacy when Bentley levelled the scores on the  tenth minute with Marty Hall grabbing a try in the corner in their first foray into the Outlaws red zone.

Despite the set back the Outlaws were still very much on top territorially and within five minutes they were back in front when Dan Crabtree capitalised on a Bentley error. As the ball went free from a loose play the ball Crabtree reacted quickest to pick up the ball and scoot away for an opportunistic try.

Dan Wilson add the extras and the Outlaws were back in the lead at 10-4 with 25 minutes played. It was a lead they were destined to keep for the remainder of the game!

The match seemed to be developing into a bit of  a see-saw affair as Marty Hall cut the deficit by scoring his second for Bentley to peg the Outlaws lead back to 10-8 but a stunning two try salvo by the Outlaws in the final five minutes of the half saw them open up a commanding lead.

The first came off the back of a clever chip through by Strachan which sat up nicely for the effervescent Oliver Dale to pounce and the second came from the handling skills of the player coach who put bustling centre Jimmy Goodwin into space and at short range there was only ever going to be one outcome as the big number four powered over.

Straight after the Wilson conversion the referee brought the first stanza to a close and the score board showing a healthy 22-8 lead for the Outlaws.

Coach Strachan used the break to reshuffle his forwards who had stood up well to a big Bentley front six, bringing on Dave Challenger for his league debut and Stewart Readhead to add some experience to the front row.

The Outlaws started the second half in somewhat lacklustre fashion, dropping the ball early in the tackle count on two occasions, inviting Bentley back into the game. The poor start was seized on by Bentley and they soon took advantage of this loose play by trimming the Outlaws lead back to 22-12 with a try by Purnell.

The early exchanges had all been in the Outlaws half but at last the home team managed to get back into the visitors red zone and off the back of repeat sets. Adam Cunliffe took the ball from the scrum and set free Nathan Hill who showed his scoring abilities by scorching through the Bentley defence for a superb try. Wilson added the extras from bang in front to make it 28-12 to the Outlaws.

As the match entered the last quarter the larger Bentley forwards seemed to be tiring visibly in the heat and as the Outlaws stepped on the gas the visiting defence began to fall off the tackle. The platform for the Outlaws dominance came on the back of good work the forwards, led by the energetic Alex Wright who was made big inroads down the middle every time he took the ball.

On the back of this dominance the Outlaws ran in three quick-fire tries to effectively seal the game.

The first came when Jimmy Goodwin crashed over in the corner for his second of the game and then Coryn Ward picked up a loose ball and sprinted fully eighty metres for a superb solo effort. The final try came when Strachan put in yet another tricky grubber into the Bentley in-goal area and this time it was Cunliffe who pounced for his first of the game.

To their credit Bentley kept plugging away and another try by Purnell and one on the stroke of full time by Archer saw Bentley get some reward for their efforts. However the win was never in doubt at this stage and the referee brought the match to a close with the Outlaws recording an emphatic 44-20 victory.

After the game there was a double celebration for player coach George Strachan. First he picked up a trophy to commemorate his 200th game for the Outlaws and promptly followed it with the man of the match award for a fine game, setting up several tries with crisp passing and some excellent attacking kicks.