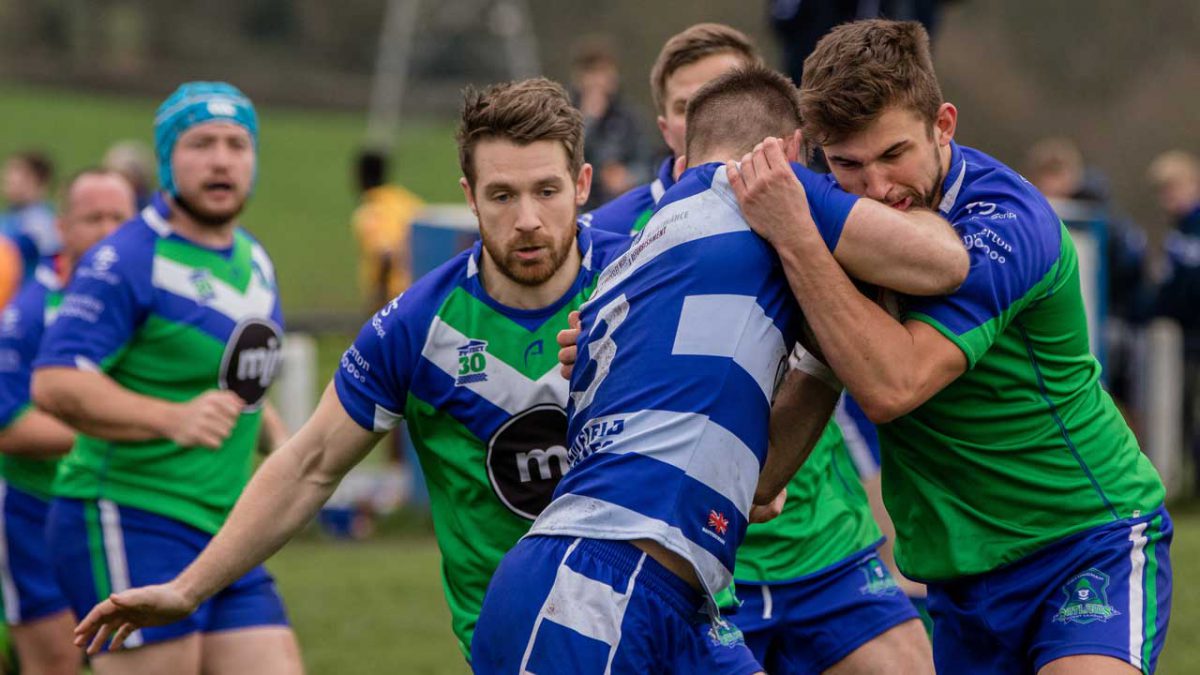 Nottingham Outlaws played their first game in the Yorkshire Premier Division on Saturday. In a fast moving game the Nottingham players came up against a slick-handling Siddal Academy side that gave them something of a rugby league lesson in an emphatic 62-6 demolition of the Outlaws.

Pre-match plans by Coach Strachan went pretty much out of the window when Reece Needham, Dan Wilson and number seven Alex Whittle all failed late fitness tests which meant a major last-minute re-shuffle of the team. Indeed wingers Sam Campbell and Adrian Chaima both moved into the centres with the evergreen Steve Page appearing on the right wing with Chris Parr completing the re-shuffle on the left wing for a completely new-look back line.

The halves saw Adam Simm slot in for the injured Whittle to partner rookie number six Ciaran Dean to give the Outlaws a new looking half back combination.

The match seemed to start reasonably well for the Outlaws who appeared to cope well in the opening exchanges but after eight minutes of fairly even play the Outlaws found themselves conceding a try. The score came after they gave away  a rather soft penalty on the last tackle and they were ruthlessly put to the sword by a Siddal side that was in no mood to pass over such a welcome gift.

Indeed, the ability of Siddal to capitalise on the Outlaws errors with ruthless efficiency was to become something of a feature of the afternoons events!

Having fallen behind on the back of their indiscretions the Outlaws failed to learn their lesson and they did exactly the same again on the 18th minute, having defended well they gave away another penalty on the last tackle and were duly punished by a Siddal side who didn’t need a second invitation as they ruthlessly exploited their possession to make it 12-0 to the home side.

Despite more good work in defence the Outlaws could make little headway against a well drilled Siddal defensive line and it wasn’t long before the home side extended their lead to 18-0 on the back of another penalty conceded by the Outlaws.

With ten first half minutes remaining theOutlaws at last managed to get into the home teams red zone for only the second time in the game and they made it count when Adam Simm forced his way over from short range to finally open the Outlaws account and cut the deficit to 18-6 as Dean added the extras for out wide.

With eight first half minutes remaining it was imperative that theOutlaws were to score next if they were to have any chance of getting back into the game. However three somewhat harsh penalties piggybacked the Siddal team into the Outlaws red zone and they showed their ruthless ability to exploit their field position and pressure by notching two further scores to finish the first stanza with an unassailable 28-6 lead.

A somewhat shell shocked Outlaws team headed for the changing rooms having been given something of a lesson in finishing by a red hot Siddal attack. However there was little that coach Strachan could do to revitalise his team during the interval other than reiterate the need to reduce the penalty count and continue to put numbers into the tackle.

The second half started with the Outlaws looking much better on defence and indeed the Outlaws more than held their own during the opening exchanges of the second stanza. Indeed forwards Strachan, Wright and Dale all put in a useful opening stints to seemingly steady the Outlaws ship but then disaster struck.

The problem started when forward Sam Andrews was somewhat harshly sin-binned for a technical offence. With the Outlaws down to twelve men the Siddal points scoring machine went on something of a point scoring rampage, notching three converted trys in eight blistering minutes to stretch their lead to 46-6

When the Outlaws finally got back to full strength they managed to stem the tide somewhat. Indeed between the 60th and 70yth minute they had probably their best spell of the match but despite repeated attempts by the industrious halfback pairing Dean and Simm they lacked the cutting edge to capitalise on their field position and possession.

The Outlaws mini revival eventually faded without any addition to their tally and in somewhat clinical fashssion the Siddal side cut loose again, notching another three unanswered try’s to wrap up the game in emphatic fashion with a convincing 62-6 victory for the dominant home side.

As the players returned to the changing rooms there was a momentary pause whilst the man of the match was announced. There were a few players in the but the award went to hard working prop Alex Wright who continued his good start to the season with another excellent performance despite the pack spending most of the match on the back foot

After the game Coach Strachan was in philosophical mood, commenting ‘As players we want to be tested and I think you could see today that we  came up short. In recent years we have played teams where, if your fundamentals aren’t quite right, you can still come out on top. However we are now playing teams who know the game better so we need to be a bit more focussed. I think physically we matched up fine we just had plenty of lapses with and without the ball. Three good tackles a set won’t win games anymore which is where we need to improve. I’m looking forward to us putting things right for next weeks game’

Indeed, the Outlaws don’t have to wait along before they face another stiff test, this time in the shape of a powerful Bentley outfit who hail from Doncaster and travel to Highfields next Saturday.